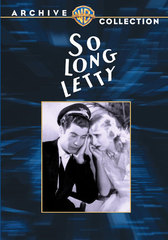 Where's That Been? - So Long Letty

Gangly comedienne Charlotte Greenwood was making her mark on the Broadway stage in productions like The Tik-Tok Man of Oz and Pretty Mrs. Smith (a musical comedy that she literally stole out from under its star, Fritzi Scheff) when producer Oliver Morosco fashioned So Long, Letty for her in 1916.The success of that show led to several follow-ups - Linger Longer, Letty, Let 'Er Go, Letty, Letty Pepper - while the original Letty was adapted for the silver screen in 1920.Greenwood was pushed aside for the movie version (her role was played by Grace Darmond) that served as an early showcase for silent screen favorite Colleen Moore.

Charlotte would eventually get her chance to reprise her stage success nine years later, when So Long Letty (sans comma) went before the cameras at Warner Bros.Greenwood's motion picture resume at that time was limited to a few appearances in silent films, so it was no doubt a heady experience for the actress-dancer: a starring role (for which she was paid 0,000) in a feature-length talkie.Though her antics in Letty received high critical praise (The Film Daily raved: 'Picture fans who never had the pleasure of seeing and hearing the lanky and limber Charlotte Greenwood are pretty sure to get a heap of enjoyment out of seeing her cavort') the film, sadly, was only a middling success at the box office.  Fortunately for fans of the incomparable Greenwood, it would not keep her out of future motion pictures...and besides, it freed up time for even more Broadway success.

A resort hotel at Ardmore Beach welcomes ketchup-and-tomato tycoon Claude Davis (Claude Gillingwater) and his granddaughters, Ruth (Marion Byron) and Sally (Helen Foster), as their newest guests - but no sooner have the Davises settled into their room when they are set upon by force-of-nature Letitia 'Letty' Robbins.Letty, a self-described 'Queen of the Beauty Parlor,' offers the services of her establishment to the two girls...much to the annoyance of the dyspeptic Claude. Davis decrees 'that tall creature' to be an abominable woman, and is practically set to check out of the hotel.

In one of those coincidences that seems to take place only in musical comedies, Claude's nephew Tommy (Bert Roach) - whom he's in town to see - is married to 'that tall creature.'  But the union of Letty and Tommy is not a happy one; Tommy is aggravated by his wife's slatternly housekeeping and lack of culinary skills.He prefers the company of neighbor Grace Miller (Patsy Ruth Miller), a hausfrau whose husband Harry (Grant Withers) doesn't appreciate her attentiveness to keeping the house tidy and good cooking.A mix-up leads Claude to believe that Tommy and Grace are actually happy-ever-aftering...and he's disturbed that the unfortunate 'couple' live next door to his adopted nemesis Letty.

Tommy and Harry are ready to come to blows over the marital misunderstanding...but then the broadminded men have an idea: why not swap spouses (Wife swapping?  In 1929?  Quel controversy!).In the time-honored tradition of teaching their idiotic better halves a lesson, Letty and Grace agree to the arrangement (on a trial basis that is scheduled to last a week)...but soon both Tommy and Harry learn that the grass is always greener on the other side of the fence.

I describe Ms. Greenwood as a 'force-of-nature' because despite her modest success on the silver screen, the movies always seemed too small to contain Charlotte's expansive presence.Six feet tall and renowned for her high kicks, Greenwood once deadpanned that she was the 'only woman in the world who could kick a giraffe in the eye.'  The loose-limbed comedienne makes me giggle merely by stepping over a divan or piano bench, and possessed not only a ready way with a wisecrack but a pleasing singing voice to boot.She gets an opportunity to sing several tunes in Letty, including 'My Strongest Weakness is You' - but I think my personal favorite is 'Clowning,' which she performs in a raucous party sequence with co-stars Roach and Withers.

There's nothing really cinematic about So Long Letty: its early talkie origins make it creak a bit, and the direction by Warner journeyman Lloyd Bacon is stagey and not particularly inspired.But I found myself chuckling at many of the witty lines (courtesy of Robert Lord and Arthur Caesar) sprinkled throughout the proceedings, and in addition to the effervescence of Greenwood there's a hilarious performance from Gillingwater as cranky Uncle Claude. (Told by his granddaughters that the two men with which they're conversing are fellow schoolmates he snaps: 'Well, school is over.')

On a personal note, I particularly enjoyed the presence of Marion Byron, an underrated comedienne that I became acquainted with when I watched the three two-reel comedies (including the 1928 classic A Pair of Tights) she made with Anita Garvin during their stint at the Hal Roach studios.Byron was nicknamed 'Peanuts' (you can hear Greenwood call her this during the party sequence) and turns up in a few early Warner Bros. features as well as playing Buster Keaton's leading lady in Steamboat Bill, Jr. (1928); in Letty she performs a cute little duet, 'One Sweet Little Yes,' with Grant Withers.

Charlotte Greenwood would eventually find her footing in motion picture musicals as a character presence in many of 20th Century Fox's Technicolor classics in the 1940s; Down Argentine Way (1940), Moon Over Miami (1941), and The Gang's All Here (1943) are just a few of her Fox titles available on DVD.I have a soft spot for Char's antics in Parlor, Bedroom and Bath (1931), because she's one of the bright spots in what is admittedly not one of Buster Keaton's strongest comedies (though the two comics are clearly having a ball working together); she also provided solid support for Bert Lahr (Flying High) and Eddie Cantor (Palmy Days). Greenwood's best remembered movie role, however, remains that of Aunt Eller in Oklahoma! (1955), the film version of the mega-successful Rodgers and Hammerstein musical.