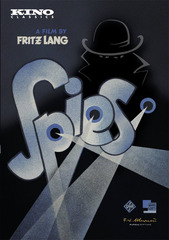 Where's That Been? - Spies

When asked in later years about his 1928 espionage thriller Spione (or Spies, to use its English title), director Fritz Lang would dismissively describe it as 'a small film with lots of action.' As befitting a movie with 'spies' as the title, Lang isn't exaggerating at all: there's an edge-of-your-seat car chase that follows a nail-biting train wreck, and a daring rescue-at-the-last-minute as evidence of Spione's action bona fides. But the film is often overlooked by Lang cultists for the easily explained reason that it falls between the silent science-fiction masterpiece Metropolis (1926) and the audacious Woman in the Moon (1929) in the director's enormous oeuvre.

For many years, Spies was out of the public eye until a restoration of the feature was undertaken by the F.W. Murnau Stiftung in 2004, using a number of extant prints but with a concentration on a surviving nitrate copy in a Prague film archive. Kino-Lorber introduced a 2K restoration version to DVD in November that same year, and just recently released the film in a Blu-ray version in February. It's a definite must-see if you're a fan of Fritz Lang's work, with echoes of his earlier productions and influences of movies yet to come.

A man named Haghi (Rudolf Klein-Rogge) presents himself to the public as a mild-mannered bank director, but his true identity is that of a criminal mastermind who heads up an organization of espionage agents. A series of high-profile assassinations (and a stolen document or two) carried out by his network attracts the attention of Burton Jason (Craighall Sherry), the head of the Secret Service, who immediately assigns the task of unmasking Haghi to his top operative: an agent known only as No. 326 (Willy Fritsch).

Though 326's true identity is on a need-to-know basis throughout the Service, Haghi is all-too-familiar with the agent who will soon become his nemesis...and to prevent 326 from learning anything more about his set-up, Haghi assigns a beautiful Russian operative in Sonya Baranilkowa (Gerda Maurus) to deal with the agent. Sonya is juggling assignments; not only is she to distract 326 but she's currently seducing Colonel Jellusic (Fritz Rasp) into revealing information that will betray his country.

Haghi has not factored in the human element when it comes to Sonya's 326 assignment. The two agents fall in love, and when she declares to her boss she will not continue to act against No. 326, Haghi has her imprisoned in his clandestine headquarters.

As No. 326 tries to track down Sonya's whereabouts, he briefly crosses paths with Akira Masimoto (Lupu Pick) -- a Japanese security head in possession of a secret treaty which would be quite useful to Haghi. With his best female agent cooling her heels in solitary, Haghi assigns another duplicitous operative in Kitty (Lien Deyers) to pose as a homeless waif; Masimoto takes Kitty in and before you can say 'origami' she disappears, taking the treaty with her. Disgraced, Masimoto commits ritual suicide.

Soon after, another killing takes place when Haghi arranges to have Jellusic rubbed out to eliminate any loose ends and stop No. 326 from continuing on his trail. When the doggedly determined 326 is able to trace the origin of the bank notes paid to Jellusic in exchange for his treasonous activities, Haghi sets up an ingenious trap to accomplish this goal.

The early movie career of director Fritz Lang is marked by entries like The Spiders (1919), a serialized feature inspired by the Fantomas films helmed by French director Louis Feuillade. In a similar vein, Lang also held the reins on the daring crime thriller Dr. Mabuse, the Gambler (1922), a lively film focusing on the cunning and ruthless title character, the head of a vast criminal underworld empire. So why would Lang return to this thriller genre after demonstrating he was capable of such mature works as Destiny (1921), Die Nibelungen (1924) and Metropolis?

The answer lies in Metropolis itself; though a critical success, the science-fiction allegory did not perform well at the box office, so UFA, the German film studio who bankrolled most of Lang's productions, put the director on a diet in terms of the budget and Fritz found Spione (written by his then-wife Thea von Harbou, who was inspired by a real-life Soviet spy ring operating in London) would be the perfect fit for an economically-made feature, particularly one which was being produced as the first movie from Lang's own film company.

(In several scenes of Spies, you'll spot some of the poster artwork from Metropolis adorning walls in the background -- most notably in a scene where No. 326 tracks Sonya down at the House of Jellusic. Was this an in-joke or a reminder to Lang to keep an eye on the budget? Ultimately you must decide.)

To play the role of master spy Haghi, Fritz tapped his good friend Rudolf Klein-Hogge, who had appeared in many of Lang's movies but was best known for playing Dr. Mabuse in the 1922 film (and would reprise his role in 1933's The Testament of Dr. Mabuse, the second in the Mabuse trilogy) and the mad scientist Rotwang in Metropolis. Like Dr. Mabuse, Haghi in Spies is also a master of disguise; he resorts to a third masquerade in playing a circus clown that figures heavily in his eventual downfall. Klein-Hogge might jokingly be described as 'the German Lon Chaney'; like the famed 'Man of a Thousand Faces,' the actor is quite convincing in every costume he chooses.

The role of Sonya went to newcomer Gerda Maurus, who was a successful stage actress in Germany until the production in which she was appearing came to a close and she decided to sign a three-year contract with Lang to star in motion pictures. Lang and Maurus purportedly conducted an affair for a number of years beginning on the set of Spies (she later appeared in Fritz's Woman in the Moon), which seemed to be okay with Mrs. Lang (von Harbou); after all, Fritz stole Thea from Klein-Hogge, and he continued to work with the director after the fact. (Broadminded, those Germans.) Also making her silver screen debut was Lien Deyers, who used Spies as a starting point to become one of the country's most popular actresses in cinema.

In the role of No. 326 was Willy Fritsch, who had established himself in German cinema as a dapper, happy-go-lucky leading man until he received the chance to play against type in Spies. He, too, would appear in Lang's Woman in the Moon and later transitioned into talkies, playing opposite frequent leading lady Lillian Harvey. Fans of Fritsch no doubt got quite a surprise when the actor makes his first appearance in the film as a disheveled bum (part of his cover as a master spy) but he cleans up nicely as the movie progresses.

Spies was a huge hit in Germany and in the United Kingdom, which impressed UFA to the point where they relaxed the budget reins on Lang as he undertook Woman in the Moon. However, in the United States, Spies was a bit of a flop; shortened to nine reels (the restored version runs fifteen) it had the misfortune to play theaters in 1929, when talkies were the rage (no one was interested in seeing silent movies). The edited U.S. version meant American audiences were denied one of the movie's interesting subplots in which a woman identified as Lady Leslane (Hertha von Walther) is blackmailed by Haghi (he has photos of her in an opium den) to garner information about the Japanese treaty.

Considered a throwback to his earlier works, Spies actually presages the intricately plotted police procedural format of Fritz Lang's later M (1931) and Testament of Dr. Mabuse only without the pronounced political content. Its use of gadgetry (miniature cameras, invisible ink, etc.) foreshadows those films in the later James Bond franchise, and devices like the impressive steel staircase and the conclusion blending the theatrical and real life would later be borrowed by Alfred Hitchcock. Spies may be 'a small film with lots of action,' but I guarantee you won't find a more entertaining one.