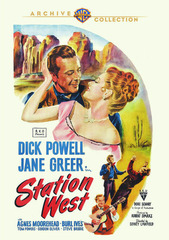 Where's That Been? - Station West

It's 1881, and a stagecoach pulling into Rock Pass sees a stranger (Dick Powell) exit the mode of transport, a man who answers to 'Haven.' We know he's a stranger because the desk clerk (Burl Ives) at the local hotel proclaims him as such; the clerk is a would-be balladeer in his spare time, and he warbles a little tune he's composed on the fly about the new man in town.

But unbeknownst to a majority of the townsfolk, the stranger is in actuality Lieutenant John Martin Haven -- a recently demoted Cavalry officer assigned the task of investigating a series of gold shipment robberies in the area, particularly since two enlisted men were murdered during one of the thefts. Captain George Iles (Tom Powers), the commander of a nearby post, is scarcely able to conceal his doubts as to whether Haven can crack the case, but the deaths of the two men only strengthen Haven's resolve. Haven goes undercover to infiltrate the gang responsible for stealing the gold, and report his findings to Mrs. Mary Caslon (Agnes Moorehead), the owner of a gold mine in the area. (Mrs. Caslon and Captain Iles also enjoy one another's company courtesy of a torrid love affair, though this won't have any bearing on Haven's work.)

Haven suspects cozying up to the owner of the local saloon -- identified as 'Charlie' -- is as good a place to start as any, and after successfully besting saloon bouncer Mick Marion (Guinn 'Big Boy' Williams) in a bareknuckle brawl, Charlie (Jane Greer) -- short for Charlene -- figures she can make room for our hero in her organization as manager of her stage line. In that position, Haven gets an up-close-and-personal gander at just how Charlie's operation works, and he has no end of suspects from which to choose.

Frederick Dilley Glidden (who later adopted the nom de plume Luke Short) escaped a life of unemployment by tapping into a talent for writing Western fiction, something he learned to do as a voracious reader of Western pulp magazines. In fact, he sold his first novel, The Feud at Single Shot, in 1935 and after a brief apprenticeship in the pulps moved on to bigger things with The Warning (published in Collier's in 1938) and his first important novel, Gunman's Chance, in 1941. Chance was later serialized in The Saturday Evening Post as Blood on the Moon, and was later adapted for the silver screen in 1948 as a feature film starring Robert Mitchum.

Short may not have realized it, but much of his writing would set the standard for what film critics now term 'Western noir,' which blended the popular movie genre of the Western with the style known as film noir, and at first glance, the two seem incompatible. Westerns typically feature rugged individualists in charge of their own destiny in wide, open spaces while noir protagonists are beset by fate steeped in paranoia and pessimism, finding the urban landscape claustrophobic and menaced by forces completely out of their control.

Short's 1943 novel Ramrod was brought to the big screen in 1947 in an adaptation previously discussed here; it's an underrated little oater featuring a proper femme fatale (Veronica Lake) and morally ambiguous heroes played by Joel McCrea and Don DeFore. We're still waiting for a Region 1 release of Blood on the Moon (it has been made available on PAL DVD as part of the Editions Montparnasse series), but since Station West (1948) was also only previously available in PAL DVD, perhaps Blood isn't far behind. Thankfully, Warner Archive brought West to MOD disc in January of this year where it was most warmly welcomed by fans.

Fresh off his revitalizing career triumph as private eye Philip Marlowe in Murder, My Sweet (1944), star Dick Powell effortlessly brings his new tough-guy persona to Haven, and scribes Frank Fenton and Winston Miller punch up their adaptation of Short's novel with some witty hard-boiled dialogue. To continue his masquerade as 'the stranger in town,' Lt. Haven gives Lieutenant Stellman (Steve Brodie), his initial contact, a lot of guff in Charlie's saloon. 'If I weren't in uniform,' threatens Stellman, 'I might teach you a few manners.' 'If you could teach me anything, you wouldn't be in a uniform,' retorts Haven.

My real favorite is a comment made by Haven to Charlie's henchmen at a lumber camp where he's posing as a driver hauling freight. Asked why he has the job, Haven cracks: 'Well, it's a system -- if I don't work, I don't eat...never found any way to beat it.' Miller and Fenton earned a Writers Guild of America nomination (Best Written American Western) for their efforts on Station West, and when Dick Powell became host of the TV Western anthology Zane Grey Theatre, he made certain to hire Short as contributer on several of the program's stories.

Station West was Jane Greer's follow-up to her incredible performance as Kathie Moffat in the quintessential noir picture Out of the Past (1947), and she's capable of matching co-star Powell step-for-step. There are quite a few familiar noir faces in West: Steve Brodie (Crossfire, Desperate), Agnes Moorehead (Dark Passage, Caged) Tom Powers (The Blue Dahlia), etc., but the most familiar is Raymond Burr, who plays against type as a weak-willed milquetoast who handles Greer's legal affairs. Also present is Regis Toomey, a pal to Powell in real life and as such he appears in a number of his movies like The Tall Target and Cry Danger (both 1951). (Toomey also benefited from his friend's eventual foray into small screen productions when he was cast as Detective Les Hart on Burke's Law, produced by Powell's company Four Star Productions.)

One other actor in Station West -- but for some odd reason didn't receive a nod in the credits (though he is mentioned on the movie's poster) -- is actor-singer Burl Ives, borrowed from 20th Century-Fox to play the comic relief of the lackadaisical poet-hotel clerk. It was Ives' third foray into films, and later that same year he enjoyed great success in the Walt Disney feature So Dear to My Heart. Ten years later, Ives played Rufus Hannassey in The Big Country (1958) -- the role that would nab him a Best Supporting Actor Oscar.