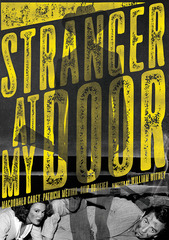 Where's That Been? - Stranger at My Door

'Republic. I like the sound of the word.' It's a line spoken by John Wayne (as Davy Crockett) in the 1960 epic The Alamo, but some classic film fans have also interpreted it as an in-joke for Republic Pictures, the Duke's motion picture home for many years where he was unquestionably the studio's biggest name. Several of Wayne's finest films open with the familiar Republic eagle logo: Sands of Iwo Jima (1949), Rio Grande (1950) and The Quiet Man (1952), for starters. The last two films were directed by John Ford, who also helmed The Sun Shines Bright (1953) at the studio run by Herbert J. Yates.

Republic was formed in 1935 with the consolidation of six smaller Poverty Row studios (including Monogram and Mascot), and for years their specialty was serials and B-Westerns. But Republic's product was a notch above what the competition had to offer: their western stars included Roy Rogers and Gene Autry, and from 1936 to 1945 they churned out many chapter plays the period known as 'The Golden Age of Serials,' that included such favorites as Drums of Fu Manchu (1940), Jungle Girl (1941) and The Adventures of Captain Marvel (1941). By the mid-1940s, the studio started to put more and more money into their films, and even put together prestige and cult favorites such as The Bullfighter and the Lady (1951) and Johnny Guitar (1954). (Orson Welles convinced Republic head Yates to make a version of Shakespeare's Macbeth in 1947.)

Stranger at My Door, a 1956 western directed by William Witney (with story and screenplay by Barry Shipman), is a representative example of Republic's commitment to 'upping its game' where it's A-product was concerned. Outlaw Clay Anderson (Skip Homeier) has just pulled off a successful bank robbery in the town of West Bridge, and upon fleeing into the hills with the other members of his crew, he hands them their 'cut,' telling each man to meet him in Kansas City at the end of the month. Clay fails to notice his horse has gone lame in the course of the hold-up, and he's unable to call for assistance from any of the other men, so he takes the lame horse and resigns himself to walking.

Anderson soon crosses paths with a young boy named Dodie (Stephen Wootton), who volunteers to nurse the horse back to health at his father's farm. After identifying himself as 'Tom Daniels,' Clay learns that Dodie's father is a minister named Hollis Jarret (Macdonald Carey), who in addition to farming is in the process of constructing a church on his property for a future congregation. Welcomed warmly by Hollis' wife Peg (Patricia Medina), Dodie's stepmother, Anderson gets a different reception when Jarret returns to the homestead. Which as should be expected: Hollis catches Clay trying to steal one of his horses and quickly deduces that 'Daniels' is in fact the outlaw that robbed the West Bridge bank.

Hollis isn't going to turn Clay in, however -- partly because he fears for the safety of his wife and son, and partly because he's convinced he can get Anderson to repent for his outlaw ways...even though Peg is highly skeptical on that score. (Clay has been making advances toward Mrs. Jarret, which might explain her distrust.) Despite being treated kindly by the Jarret family, Anderson remains immune to any hope of salvation; to him, salvation 'is a clean pistol and a good horse.' Those words will provide all the inspiration Hollis needs: he arranges to purchase a spirited thoroughbred from neighbor Ben Silas (Slim Pickens); a horse described by Clay as 'an outlaw, and nothing can be done about [him].' Jarret hopes that in taming the stallion, the 'stranger at his door' might also be shown the way.

No less an authority than Quentin Tarantino has praised William Witney as one of cinema's unsung directors (he referred to Witney as 'a lost master,' and used a clip from Bill's 1949 Roy Rogers western The Golden Stallion in a brief scene from Kill Bill, Vol. 2); Tarantino has even cited Stranger at My Door as one of Witney's superior films. But the Pulp Fiction director wasn't telling classic movie fans something they didn't already know; Witney's talent for fast-paced action had already been established in serials (co-directed with John English) like Zorro's Fighting Legion (1939) and King of the Royal Mounted (1940), and later with a series of first-rate B-Westerns starring Roy Rogers (Night Time in Nevada, Trail of Robin Hood).

Bill's no-nonsense direction later allowed him to flourish in television, helming episodes of such classic TV series' as Bonanza and The Virginian, and yet he still occasionally tackled a feature film assignment like the underrated Master of the World (1961). (Witney's autobiography is humorously titled In a Door, into a Fight, Out a Door, into a Chase: Moviemaking Remembered by the Guy at the Door.)

Witney's cinematic trademark was his splendid staging of fight sequences, in which he pioneered shooting donnybrooks as a series of meticulously choreographed camera shots (he was inspired by Busby Berkeley's musicals). Stranger at My Door features an amazing sequence in which Hollis attempts to tame 'Lucifer' (his new name for the horse he's bought), and is not only bucked off the spirited horse but watches helplessly as the equine tears up his farm and comes perilously close to harming Peg and Dodie. There are two other sequences in the film bearing Bill's indelible stamp; a shoot-out between Anderson and Sheriff John Tatum (Louis Jean Heydt) during a fierce windstorm at night, and an exciting chase climax involving Anderson, Tatum and Hollis (who finally manages to show 'Lucifer' who's boss).

MacDonald Carey gives one of his finest film performances as dedicated preacher Hollis Jarret. The actor toiled in scores of B-films (with an occasional 'A' assignment, like the role of the investigating detective in Shadow of a Doubt) and is perhaps best known for playing Dr. Tom Horton on the daytime drama Days of Our Lives. His calm, reassuring voice was featured in the program's opening ('Like sands through an hourglass...so are the days of our lives...') before and after his death in 1994; Carey was also the host of Heartbeat Theatre, a syndicated series produced by the Salvation Army that represented one of the few attempts to present radio drama long after the demise of its 'Golden Age.'

In the role of outlaw Clay Anderson is Skip Homeier, a child actor who made his auspicious debut as a Hitler youth in Tomorrow, the World! (1944) and later appeared in the likes of The Gunfighter (1950; as the callow youth who's a constant thorn in gunslinger Gregory Peck's side) and Cry Vengeance (1954). British-born Patricia Medina (The Foxes of Harrow, Abbott & Costello in the Foreign Legion) is quite good as Peg Jarret; she does an admirable job as a woman conflicted and torn upon Anderson's arrival to the point of questioning her marriage with husband Hollis. Character actors Heydt, Pickens and Malcolm Atterbury all lend fine support.

What would have been a routine assignment in the hands of any other director becomes positively astonishing under the tutelage of William Witney, who expertly blends Western action and thrills along with homespun homilies and religious symbolism in a tale that's perfect for all ages. After watching Stranger at My Door, I have to agree with the Duke: I do like the sound of the word 'Republic.'