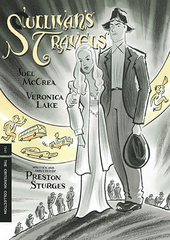 In the '40s, talented movie directors directed a ton of diverse and great movies. The beginning of the era was marked by the end of the screwball comedy, while the middle and the end of the era was the Golden Age of film noir. The film I'll review today, Sullivan's Travels, is, in my opinion, one of the most brilliant films of the decade. Directed by Preston Sturges in 1941 and starring Joel McCrea and Veronica Lake in the leading roles, this movie is what we call a 'social comedy.' I think it's a movie teens will not only appreciate for its comic side, an excellent humor indeed, but also for its clever message and moral.

Sullivan's Travels is one of those films taking place in the world of motion pictures. Just like Francois Truffaut's La Nuit Americaine (Day for Night), it's mainly about the making of a movie and movies about cinema are always of interest. John L. Sullivan (Joel McCrea), a Hollywood movie director, wants to direct a movie called O Brother Where Art Thou, a film about reality, about the poor social class, a movie to make people understand in what misery the poor lives and to denounce this injustice. However, as his boss helps him discover, he knows nothing about misery, so how can he direct such a film? So, Sullivan decides he will live as a poor man, believing it can help him understand what it is to suffer. With 10 cents in his pocket and wearing rags, he goes on an adventure to understand how it is to live as a 'forgotten man.' On his way, he'll meet a young girl (Veronica Lake) who will decide to help him in his project.

Sullivan's Travels gets better and better every time you watch it. Not because it isn't good on the first viewing, but because each time, you discover a little bit more about how intelligent it is, and how fascinating that it can be both hilarious and serious at the same time. Because yes, people tend to think comedies are only here to entertain those who don't feel like watching big dramas or those in the mood to watch a 'Friday night movie.' Well, Sullivan's Travels is not a 'Friday Night Movie.'

Why? Because it makes you think. You ought to have a reflection about the problems of this world after seeing it. It's a movie that makes you ask yourself questions about our society and how we can help to solve its problems. Films of the Italian Neo-Realism genre had the objective to present us the life of Italians after the war, and how they managed to live in a completely destroyed country. Sullivan's Travels is hard to compare with Italian neo-realism. It has professional actors, it's a comedy, etc., but we can compare it to that genre in its desire to denounce a social problem. In the same optic, we can also compare this film to Charlie Chaplin's work, because, like Sullivan's Travels, they are also social comedies. Modern Times would be one of the best examples.

Sullivan's Travels is also a movie that pays tribute to the glory of laughter and the funny people of this world. Indeed, at the beginning, this message appears on the screen:

'To the memory of those who made us laugh: the motley mountebanks, the clowns, the buffoons, in all times and in all nations, whose efforts have lightened our burden a little, this picture is affectionately dedicated.'

With this, we, as well as the main character, understand that, sometimes, only a good laugh can solve problems and help us forget our misfortune. I won't explain you how the film achieves this, because it's something we discover toward the end and I don't want to reveal spoilers.

The question now is 'why young people would enjoy this film?' They'll enjoy it because it is a comedy. I've said in my past articles teens enjoy comedy more than drama. Comedies are entertaining and, these days, teens prefer to be entertained and share a good laugh instead of watching heavy dramas. This film is filled with unforgettable and hilarious gags both visual and dialogue.

Sullivan's Travels is well directed and written by Preston Sturges. Each actor is well chosen and I'm glad that, if teens watch this, they will have the chance to discover these marvelous actors, not only Joel McCrea and Veronica Lake, but also Robert Warwick, William Demarest, Eric Blore and others. I've also read on IMDB that Preston Sturges wrote the film with Joel McCrea in mind. McCrea was the only actor ever considered for the role of Sullivan. Sturges was right to choose him!

Teens will be amazed by the film's potential, its strength and the fact it's a very 'modern' film. Indeed, even if this was directed in 1941, it talks about a problem still part of our society and that, unfortunately, will always be: poverty. It still joins our interests and what we know about life.

I'm hoping I convinced teens and young adults to watch Sullivan's Travels, and that they will enjoy it as much as I do. Here's hoping they'll understand how bright a movie can be. Also, let's not forget this film is part of The Criterion Collection so, of course, we can't go wrong with that!