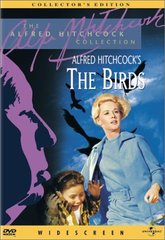 Despite a lukewarm reception upon premiere in 1963, The Birds is now considered one of Alfred Hitchcock's masterpieces. The follow-up to Psycho (1960), a film that would be difficult to top for anyone, Hitchcock didn't release a movie for three years after his visit to the Bates Motel, making it the longest break between pictures in his career. But The Birds was certainly worth the wait.

Based on Daphne Du Maurier's novella, 'The Birds' was first published in 1952 in Good Housekeeping. It was the third Du Maurier story Hitchcock had adapted after Jamaica Inn (1939) and Rebecca (1940). When he began thinking of his next project a real life incident of seabirds attacking a town in California in 1961 attracted his interest. Hitchcock asked screenwriter Evan Hunter to help him write the script, though, as usual, Hitchcock eventually took control of the screenplay.

Hitchcock cast previously unknown actress Tippi Hedren, whom the director saw in a commercial and chose over veterans like Sandra Dee, Yvette Mimieux, Pamela Tiffin, and Carol Lynley. Opposite Hedren is Rod Taylor, with Jessica Tandy and Suzanne Pleshette rounding out the cast. The film was something of a family affair for Tandy; her husband, actor Hume Cronyn, reportedly helped Hitchcock refine the script.

The Birds begins in San Francisco, quickly moving to the small seaside town of Bodega Bay when Melanie (Hedren) brings a pair of lovebirds to her crush, Mitch (Taylor). Almost immediately the wild birds in the area begin acting strangely. Seagulls swoop down from the skies to attack Melanie as she crosses the bay, and crows and songbirds join the gulls in strange, aggressive behavior. The birds swarm the town causing death, mayhem, and terror. No one understands why the birds are acting like this; in fact, although Hunter's efforts at the screenplay tried to explain the sudden attacks, Hitchcock decided to leave it vague. It certainly gives the film a spookier quality to leave the 'why' unanswered.

Adding to the atmosphere of unpredictable and inexplicable horror is the score. The soundtrack is haunting and unique, and helps give The Birds an uneasy, terrifying tension. Hitchcock made the unusual choice to forego music in favor of bird sounds and uncanny notes from the electronic instrument the Trautonium.

The movie is a triumph of special effects, and its only Oscar nomination came in that category. Hitchcock hired special effects wizard Ub Iwerks to create the difficult shots integrating live birds with animated and prop animals. Iwerks used a system he helped invent called the sodium vapor process or 'yellow screen,' which enabled more precise and visually perfect matte shots than the more common 'blue screen' which would have caused fringing around the birds' wings. The yellow screen process wasn't easy, but Iwerks' results are amazing. The birds seem all too real, and their attacks are visceral and terrifying.

Hitchcock didn't want to rely solely on special effects, so real birds were frequently used during filming, much to the actors' dismay. Hitchcock famously shot the horrific attic scene using mostly live birds that the crew literally threw at a very brave Tippi Hedren. It took one week to film the brief scene, and Hedren remembered that 'By Thursday, I was noticeably nervous. By Friday they had me down on the floor with the birds tied loosely to me with elastic bands which were attached through the peck-hole in my dress. Well, one of the birds clawed my eye and that did it. I just sat and cried.' Hitchcock's cruel methods got the results he wanted -- the scene is intense and frightening, and serves as a fitting finale before the quiet, ambiguous final shots.

Although audiences liked the film, critics were almost uniformly negative. The New Yorker called it a 'sorry failure' and Newsweek wrote the premise was 'inexpertly handled,' which seems odd. But its critical reputation has been re-evaluated since then. In 2001, the American Film Institute named The Birds the 7th Greatest Thriller in American cinema. It was Hitchcock's third film in the Top 10 after Psycho (#1), and North by Northwest (#4). He was the master of suspense after all!

The Birds has been analyzed and dissected for decades, with as many readings of the film as there are critics. Some see the movie as an allegory of female sexuality, world politics (it was the height of the Cold War, and the Cuban Missile Crisis happened towards the end of filming), a parable of Nature vs. Civilization, an updated Western with the birds as the demonized Native Americans, or a biographical ode to Hitchcock's experience of WWII with the birds as German bombers. Take your pick. The film works great as a simple terrifying tale of bird attacks, too. Regardless of the subtext, after watching The Birds, you will never look at crows sitting on telephone wires the same way again!