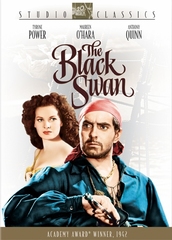 The Black Swan (1942) is a classic pirate film featuring scenes of pillage, barrels of grog, a grizzled but loyal first mate, and duels with ships and swords; tropical locations captured in Technicolor delight the eye, and a tempestuous relationship between a handsome pirate and the Governor's beautiful daughter checks the romance box. If The Black Swan sounds like a collection of pirate movie cliches, it's because it is -- but they only became cliches because of movies like this!

The Black Swan was based on Rafael Sabatini's 1932 novel of the same name, which in turn was inspired by the real life adventures of Sir Henry Morgan, a 17th-century pirate-turned-governor. (Sabatini's 1922 book Captain Blood was also loosely based on Morgan, and became a hit film starring Errol Flynn in 1935.) Morgan remains one of the best known pirates in popular culture, and he still turns up in pirate movies, books, and the label of an eponymous brand of rum!

This film follows Morgan and his right hand man Jamie, played by Tyrone Power, one of the most dashing men to ever appear on screen. The actor had recently caused a sensation in The Mark of Zorro (1940), his first big swashbuckling picture, so it's no surprise he was cast in this movie. The female lead (and pretty much the only woman with a speaking role), went to Maureen O'Hara, who was still relatively new to Hollywood. RKO offered the Irish actress a contract after she appeared in Alfred Hitchcock's Jamaica Inn (1939). She stayed busy once she arrived in Hollywood; The Black Swan was her eighth film in three years and helped her earn the title 'Queen of Technicolor.'

O'Hara wasn't thrilled with that name and longed for more challenging roles, but she enjoyed making The Black Swan. She wrote in her autobiography, 'Tis Herself that the film 'had everything you could want in a lavish pirate picture: a magnificent ship with thundering cannons; a dashing hero battling menacing villains...sword fights, fabulous costumes; and a damsel in distress draped in oodles of jewelry...The Black Swan proved to be a super-smashing box-office success...' She also remembered that 'Working with Ty Power was exciting. In those days, he was the biggest romantic swashbuckler in the world...But what I loved most about working with Ty Power was his wicked sense of humor. He was an absolute devil and quickly figured out that I was a naive Irish lass. I was the perfect stooge.'

In The Black Swan, Power and O'Hara traverse the seas fighting a rival pirate (George Sanders is nearly unrecognizable in a large red beard) and their feelings for each other. But despite the frequent kidnapping and days spent on pirate ships, O'Hara remains beautifully dressed and coiffed. The pirates are unbelievably clean, too, which forms a comic contrast to the purposefully gruesome pirates in films like Pirates of the Caribbean.

The film was in production in April through June 1942, just a few months after Pearl Harbor and America's entry into WWII. Although the war doesn't intrude onscreen, it was present behind the scenes. The studio tried to conserve materials to help the war effort, so the actors and crew used as little film as possible with about thirty of the scenes shot in just one take. And Fox marketed The Black Swan as Tyrone Power's last film before he joined the military, but actually he made one more movie, a war film called Crash Dive (1943), before he enlisted in the Marines. He was past the age for combat missions, so he flew cargo planes in the Pacific. He was awarded two bronze stars and the WWII Victory Medal, among other awards. He remained in the reserves after the war ended and was eventually promoted to major.

The Black Swan premiered in December 1942 to mostly good reviews. Photoplay called the movie 'a gorgeous riot' and a 'rowdy, gusty, colorful [story] of romance.' The review added that O'Hara 'is wondrously beautiful' and 'Power comes forth with one of his best performances.' The New York Times critic wrote that the film 'is performed by actors as if to the hokum born. Mr. Power is a very vision of manly loveliness, and he growls just like a big bad pirate;...George Sanders' Billy Leech is as naughty and quarrelsome a man as one would care not to meet on a moonless night;...and Maureen O'Hara is brunette and beautiful -- which is all the part requires.'

Cinematographer Leon Shamroy earned praise, too. His stunning lighting and Technicolor magic was recognized in reviews and trade publications; for example, Film Daily wrote, 'The Technicolor in The Black Swan has an amazing quality about it -- a quality that makes each frame take on the appearance of a painting done in oil -- with rich deep hues that are a treat to behold. Yes, the visual appeal of this film is tremendous.'

American Cinematographer was also impressed and included the film in its 'Photography of the Month' feature. The critic wrote that Shamroy 'paints his picture in broad, vivid strokes, as becomes a story in which colorful settings and colorful costumes and action combine so vividly. Yet on analysis, you'll notice that much of the color is actually subdued, toned down either in the actual set or costume, or toned down by Shamroy's careful use of strong effect-lightings, so that while you get an overall impression of strong color, you get it actually without being chromatically surfeited.'

The magazine also noted Shamroy's 'striking portrait-lightings' of Power and O'Hara, writing that it was those shots that made the strongest impression. The Academy recognized Shamroy's work with the Oscar for Best Color Cinematography, his first of four such wins out of eighteen nominations. The Black Swan also received nominations for Best Music and Best Special Effects, but didn't take home those statuettes.

If you're looking for a visually spectacular film with plenty of romance and swashbuckling adventure, look no further than The Black Swan. It's a stunning treat with top notch stars and all the classic pirate tropes we've come to know and love.