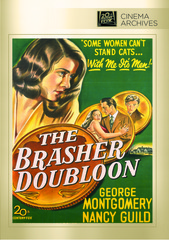 Where's That Been? - The Brasher Doubloon

In The Brasher Doubloon (1947), private investigator Philip Marlowe (George Montgomery) ventures out of his familiar L.A. surroundings to Pasadena, where he's been summoned to the stately manor of dowager Elizabeth Murdock (Lucille Bates). Mrs. Murdock wants to hire Marlowe to locate the titular coin; a rarity (there are only two known pieces of the currency, the other owned by the Smithsonian) worth upwards to 0,000...and possibly more. Marlowe's not particularly interested in taking the case, despite a 00 retainer; he doesn't think Mrs. M is playing straight with him (she believes she knows who the thief is but is reticent to give out additional information) and a run-in with her spoiled son Leslie (Conrad Janis) has done nothing to convince him further. What does change his mind, however, is his introduction to her personal secretary, Merle Davis (Nancy Guild), who's a little on the neurotic side but that's part of her charm.

Marlowe thinks the case will involve simply recovering the coin...but as his investigation unfolds, a labyrinthine caper is laid bare involving the dysfunctional Murdock clan and the deaths of three men. The object of his affection, Ms. Davis, also appears to be up to her neck in the trouble concerning the numismatic antiquity as well.

Raymond Chandler's sleuthing creation Philip Marlowe is the main character in several classic noir mysteries, including Murder, My Sweet (1944; played by Dick Powell) and The Big Sleep (1946; Humphrey Bogart). In fact, it would be one of two Marlowe vehicles released that year -- the other being Lady in the Lake (1947), with Robert Montgomery as the shamus. Other actors to interpret one of the literary world's best-known detectives include James Garner (Marlowe), Elliott Gould (The Long Goodbye) and Robert Mitchum (both Farewell, My Lovely and a remake of The Big Sleep). Even before Marlowe's first movie adventure was released, two of Chandler's novels provided the grist for films spotlighting other cinematic sleuths: George Sanders as The Falcon in The Falcon Takes Over (1942; the first incarnation of Farewell, My Lovely [Murder, My Sweet]) and Lloyd Nolan as Michael Shayne in Time to Kill (1942; The High Window).

The Brasher Doubloon is a remake of Time to Kill -- in the United Kingdom, the movie went by the same title as the source material, Chandler's novel The High Window (which refers to the method involved in the late Mr. Murdock's death). 20th Century-Fox considered several actors for the role of Marlowe: Fred MacMurray, Victor Mature, Dana Andrews and John Payne (the last two might have been pretty good choices). They decided to cast George Montgomery as the gumshoe, and that's one of several reasons why Doubloon never really gels as a good film.

Everyone has their favorite Philip Marlowe interpretation: author Chandler was on record as liking Bogart in The Big Sleep. My personal preference is Dick Powell, whose ability to infuse his hard-boiled tough guy with an appealing vulnerability (a holdover from Powell's chorus boy days at Warner Brothers) made him more like the Marlowe in the author's novels: sure, Philip could be a cynic...but he was also -- in the words of Chandler -- a 'shop-soiled Sir Galahad,' a modern-day knight in shining armor coming to the aid of damsels in distress. (They could have named Bogie's Marlowe 'Sam Spade' and I don't think anyone would have noticed.)

Casting George Montgomery as Marlowe is a major misstep in Doubloon. He's got the tough-guy heroics down okay (he began his movie career as a stuntman), but there's no further depth to his interpretation of the part. Montgomery was one of just many actors who got by on his matinee idol looks and little else; despite his limited range, he appeared in such Fox hits as Star Dust (1940), Orchestra Wives (1942), Ten Gentlemen from West Point (1942), Roxie Hart (1942), Coney Island (1943) and Three Little Girls in Blue (1946). George once boasted that he turned down the leads in both the Gunsmoke and Wagon Train series; instead, he settled for a short-lived TV oater in Cimarron City, telecast aired on NBC from 1958-59. His other notable accomplishment as a Hollywood celebrity was his twenty-year marriage to singer Dinah Shore from 1943 to 1963.

Montgomery's leading lady, Nancy Guild, is another liability in Doubloon: she gives a rather uneven performance as Merle, a woman whose skeletons in the closet are the sole responsibility of the Family Murdock. Instead, acting honors in the film go to Lucille Bates (so memorable as Mrs. Van Hopper in Alfred Hitchcock's Rebecca) as the sinister Madame Murdock, and Fritz Kortner as the newsreel photographer Rudolph Vannier, who functions as the 'Joel Cairo' in the story. Modern day audiences might get a chuckle seeing Conrad Janis (with hair, even!) as mama's boy Leslie after later achieving small screen fame as dad to Pam Dawber on the 1978-82 sitcom Mork & Mindy (not to mention his distinguished jazz career). As for myself, character fave Roy Roberts (as the police lieutenant on the case) is always a pleasure, as is radio's Marvin Miller as a hood who's putting the squeeze on Leslie (Miller later, as Michael Anthony, doled out checks on behalf of mythical money man 'John Beresford Tipton' on TV's The Millionaire).

John Brahm's uninspired direction on The Brasher Doubloon is quite disappointing; it's hard to believe that the man who did such fine work on The Lodger (1944) and Hangover Square (1945) was sitting in the director's chair on this one. In Brahm's defense, the script by Dorothy Bennett and Leonard Praskins fails to capture the complexity of Chandler's source material...the only bright spot (which is ironic, since its low-key lighting and dark backgrounds are textbook examples of great noir) is Lloyd Ahern's splendid cinematography. I don't want to discourage anyone from seeing Doubloon: there are some worthwhile elements here and there, and if you're familiar with the other films based on Chandler's works it helps to see it for completist's sake. But if this is to be your introduction to Philip Marlowe, make it so...you have no other direction to go but up.