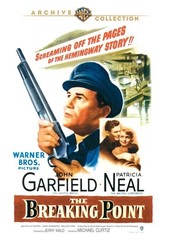 Where's That Been? - The Breaking Point

Skipper Harry Morgan runs a struggling fishing charter that he hopes will get back on its feet after he agrees to take a wealthy customer out to do some deep sea angling. But when his patron takes a powder without paying what he owes, Morgan is forced to take on an assignment ferrying some passengers who would be of great interest to the authorities. Harry's clandestine smuggling activities are further complicated when he meets a beautiful blonde who has romantic designs on him.

Okay...I know what you're thinking: what the heck is To Have and Have Not (1944) doing in this column? To Have and Have Not is an acknowledged motion picture classic; it's the movie that highlighted the undeniable onscreen chemistry between tough guy Humphrey Bogart and newcomer Lauren Bacall...which led to the couple becoming Mr. and Mrs. Bogie, one of Hollywood's sweetest love stories. So go back and look at the title of this column again - the plot I described in the first paragraph is also the narrative of To Have's 1950 remake, The Breaking Point.

Howard Hawks, director of To Have, thought Ernest Hemingway's same-named source material to be the author's worst book...and wasn't hesitant about telling Hemingway so with his trademark bluntness. Hawks had bought the rights to the novel from Howard Hughes, and with Hemingway and Jules Furthman (and a later assist from William Faulkner, who was 'out of print and broke' at the time), fashioned a script that took the names of the characters (and a few of their characteristics) along with only the barest bones of Hemingway's book. To Have and Have Not is really just a reworking of Casablanca (1942); the scripters changed the location from the Cuba of the novel to Martinique, setting the film's action against the background of a French colony overseen by the Vichy regime. Additional Casablanca-like characters - a sympathetic piano player (Hoagy Carmichael), a Renault-like official (Dan Seymour) - were also thrown into the mix, plus the revamped plot of the 1944 To Have also focuses on the Bogey character coming to the aid of husband-and-wife resistance fighters.

At the risk of stoking the ire of classic movie fans, thus encouraging them to storm the ClassicFlix website with torches and pitchforks, I'm not a huge fan of To Have and Have Not. While I like the byplay between Bogie and Baby, the film itself sputters like an outboard motor after its first third and its wrap-up is one of the most unsatisfying in movie history. Screenwriter Ranald MacDougall might have felt the same way, since he was the man responsible for convincing producer Jerry Wald to take another crack at the material six years later. Retitled The Breaking Point, it was the first film in what was to be a two-picture Warner Bros. deal with actor John Garfield - who had been one of the studio's biggest stars beginning with Four Daughters (1938) until he said 'sayonara' to J.L. and his brothers in 1946. Garfield's foray into independent filmmaking, while gifting us with classics such as Body and Soul (1947) and Force of Evil (1948), was not the huge success on which he was banking and so he was lured back into the Warners fold.

In my opinion, John Garfield was not only one of Hollywood's greatest screen actors but one of its most charismatic as well. As such, I think The Breaking Point may very well feature his finest performance. I'll recap here a bit: as Harry Morgan, Garfield plays a man who's at the emotional state announced in the film's title. Morgan has bills he can't pay, and the repo man is threatening to confiscate his boat, The Sea Queen, because he's in arrears. His devoted wife Lucy (Phyllis Thaxter) assures him everything will be fine (though she secretly wishes he'd find another line of work; she suggests to him a number of times that her father, a lettuce farmer, wants him in the business) but the difficulties in providing for his family is starting to eat away at Harry's soul.

With his partner Wesley Park (Juano Hernandez), Harry takes a man named Hannagan (Ralph Dumke) down to Mexico to see the sights and get in some fishing; Hannagan is accompanied by a charming blonde named Leona Charles (Patricia Neal), who flirts with the married Morgan during the excursion. Hannagan loses badly betting on cockfights in a Mexican bar, and hops a plane back to the States the next morning without settling up with Harry, leaving him stranded with Wesley and Leona. Against his better nature (and because he needs money for the clearance fees to return home), he agrees to take on a job arranged by a skeevy lawyer named F.R. Duncan (Wallace Ford) to smuggle undocumented Chinese passengers back to the U.S. on the behalf of a mysterious man named Sing (Victor Sen Yung). The mission goes sour when Sing reneges on the amount of money he's promised Harry; Sing is killed in a bit of gunplay with Morgan and the passengers are sent back to the point of embarkation.

The authorities soon get wind of Harry's attempts to liberate Sing's friends and commandeer his vessel while an investigation is underway. With his livelihood in dry dock, Morgan is placed further in a financial pinch; Phillips (Alex Gerry), the man to whom Harry has been making payments, even warns him that if he can't come up with some money in two weeks he can kiss the Sea Queen goodbye. So Morgan is forced once again to make a deal with the Devil (in the form of Duncan); after Duncan arranges for the authorities to release Harry's boat, he offers Morgan's services to a man named Danny (Guy Thomajan) who's planning on robbing a racetrack with his confederates and using Harry's boat as a getaway car.

In many of his screen portrayals, John Garfield was the perfect embodiment of the working class Everyman...with the added appeal of portraying individuals with both sensitivity and intelligence despite their proletarian origins. The actor displays those qualities here as Harry Morgan; a man who is urged by his wife to make a change in his vocation (he's certainly bright and capable enough to succeed in another line of work) despite loving what he does. A tough but tender soul, Morgan can hold his own in any threatening conflict, and yet he remains a devoted family man who'd make any number of sacrifices for his wife and kids.

Those of you familiar with the off-screen events in Garfield's career are aware that he was hounded by the House Un-American Activities Committee towards the end of his life - he was suspected of subversive activities by that DC crowd, who overlooked the fact that few Hollywood actors had done more on behalf of the war effort (for starters, he founded the Hollywood Canteen along with fellow Warners employee Bette Davis). Perhaps Julie's decision to make The Breaking Point was one of the reasons why they scrutinized him so closely; Hemingway's original To Have and Have Not had distinctive Marxist overtones, having been written during the Spanish Civil War (Hemingway fought alongside the Loyalists). There's a subversive underlying to Breaking Point in that its message is a man is helpless against a system rigged against him and that he must entertain ideas of lawlessness in order to keep afloat.


In addition, The Breaking Point contains many elements associated with what classic movie fans and critics ascribe as the film noir style; there are no rain-swept streets or dark alleys or femme fatales present...but the pervading pessimism of the movie, along with the idea of an individual at the mercy of Fate simply because they made a wrong decision in the heat of the moment gives Breaking Point solid noir credibility. The fatalistic ending of Breaking Point - which I've kept under wraps for the benefit of those who've not had the pleasure of seeing the film - is a complete 180 from the false one that rings down the curtain on To Have and Have Not; the final image is one of the most heartbreaking in all of noir cinema. Critic-historian Alan K. Rode considers The Breaking Point to be 'the best adaptation of any of Hemingway's works'; Hemingway reportedly told actress Patricia Neal that the movie was his personal favorite of all the film adaptations of his writings.

The acting turns of the supporting cast in The Breaking Point are every bit the equal of its star, John Garfield. We associate Patricia Neal with many 'earth mother' roles (like her Academy Award-winning work in 1963's Hud) but back when she was beginning her movie career as a Warner Bros. starlet she was quite the hottie; her Leona Charles may be in the perfume-selling business ('I like to smell nice,' she tells Garfield's Harry) but viewers are left with the impression that she supplements that income by 'depending on the kindness of strangers,' if you get my meaning. Phyllis Thaxter didn't enjoy quite as a distinguished career as the second-billed Neal but her Lucy Morgan allows her to demonstrate how a fine actress can work wonders with what could have been a thankless role. There's a vulnerability to Thaxter's Lucy (watch her subtle disappointment to Harry's reaction to her bleaching her tresses in an attempt to imitate Leona's sophisticated hairstyle) and yet her scene with Garfield before the final curtain exudes both an achingly tender and resolute fighting spirit to hold onto her husband and forgive him for his transgressions.

I've long been a fan of character actor Juano Hernandez, who's perhaps best known for his high-profile work in 1949's Intruder in the Dust, based on the William Faulkner novel. Here, Hernandez tackles the 'sidekick' role by playing it perfectly straight (unlike Walter Brennan's comic relief in To Have and Have Not); I put sidekick in quotes because even though Morgan tries at every turn to make certain he's out of harm's way, Juano's Wesley Park is Harry's friend and partner...and equal - no demeaning stereotypes here. Props also go out to Wallace Ford as the despicable Duncan, who's essentially a pesky mosquito Harry can't swat; Ford was settling into solid character parts at this juncture of his career and made quite an impression in such classic noirs as Dead Reckoning (1947), T-Men (1947) and The Set-Up (1949).

Director Michael Curtiz, who came to embody the Warner Brothers brand with such films as The Adventures of Robin Hood (1938) and Yankee Doodle Dandy (1942), had a few more pictures up his sleeve after The Breaking Point...but to my mind, I don't think any of them comes close to matching what he accomplished here, his last great movie masterpiece. Sadly, despite John Garfield's success with another Hemingway adaptation in the previously-released Under My Skin (1950 - based on the short story My Old Man), the actor would not get to make that second feature in his deal with the studio; he passed away less than a year after his swan song, He Ran All the Way (1951), was released to theaters. He's nevertheless left us a rich cinematic legacy, and The Breaking Point should be at the top of any 'must-see Julie' list.