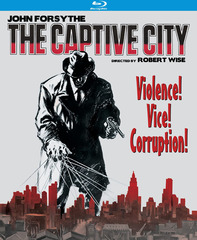 Where's That Been? - The Captive City

It sounds a little facetious to say it, but the most popular personality on television in the first half of 1951 might very well have been Tennessee Senator Estes Kefauver. His live Senate committee hearings on organized crime were watched by an estimated 30 million viewers educated on the intricacies of how gangsters had thoroughly permeated life in these United States from such experts as Mickey Cohen, Meyer Lansky, and Jake 'Greasy Thumb' Guzik.

Perhaps the most memorable witness to testify at the Kefauver hearings was legendary crime boss Frank Costello -- who insisted his face not be shown on camera; that the unblinking eye focus on his hands instead. (In retrospect: not a particularly smart move on Frankie's part, viewers could tell Costello was sweating his interrogation from the constant nervous fumbling of his mobster fingers.)

The Kefauver hearings made for great television, and in the entertainment industry, what's sauce for the goose is sauce for the gangster. (Apologies for the pun.) Hollywood began to follow suit with a series of 'expose' movies (a subset of film noir often referred to as 'docu-noir').

There was Republic's Hoodlum Empire (1952), in which future TV Lawman John Russell plays a former mobster asked to fink on his former associates (Forrest Tucker, Luther Adler). Paramount also got into the game with The Turning Point (1952), based on Horace McCoy's novel Storm in the City, in which D.A. William Holden and newspaperman Edmond O'Brien join forces to take down a crime syndicate. (Sadly, the status of Turning Point on DVD is still in limbo, but if you can track it down it's well worth your time.)

But it was The Captive City (1952) who won the race to be first at the box office in a tale based on the real-life experiences of Time magazine reporter Alvin M. Josephy, Jr., who co-wrote City's script with Karl Kamb. The fictional counterpart of Josephy is Jim T. Austin (John Forsythe), a small town newspaper editor who, with his wife Marge (Joan Camden), is fleeing from unknown individuals shortly after the opening credits have rolled. They attempt to seek shelter in a police station and ask for help in getting an escort to the state capitol, but the police captain isn't available, so Jim decides to dictate the details of just how he got there into a reel-to-reel recorder.

Jim Austin manages a small newspaper with his partner Don Carey (Harold J. Kennedy); Don handles the business end (advertising and the like) while Jim oversees the editorial content of the paper. One day, Austin is approached by a private investigator named Clyde Nelson (Hal K. Dawson), and while we're accustomed to TV private shamuses solving murders and the like, Nelson is a gumshoe who does what real gumshoes do: gather evidence in messy divorce cases.

It's while handling the alimony side of Margaret Sirak's (Marjorie Crossland) split from her husband Murray (Victor Sutherland) -- a prominent insurance agent -- that Nelson stumbles onto knowledge of a formidable gambling operation operated by Sirak, one apparently involving many of the business leaders in town including Gillette (Ray Teal), the chief of police. In retaliation for what he knows, Gillette begins a campaign of intimidation against Clyde, ranging from issuing him parking tickets to wiretapping to revoking his P.I. license.

Austin stops by Gillette's office for a chat concerning Nelson's allegations, and the chief tells him to pay Clyde no heed: he's a few sandwiches shy of a picnic, and that's why they took his license. Even when Nelson calls him in a panic (while Jim and Marge attend a country club dance) Austin continues to take his story with a grain of salt...but then he encounters Nelson's wife (Geraldine Hall) at the police station after Clyde is killed in a hit-and-run accident.

Mrs. Nelson, blaming Jim for her husband's death, tells Austin a car with Florida license plates had been following both her and Clyde around for days before Nelson's demise. Jim soon starts to get frustrated at what he feels is inaction on law enforcement's part to find Nelson's killer, and he begins to write a series of editorials emphasizing this.

A rift starts developing between Austin and Gillette, to the point where the paper's employees are finding parking tickets on their cars where before they enjoyed the perks as members of the press. Jim takes it upon himself to investigate several names on a list he digs up in Nelson's office, and learns the individuals listed are all supplementing their business income with a little bookie action on the side.

Told by a number of town officials to back off, things start getting serious when Jim recognizes a man who's rented some warehouse space from a local -- he's none other than mobster Dominick Fabretti (Victor Romito), and Austin soon becomes a target for the same people who arranged for Nelson to sleep with the fishes.

The Captive City is often erroneously identified as John Forsythe's feature film debut, and anyone who's seen Northern Pursuit or Destination Tokyo (both 1943) can soon dissuade you from that notion. It was, however, his first starring role in a film, and though we generally think of the actor as a small screen fixture (with series like Bachelor Father, Charlie's Angels, and Dynasty on his c.v.) Forsythe did some impressive work on the big screen as well, particularly as the genial leading man of Alfred Hitchcock's jet-black comedy The Trouble with Harry (1955). (Some of Forsythe's better screen turns are a little out of ClassicFlix's jurisdiction, notably In Cold Blood [1967] and ...And Justice for All [1979].)

Forsythe does a superb job as a man who dares to take on powerful forces because of an unshakable decency at his moral core (unlike partner Harold J. Kennedy, who continues to ignore the signs that the town has become corrupt so as not to rock the boat where their paper is concerned), and he's not the only familiar TV face in Captive: future Route 66 and Adam-12 star Martin Milner plays the paper's eager-beaver photographer, who's worked over by Fabretti's goons after he snaps a nice candid of their boss.

The viewer will probably guess (especially if they've seen Ace in the Hole, where he played the corrupt sheriff) that Ray Teal isn't on the up-and-up despite his many years as Sheriff Roy Coffee on Bonanza. The man overseeing the hinky shenanigans in the warehouse is character veteran Paul Newlan, Lee Marvin's superior on M Squad, and the police sergeant in the opening scenes may be difficult to recognize at first (particularly since he's clean-shaven) but it's Paul Brinegar -- Wishbone the cook on Rawhide.

Even the man mentioned in the first paragraph of this review, Senator Kefauver, makes an appearance in The Captive City (in an epilogue at the film's end). The director of Captive, Robert Wise, took a print of the finished film to Washington to let Kefauver have a look and Estes was so impressed he agreed to be in the movie (he's also quoted in a prologue at the beginning).

Robert Wise mined box office gold from such mega-musicals as West Side Story (1961) and The Sound of Music (1965), but people often forget Wise knew his way around a noir. Bob helmed such noir essentials as Born to Kill (1947) and Odds Against Tomorrow (1959), not to mention the best boxing movie in the history of cinema, The Set-Up (1949).

Wise brings the same professionalism from his other noirs to Captive City; many of his shots are done in close-up, emphasizing the claustrophobic feel of the picture, and he's quite good (with the help of cinematographer Lee Garmes) at conveying a sense of fear and distrust pervading Forsythe's small-town burg (there are more than a few overtones of the unsettling paranoia prevalent in the country at that time).

Filmed on location in Reno, Nevada in a speedy three weeks, Captive City makes no attempt to hide its B-picture origins but is undeniably a taut, suspenseful film worthy of multiple viewings. Released as a MOD disc by MGM's Limited Edition Collection in 2011, The Captive City makes its Blu-ray debut on January 5, 2016.