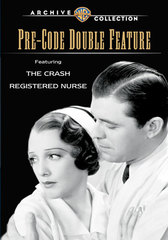 Dark Cinema: Registered Nurse - A Cure for What Ails You

Registered Nurse may not crop up on many lists of must-see Pre-Codes, but for my money, it's 63 minutes of worth-your-time-cinema.

Released in April 1934, Registered Nurse stars Bebe Daniels as Sylvia Benton, a wealthy Connecticut socialite whose would-be carefree life is marred by the fact her husband, Jim (Gordon Westcott), is a hopeless alcoholic (not to mention a bit of a jerk). Sylvia is so miserable, in fact, she's decided to leave Jim and return to her profession of nursing. Problem is, she shares this information with her spouse while he's driving the couple home, after having consumed more than one drink too many at a swanky party. Not surprisingly, their car ends up in a ditch.

The next thing we know, Sylvia is living in New York and signing on at a hospital there. We don't know what happened to Jim, but we do know Sylvia tells the hospital matron (the venerable Beulah Bondi) that she's not married. Via a montage of speeding ambulances and rolling gurneys two years go by, and Sylvia is now a highly respected nurse at City Hospital. And as we soon see, she's no pushover. When fight promoter Frankie Silvestri (Sidney Toler of Charlie Chan fame) is brought into the emergency room with a broken leg and a funky attitude, Sylvia is sent for. Silvestri refuses to listen to her instructions and gives her a shove -- and Sylvia promptly counters with a slap to the man's face. 'Say! Dames don't slap me where I come from!' Silvestri informs her. Sylvia calmly rejoins, 'If you don't behave yourself, I'll slap you so hard you'll forget where you came from.'

Speaking of pre-Code, this film seems to have exchanged the usual gratuitous lingerie shots with lots of scenes of nurses smoking cigarettes. (In fact, they're frequently shown striking their matches on a 'No Smoking' sign.) In one scene, Nurse Sylvia even gives a cigarette to an insistent patient, brothel madam Sadie Harris (Irene Franklin), who, incidentally, was the person responsible for breaking Silvestri's leg. He, in turn, left her with a black eye and a few broken ribs. (And don't think their violent exchange leads to any somber moments in the film. Instead, it's played for laughs -- the two ride in the ambulance together, bickering all the way, and after they arrive, an orderly jokes that Sadie 'looks like a hamburger.')

We spend even more time with the fight promoter when two of his wrestlers visit him in the hospital. After exchanging some heated words, the two fighters get into a no-holds-barred brawl in the hospital room. They make such a commotion it attracts stunned nurses and doctors from throughout the building, and the scuffle eventually earns both men their own beds in the hospital. (Incidentally, one of the wrestlers is played by Tor Johnson who, two decades later, would achieve a measure of fame in a couple of Ed Wood pictures, Bride of the Monster in 1955 and the notoriously bad Plan 9 From Outer Space in 1957.)

But back to heart of the movie: the hospital staff.

In addition to being City Hospital's favorite nurse, Sylvia is also the object of the affection for two of the physicians there: notorious womanizer Dr. Greg Connolly and Dr. Hedwig (John Halliday), who's a self-described woman-hater until he falls for Nurse Sylvia's charms. Hedwig even goes so far as propose marriage to her, but Nurse Sylvia turns him down with a heartfelt but rather cryptic response: 'I'm sorry. I can't.'

Other nurses on hand include Gloria Hammond (Mayo Methot), who's head over heels for Dr. Connolly; Ethel Smith (Renee Whitney), who uses her skills to charm gifts from her patients; and Beulah Schloss (Minna Gombel) who, with her beloved fiance, Pat (Edward Gargan), lends a tragic side note to the proceedings. Also in the film's cast is Louise Beavers as a patient who faints dead away when she discovers she's been cut in a brawl.

Eventually, we learn the reason for Sylvia's mysterious refusal of Dr. Hedwig's marriage proposal. We also discover what happened to her boorish spouse after their car wreck a few years earlier, and why Sylvia turns as white as a sheet and nearly passes out anytime the word 'insanity' is mentioned. And boy, does it make for quite a pre-Codian end; it's truly one that has to be seen to be believed.

Directed by Robert Florey, Registered Nurse makes the most of its short running time. Although most of the action takes place inside the walls of the hospital, there's never a dull moment and the film is full of little touches that keep things moving along nicely. In one scene, Dr. Connolly stops in to examine Sadie, the owner of the brothel, and she instantly recognizes him. 'Mr. Gregory,' she coos, 'fancy meeting you here.' Connolly stammers he's a doctor, and Sadie replies, with some amusement, 'Okay, doc. I never saw you before.'

Another fun scene comes when a couple of RNs poke fun at a probationary nurse while she's eating a meal of grilled kidneys. 'Talking of kidneys, did you see the beauty that Hedwig just took out of the old dame in 429?' one of the nurses asks. 'Aw, but kidney operations aren't much fun. Give me a good leg amputation. And, hey -- Connolly wielded a good scalpel on the liver . . .' The veteran nurses are barely able to mask their amusement as the probie covers her ears with her hands, abruptly abandoning her lunch.

If you've got an hour or so, check into City Hospital and spend some time with Registered Nurse. It's no masterpiece, but it might just be good for what ails ya.