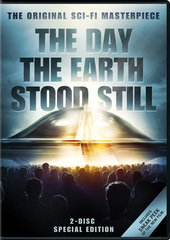 Some of the most worthy movies are both intelligent and entertaining because they attract people for the good reasons. Robert Wise's 1951 film The Day the Earth Stood Still is the exceptions to the rule. The film is considered one of the best science-fiction films of the '50s (the golden decade for the genre).

Teens might be more familiar with 2008's mediocre remake starring Keanu Reeves, but the original is the one they should see. It's an excellent film to introduce people to science fiction in general.

The Day the Earth Stood Still is based on a novel by Harry Bates: Farewell to the Master. Edmund H. North wrote the screen adaptation that stars Michael Rennie, Patricia Neal, Hugh Marlowe and Billy Gray.

Like most '50s sci-fi movies this one is a reflection of what was going on in the United States during the Cold War. However, Robert Wise's movie is a pacifist one. The action takes place in Washington D.C. where a normal day sees the appearance of a strange unidentified flying object on radar. The UFO travels 4000 miles/hour. The mysterious object is a flying saucer that lands in Washington and creates a panic. Two hours later, someone comes out of it, followed by an eight foot tall robot. Klaatu (Rennie) is an extraterrestrial with a human shape who has come to Earth on a peace mission. His quest is to make Earth understand that they have to stop their wars; otherwise it implies a great danger for themselves and the rest of the galaxy.

There's much more going on and the movie is filled with thrilling action. The spectator is at the edge of their seat from beginning till end. As a matter of fact, it was Robert Wise's desire to create tension immediately at the beginning. It works perfectly and thanks to that, we are eager to know what will happen next. Robert Wise is known as one of Hollywood's most versatile directors. He excelled at every genre: musicals (West Side Story, The Sound of Music), dramas (Until they Sail), horror (The Haunting), noir (Born to Kill), and thriller (The House on Telegraph Hill). He first started his career as an editor and is recognized for his work on Orson Welles' Citizen Kane.

Even if The Day the Earth Stood Still lacks the visual impact as 2001: a Space Odyssey, it remains highly interesting on its technical merit. There's something very modern in the visual style of the film. We are first introduced to the landscape with a magical view of the universe and its numerous stars and galaxies. The space ship and its two occupants create a deliciously technological and contemporary trio. The composition of some shots seems to perfectly calculated to satisfy our eyes. Cinematographer Leo Tover kept it simple and doesn't fill the screen with aggressive visual effects. There's something visually close to film noir in Wise's film, created by mysterious shadows and lighting contrasts.

The film doesn't contain a ton of special effects, but it doesn't necessarily need it. Those used remain simple but effective, especially for a movie of the '50s when the possibilities were more limited than they are today.

The Day the Earth Stood Still has a top-notch sound composition thanks to Bernard Herrmann's score. With the images of the galaxies the music mesmerizes us. Bernard Herrmann wanted to create a strange atmosphere; a mood from outer space more than music that would reflect individual emotions. Both acoustic and electronic instruments are used for a typical 'sci-fi' sound created with two Theremins. Miklos Rosza also used this peculiar electronic instrument for Hitchcock's Spellbound. This strange sound became sort of a cliche in sci-fi movies, but when The Day the Earth Stood Still was made it wasn't.

The cast is an unusual one because Robert Wise and Julian Blaustein didn't use Hollywood's biggest names. For the role of Klaatu, they wanted an unpopular figure to keep the idea of the unknown with the American audience. Spencer Tracy was first approached, but the idea was abandoned as he was at the peak of his career. Michael Rennie was chosen. Rennie was a British actor known in the United Kingdom for his role in I'll Be Your Sweetheart and The Wicked Lady, but he was completely new to American audiences. Rennie is perfectly cast for the role, not just because he wasn't famous, but also for his particular physical appearance. His facial structure is one that belongs entirely to him. Rennie is a calm actor who keeps it simples in order to transmit an emotion or an idea and is absolutely incredible as Klaatu.

Patricia Neal couldn't be better in the role of Helen Benson. She shows her versatility as a character that both embodies humor, sympathy, fear and concern. It's the same story for little Billy Gray, who plays her son Bobby. In an interview, Patricia Neal explained that this film amused her while making it. She constantly burst into laughter and didn't take it too seriously, but it didn't prevent her from delivering a convincing performance.

The role of Gort was the most difficult one to play. The very tall Lock Martin, who initially was a doorman at Grauman's Chinese Theatre, was chosen for the role of the eight foot tall robot. He wore a physically painful, heavy costume, (and Martin, despite his size, was not a strong man). And he had to make his character credible through gestures since there was no room for facial expressions. Today, such a character would probably be made from CGI.

The Day the Earth Stood Still remains a memorable and worthy film for the message it transmits to us. It's a movie that invites the human race to strive for peace when the United States and Russia hated one another. It shows how people have so little confidence for things that are strange to them and fear the unknown. It creates a sort of selfishness where the only desire is to get rid of the unknown instead of understanding it. The idea that Klaatu is a representation of Christ is among many additional interpretations of the film, but Robert Wise didn't see it this way when he made the film.

The Day the Earth Stood Still is a clever film that remains among the best sci-fi movies ever made. Don't miss it.