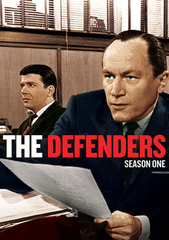 Standing By The Defenders, Season One

From 1961 to 1965, CBS Television was the home of The Defenders, an hour-long drama that become the gold standard of 'courtroom' shows, since the series eschewed the 'whodunit' premise of programs like Perry Mason in favor of tackling serious legal and social issues of the era (capital punishment, euthanasia, child abuse, etc.). The Defenders went on to score a total of twenty Emmy Award nominations, winning thirteen trophies including Outstanding Program Achievement in the Field of Drama three years in a row.

The origins of the critically-acclaimed series can be traced to a two-part presentation in 1957 on Westinghouse's Studio One, a live dramatic anthology whose antecedents stretch back to the days of radio. The production, written by Reginald Rose (12 Angry Men), was entitled 'The Defender,' and starred Ralph Bellamy and William Shatner as a father-and-son legal team assigned to defend a young man (Steve McQueen) accused of murder. The reception to 'Defender' was so positive that Studio One producer Herbert Brodkin persuaded Rose to tackle a weekly TV series featuring the characters. Neither Bellamy nor Shatner was interested in committing to such a venture, so the roles were recast with E.G. Marshall (as father Lawrence) and Robert Reed (son Kenneth).

The inaugural telecast was 'The Quality of Mercy;' a doctor (Philip Abbott) administers a lethal dose of morphine to an infant diagnosed with 'Mongolism' (this episode shows its age a bit, since the condition is now more commonly referred to as Down syndrome) and requires the services of Preston and Preston for his defense on first degree murder charges. Provocative story telling for its time, to be sure, but it's important to note that in The Defenders' first season controversial episodes such as this one were the exception and not the rule.

Not that the series didn't offer up challenging food-for-thought in its freshman year. In 'The Accident,' a shallow socialite (Evans Evans) seriously injures a child with her automobile while driving under the influence; the child is in desperate need of medical attention, but his parents (Lonny Chapman, Peggy Feury) refuse permission due to their deeply-held religious beliefs. 'The Treadmill' examines the plight of a man (Edward Binns) convicted of murder, yet having spent 25 years in a mental institution before his execution could be carried out, serious questions arise as to the morality of completing the sentence.

In 'The Search,' a man (James Congdon) confesses to a murder for which another man (Harry Millard) has already been executed, leaving Lawrence Preston to do some serious soul-searching as to how the justice system could failed. Lawrence and son Kenneth also defend a controversial client (Ben Piazza) in 'The Iron Man' -- a budding young Fascist whose heated political invective on a college campus results in the serious beating of one of his fellow students (Dino Narizzano).

For the most part, however, many of the installments in The Defenders' first season rely on 'silly melodrama or Perry Mason-style courtroom theatrics,' as described by TV historian Stephen Bowie. The show's turning point arrives in its thirtieth episode (there were 32 in all during Year One), 'The Benefactor.' A doctor (Robert F. Simon) is arrested for performing an abortion on a young girl (Collin Wilcox) made pregnant after being raped, and Preston pere and fils agree to take the case. Considering the subject matter - as controversial then as it is now - it was not surprising that the show's sponsors (Lever Brothers, Kimberly-Clark, and Brown & Williamson Tobacco) wanted nothing to do with this installment.

To its credit, CBS stood by its decision to air 'The Benefactor,' even though they wound up offering the ad time abandoned by the aforementioned sponsors to the Speidel Watch people (who obtained the vacated commercial spots at fire sale prices). A development such as this might have been the kiss of death for The Defenders -- CBS President James 'The Smiling Cobra' Aubrey was certainly no fan -- were it not for the fact that network chairman William S. Paley was, well, a defender of The Defenders. Paley was proud of the show's prestige (being a solid performer in the Top 30 of the Nielsens didn't hurt either) and the reputations of both creator Rose and producer Brodkin when it came to exemplary program quality.

The backlash to 'Benefactor' was minimal; 10 of CBS' 180 affiliates refused to air the episode, and out of close to a thousand letters received by the network nearly 11 to 1 were in favor. The episode -- and the show's four Emmy wins that year -- emboldened the creative minds behind The Defenders; as creator Rose remarked in an interview with a publication entitled The Viewer: 'We're committed to controversy.'

So you're probably wondering by now: why focus on a television show in a column that normally reviews movies that have slipped under classic film fans' radars? Because The Defenders meets that very definition. On The Defenders: Season One, released by Shout! Factory in mid-May of this year, writer Larry Cohen states the show hasn't been seen since its original run on CBS. This isn't entirely accurate; The Defenders was made available for syndication after it completed four seasons on the network, but there were very few takers (New York's WPIX-TV, which did show reruns in the late '60s was the exception), possibly due to the series' serious tone (it's not something you'd schedule after Gilligan's Island, for example). Its last sighting in syndication was on the (now defunct) Armed Forces Network in 1980; since that time, the program was mainly available for viewing in television archives and the occasional YouTube bootleg.

'It's hard to think of another series made after 1960, even one in black and white, that ran for as long as The Defenders (four seasons, 132 episodes) and yet hasn't been syndicated in nearly 30 years,' Bowie related to me in an e-mail exchange in 2011, when I worked on an essay celebrating the series' 50th anniversary. So the release of The Defenders' first season to DVD is a most celebratory event, and even though I'll freely admit a little bias (I'm a huge fan) I think the show holds up remarkably well (even when the episodes veer off into Perry Mason territory they're still good television, though you might want to take 'Gideon's Follies' with a hefty grain of salt). The writing and direction on the show meets the definition of first class, and the actors who appear in the episodes include up-and-comers like Gene Hackman and Robert Duvall (the show's creative minds had a rich pool of Broadway stage talent to draw upon).

Those of you familiar with Robert Reed as the fatherly sage from The Brady Bunch will find his Kenneth Preston a bit of a revelation; Ken, fresh out of law school and still wet behind the ears, is a bit of a hothead at times, but that impetuousness is tempered by the character's admirable idealism. E.G. Marshall never had a finer television role than as the experienced Lawrence Preston, a man eager to pass on his knowledge of the legal system to his son, and yet able to learn new tricks despite being the firm's 'old dog.' The first season also features Polly Rowles as the Prestons' secretary, Helen Donaldson and Joan Hackett (one of my favorites) turns up in several episodes as Ken's girlfriend, social worker Joan Miller. (The two female characters were phased out by Season Two when the show started to shift to the complicated legal issues that became its trademark.)

As a bonus on the set, the two-part Studio One presentation of 'The Defender' is included (previously released to DVD in 2006) as well as the series' pilot, a slightly longer version of the third episode, 'Death Across the Counter.' (There are some subtle differences in the pilot: a different actress plays Helen and a Mrs. Preston -- Lawrence's wife, Ken's mother -- also appears; by the time the series debuted it was decided the senior Preston would be a widower.) Interviews with associate producer Bob Markell and writer Larry Cohen (Branded, The Invaders), as well as a 1973 interview with star Marshall, round out the extras.

The Museum of Broadcast Communications describes The Defenders as 'the most socially conscious series the medium has ever seen.' Whether or not Shout! Factory continues its release of the series' subsequent seasons will depend a lot on you. So if you haven't purchased The Defenders: Season One, see what you can do to rectify this. Search through couch cushions. Rifle through those winter coats in the closets. Mug a Girl Scout. (Okay, maybe that last one isn't a good idea, otherwise you may require the services of real-life 'Defenders.')