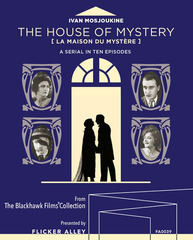 Where's That Been? - The House of Mystery

Mention 'cliffhangers' or 'serials' to a classic film fan and chances are they'll conjure up images of Saturday matinees, where kids gathered every week to see heroes like Flash Gordon and Dick Tracy battle it out with villains before they ended up in a precarious situation that would require attendance at that same theater the following week ('To be continued...'). But before becoming entertainment geared to younger crowds, chapter plays were enormously popular among all ages during the silent era -- productions like The Perils of Pauline (1914) and The Hazards of Helen (1917) were every bit as important as the feature film attractions they accompanied, and their influence is still felt today in modern-day classics as Star Wars (1977) and Raiders of the Lost Ark (1981).

Serials were phenomenally popular in Europe; German director Fritz Lang used cliffhanger elements in productions like The Spiders (1919), and France's Louis Feuillade made his cinematic reputation with chapter plays like Fantomas (1913) and Judex (1916). French movie audiences thrilled to what they called 'cine-romans' or 'films a episodes' -- it would be no exaggeration to state that these movies were an integral part of the country's cinematic economy both before and after the Great War, even if critics looked upon them as poor relations. Among those directors who produced cliffhangers was Joseph Ermolieff, who oversaw three such productions beginning in 1921, including La Maison de mystere (The House of Mystery).

Julien Villandrit (Ivan Mosjoukine) is the happiest man in Basses-Bruyeres -- Basses-Bruyees being the village where he resides, owning and operating a prosperous textile mill. Regine de Bettigny (Helene Darly) has agreed to his proposal of marriage, which has young Julien leaping for joy, but one individual who's not taking this news with good spirits is Henri Corradin (Charles Vanel), Julien's best friend and business partner, who sort of fancies Regine himself. Corradin schemes to put an end to the Villandrit's marital bliss by stoking suspicions in Julien about a family friend, an ex-banker named Marjory (Bartkevitch). Marjory demonstrates a little too much interest in Regine, and as such there can only be one explanation per the treacherous Henri: the two of them are having an affair!

What Julien and Henri don't know is that the attention Marjory lavishes on Regine -- expensive gifts and financial assistance to keep Julien's mill afloat financially when times are tight -- is born out of a dark secret: her father, General de Bettigny (Claude Benedict), is not her biological pop! Marjory is Regine's actual father (Regine is the product of an affair he had with Mother Bettigny [Nina Rayevskaya]), and he's eager to make sure she's well-provided for before he shuffles off this mortal coil (he's been diagnosed as not having long to live). Julien, in a fit of rage, attacks Marjory (thanks to Corradin, who hasn't held back in intimating the two are having an assignation); only then does Marjory reveal the secret. He beseeches Julien to keep the affair hush-hush, and a chastened Julian goes off to get help for the injured Marjory.

Returning with some of his workers, Julien is aghast when Marjory goes missing. But not for long, of course; Marjory's corpse is discovered nearby in what appears to have been a murder committed in the act of robbery. It doesn't look good for Julien: he's convicted on both circumstantial and misinterpreted evidence, and sentenced to twenty years at hard labor. For the remaining eight chapters of The House of Mystery, Villandrit will encounter tragedy and hardships as he channels his inner Richard Kimble to rebuild the life that has been stolen from him.

The House of Mystery is an unusual serial, unusual in that it is one of the few French chapter plays that survives in both its original version and the condensed feature film (which producers were obliged to provide for both export to other countries and domestic re-release). Director Alexandre Volkoff adapted (with Ivan Mosjoukine, Mystery's Julien) Jules Mary's novel of the same name; Mary, a prolific novelist, wrote many books centering on the theme of miscarriages of justice. The serial format is perfect for the grand scale of Mary's work (the events unfold over a period of more than twenty years), and while I have not seen the feature film version of Mystery I have doubts that it's as effective as the six-and-a-half-hour treatment afforded by the chapter play. The presentation of the plot never feels like it's padded or stretched-out, and from the inaugural chapter the viewer is completely sucked into the story.

The House of Mystery is an incredible bit of filmmaking; its serial elements are not that far removed from a daytime television drama; the only literal cliffhanging in the film occurs in the eighth chapter ('No Way Out'), and even then, the sequence doesn't conclude that installment. Director Volkoff displays a most fascinating visual sense (the marriage of Julien and Regine is presented in silhouette, a very interesting touch) and a command of pacing that would be the envy of anyone who aspires to work behind the camera. The acting, from a mixture of French and Russian performers, is simply superb; Mosjoukine's tragic hero demonstrates an incredible range, as Julien Villandrit is called upon to don various disguises (at one point he performs as a circus clown) once he makes his thrilling escape from the harsh penitentiary.

Director Volkoff and star Mosjoukine enjoyed a working relationship not unlike that of Josef von Sternberg and Marlene Dietrich or John Ford and John Wayne; the two men later teamed up to work on such features as Kean (1924), Les ombres qui passent (1924), and The Loves of Casanova (1927). (Mosjoukine even took a turn in the director's chair himself, helming The Burning Crucible in 1923.) The worst decision ever made by the pairing was to go their separate ways; Mosjoukine tried (and failed spectacularly) to establish a career in the U.S. while Volkoff saw his lavish Arabian Nights opus, Secrets of the Orient (1928), perform poorly at the box office.

The House of Mystery was painstakingly restored in 1992 by Renee Lichtig, and played to much acclaim at the Bologna Film Festival in 2002 (it was later shown in this country in June 2003 at New York's Museum of Modern Art). It's available to non-festival attendees in a first-rate DVD set from Flicker Alley, and I don't mind telling you I'm a little jealous of those who will experience its wonders for the first time. French film critic Louis Dellur -- no fan of serials -- said of Mystery at the time of its release: 'La Maison de mystere is a serial. They are a necessity. So be it. This one is intelligent, sober, frank, genuinely human...'