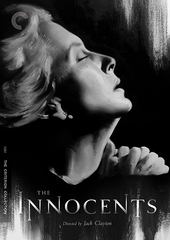 In my past reviews for this column, I've primarily reviewed comedies or films that weren't comedic, but that weren't completely dramatic. This time, I'm going to explore a totally different genre, because I want to show that young people might also like heavy dramas. This is the reason why I've chosen to review The Innocents. This movie is not only a drama, but a horror-drama. The Innocents is a British film directed by Jack Clayton in 1961, starring Deborah Kerr, Martin Stephens, Pamela Franklin, Megs Jenkins and Michael Redgrave in a minor role.

The Innocents takes place in England during the 19th-century. An uncle (Michael Redgrave) who can't take care of his nephew, Miles (Martin Stephens) and his niece, Flora (Pamela Franklin) hires a governess, Miss Giddens (Deborah Kerr) to care for them. Their last governess, Miss Jessel (Clytie Jessop) died about a year ago. Miss Giddens accepts, despite her lack of experience, and moves to the family's place in the country where the two orphan children live. It's a big manor located in the beautiful English countryside. When she arrives, Miss Giddens hears a voice calling Flora, but she can't tell where this voice is coming from. She then meets Flora, who hasn't heard the voice, and they become good friends. A few minutes later, Miss Giddens meets Mrs. Grose, the housekeeper. Flora's brother, Miles, is at school, but it won't take long before he'll be back home, because he has been, to everybody's surprise, expelled from school. Miss Giddens tries to understand why, but Miles doesn't want to talk about it.

If the life in this castle started in a quiet and peaceful way, it won't take long before changing. Progressively, Miss Giddens notices Flora and Miles' strange behavior. She has terrifying visions of a man and a woman who are not supposed to be part of the house, that of Miss Jessel and Quint (Peter Wyngarde), the ancient gardener, both of whom are now dead. Miss Giddens becomes obsessed by these hallucinations (although she thinks they are real), and is convinced Miss Jessel and Quint's spirits possess the children. What else will explain their strange behavior? Miss Giddens will try to save them, but being crazier herself, she brings them to a fatal ending.

I had never been a fan of horror movies, but there are some exceptions and The Innocents is one of them. The movie itself is not that scary, but creepy. However, when you watch it and tell to yourself 'what if this happened to me,' then, it becomes one of the most horrifying things ever. Of course, The Innocents is not like today's horror films. Unlike today's 21st-century horror movies, it is more refined. There is something poetic about The Innocents which makes the film beautiful. The Innocents is actually one of the most visually beautiful films I had ever seen. This is mainly due to the fine black and white cinematography created by Freddie Francis. The lights, the shadows, the white flowers, all make for a delightful spectacle for the eyes. The cinematography also adds certain strangeness to the film, especially during the visually mysterious hallucination scenes.

Deborah Kerr is definitely a model of acting in this film, able to change her emotions very easily. It's actually her performance in this film that made her a favorite of mine. The role of Miss Giddens is one of her best performances. Her clear and pretty British accent is delightful to hear. Martin Stephens and Pamela Franklin as the children are also perfect. There is something lovely, but also disturbing about them, which is just what we need for this kind of film. Martin Stephens is a kid, but very mature at the same time. He actually looks and acts more like a little man then a child. (Stephens also played a creepy child in Village of the Damned.) Megs Jenkins is also an appreciated actress starring in this film. She is warm and brings a lot to the movie. However, it's too bad Michael Redgrave only has a small part, because he really is one of a kind.

What is also appreciated about this film is it doesn't need a ton of scary scenes to scare us. Everything goes progressively. You can follow the story without necessarily having to hide behind your pillow every time someone opens a door or climbs the stairs. Of course, there is a worrying atmosphere, but this one is more suspenseful than terrifying. The movie takes place in a home with many secrets and things to discover (or not), which makes us think of Manderley, the famous De Winter manor in Rebecca. But there are some frightening scenes that teens will appreciate. For example the moment when Miss Giddens first 'sees' Quint when she is playing hide and seek with the children.

Finally, we have to talk about the music, or more precisely the sound, which is a major element in this film. There isn't really a soundtrack. As a matter of fact, the music is created by Flora humming 'O Willow Waly' (which we also hear at the beginning of the film), by Miss Jessel voice calling Flora like an echo, and by the sounds of nature: the birds, the wind, the insects, etc. The work of the sound is remarkable and also adds poetry to the film. This only proves ambient sounds can be as affective as music to create a certain atmosphere.

It's Halloween soon, so instead of watching something like The Exorcist, teens should watch The Innocents. It's a film they'll never forget and gives them the chance to see one of the greatest horror movies ever made.