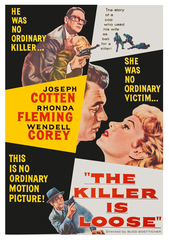 Where's That Been? - The Killer is Loose

It seems like a typical working day for teller Leon 'Foggy' Poole (Wendell Corey), as he conducts business transactions for customers at the savings and loan where he's employed, chatting with each as they approach his window. However, a fellow employee has noticed suspicious activity taking place toward the rear of the S&L several men are robbing the establishment, and have warned the manager (Don Beddoe) not to trip the burglar alarm. As the robbers make their escape, Poole makes a bid for heroics by trying to stop one of the men wielding a gun...but he ends up being knocked out for his trouble.

The incident is investigated by the police, under the direction of plainclothes detective Sam Wagner (Joseph Cotten). As Wagner and his men take statements from the S&L employees, one detail continues to nag at him: the holdup men knew the location of the burglar alarm, and one of them identified the manager by name. Sam suspects someone on the inside assisted in the robbery, and he plays that hunch by having Poole's phone wiretapped. Poole is caught making a phone call to one of the holdup men, and Wagner and Company soon arrive at Poole's apartment to make an arrest. Because their suspect has barricaded himself inside, Wagner and the police are forced to come in a-shooting. In the melee, Poole's wife Doris is killed.

Even though the judge takes into account the tragedy of Mrs. Poole's death, Mr. Poole does not get off the hook: he's sentenced to ten years at the state penitentiary. Two-and-a-half years in, Leon has shown good enough behavior to be transferred to the prison's 'honor farm.' That's all Poole needs to engineer a breakout (he croaks a prison guard as the two of them are driving into town); he swore to Wagner at his sentencing: 'Someday, Wagner...I'm going to settle with you for it...I'm certainly going to settle with you for it.' (And he's not just whistling Dixie, either. Why else would the movie be called The Killer is Loose?)

Shortly before director Oscar 'Budd' Boetticher established his cult filmmaking bona fides with such Randolph Scott westerns as The Tall T (1957) and Ride Lonesome (1959), he helmed this little noir sleeper scripted by Harold Medford, based on a Saturday Evening Post story written by John and Ward Hawkins. Boetticher began his directorial career with crime-oriented B-movies like The Missing Juror (1944) and Escape in the Fog (1945), so The Killer is Loose probably seemed like old home week to him. Killer is my favorite Boetticher non-Western, and had Budd not been so fortunate to hook up with Randy Scott and producer Harry Brown (as well as screenwriter Burt Kennedy), it's possible he could have continued churning out these low budget noirs (in fact, he momentarily returned to crime with the 1960 sleeper The Rise and Fall of Legs Diamond).

Killer is an interesting entry in the noir style because while the film's climax is presented at nightfall, much of its sordid details takes place during daylight hours. The movie offers up a sly commentary on the stifling blandness of suburban life by adding robbery and murder to the day-to-day routine. At the time of Poole's trial, Wagner is a newlywed, married to the lovely Lila (Rhonda Fleming); when Poole makes his escape, the Wagners are expecting their first born. Still, it's anything but peaceful in the Wagner household; Lila frets and worries due to the dangerous nature of her husband's job (the fact that he's been promoted to lieutenant and now sits behind a desk most of the day does little to alleviate her concerns) and Poole's brief on-the-lam status exacerbates the situation. (Lila is unaware Foggy has busted out because he has a vendetta: he's planning to take her life just as her husband took his wife's.)

I've always had an affection for Corey, because he left such a lengthy legacy of cinematic hard-luck losers with his passing in 1968. He was perfect playing the poor sap of an assistant D.A. who foolishly gets involved with Barbara Stanwyck's femme fatale in The File on Thelma Jordon (1950). (Corey also co-starred in two additional films with Babs, 1948's Sorry, Wrong Number and 1950's The Furies.) In fact, I knew things would not go well for Paul Newman's character when I watched The Rack (1956) several years ago because Corey was playing the lawyer defending him.

Corey is able to infuse Leon Poole -- not a likable individual, to be sure -- with a soft-spoken, sympathetic demeanor; it's almost as if Leon succumbed to a momentary lapse in good judgment when he agreed to be the inside man in the robbery because he's been a punching bag for so many other individuals in his life, who take perverse pleasure in ridiculing him and making him feel insignificant. This is all brought to the fore when one of the customers in line at the S&L the day of the heist is Otto Flanders (John Larch), Poole's old Army sergeant and the man who bestowed upon Leon the 'Foggy' nickname. Milquetoast Poole will eventually have the last laugh on Otto (he's taken his sarge and Mrs. Otto hostage in their home), but even then it's hard to laugh when Leon ruminates that his wife Doris was the only person in his life who never laughed at him...and that's all been taken away.

Cinematographer Lucien Ballard worked his magic on The Killer is Loose (Ballard also did Stanley Kubrick's The Killing, released the same year), adding much to a movie that is most memorable for its nail-biting suspense (particularly its climax). I don't know why this one is so neglected when the discussion focuses on Boetticher's oeuvre (it doesn't even rate a mention in the documentary A Man Can Do That, included with The Tall T disc in The Films of Budd Boetticher), but if you've not had the pleasure of sitting down with this one see what you can do about that, all right?