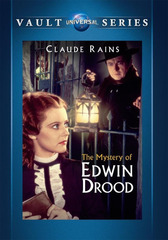 What Drood Dooed! - The Mystery of Edwin Drood

In the mid-1930s, Universal head Carl Laemmle had this crazy idea that Depression-era filmgoers would appreciate culture and highbrow entertainment, and in particular they'd flock to see high quality productions based on Charles Dickens, whose works, being in the public domain, came at an economical price. MGM had a hit with David Copperfield and was preparing a lavish version of A Tale of Two Cities with Ronald Colman, so Laemmle envisioned similar success for his more economical yet still pricy-for-Universal presentations.

Director Stuart Walker was accordingly shunted directly into The Mystery of Edwin Drood immediately following the wrap party for Universal's Great Expectations (1934), but the cost of these two films and the tepid response from the public helped push Laemmle out the door of his own studio the following year.

With the production of lavish and popular British productions of Dickens work in the '40s and early '50s, the Universal films soon became relegated to late-show fodder; this one was sold to TV as part of the famous Shock Theatre package, alongside Dracula, Frankenstein, and The Wolf Man. It's now available for inspection through the Universal MOD program right here at ClassicFlix, and it turns out to be a highly enjoyable film, even if it falls short of greatness.

The novel of the same name was incomplete upon Dickens' death, although various writers have tried their hand since to finish the story, and it has successfully been adapted for films, stage shows and even a hit musical (in which, just as with Mr. Sardonicus, the audience gets to decide the fate of the characters). Universal's film is quite a satisfactory effort, actually, with good performances and, as an added bonus for us Universal monster fans, sets from Dracula and Frankenstein in full display, as are well-known horror veterans E.E. Clive and Valerie Hobson. One of the screenwriters is John L. Balderston, Universal's #1 scare scribe (Dracula, Frankenstein, The Mummy, and several others, plus MGM's Mark of the Vampire and Mad Love).

First off, it's always fun seeing Claude Rains in a rare villainous part, and my goodness, what issues he has in THIS film. Rains is John Jasper, uncle and guardian of young Edwin Drood (David Manners), who's to be wed to childhood sweetheart Heather Angel. Jasper, an upstanding church official, is also an opium addict, and has the delusional hots for Miss Angel; when a newcomer to town promptly gets in a fight with Drood, Rains seizes the opportunity to devise an insidious and vile plot: murder his own nephew, blame it on the foreigner, and win the heart of the distraught maiden himself.

Director Stuart Walker had a short but interesting career; he went from this film to WereWolf of London (so much for culture) and then moved over to Paramount Pictures, where he spent the next five years producing B-movies, including the Bulldog Drummond series.

Claude Rains, of course, became one of the great supporting players in film history; his turns as the morally ambiguous police captain in Casablanca and the Nazi plotter in Notorious are triumphs. Yet The Mystery of Edwin Drood would be his only appearance in a Dickens film.

David Manners is an actor who often fails to impress, but considering he disappears midway through the film, he's not bad in this at all. Douglass Montgomery is the luckless new student in town, and Miss Hobson his lovely sister. You'll enjoy Walter Kingsford as the helpful of eccentric Mr. Grewgious.

Time out for a Smoke

The Motion Picture Production Code was quite clear on the subject of illicit drug use:

'Because of its evil consequences, the drug traffic should not be presented in any form. The existence of the trade should not be brought to the attention of audiences.'

Universal was apparently able to clear the picture through the Hays office by pointing to its pedigree as a Dickens classic, but the opium sequences are still a real eyebrow raiser; Zeffie Tilbury plays the not-so-ladylike lady of the opium den, Princess Puffer(!).

With the box-office failure of The Mystery of Edwin Drood (which had a negative cost of 50,000), Dickens may not have been considered box-office poison, but the spigot of his films tapped out fairly quickly; other than a few versions of A Christmas Carol (always a safe bet), Dickens was off-screen until David Lean resurrected him with the great Great Expectations (1946), followed quickly by British productions of Nicholas Nickleby (1947), Lean's Oliver Twist (1948), as well as Noel Langley's The Pickwick Papers (1952). The 1951 adaptation of Scrooge with Alastair Sim is the all-time most popular version of the perennial classic, too.

The Universal DVD of The Mystery of Edwin Drood looks fine, a little soft in the final reel, but well worth having and should appeal to fans of Rains, Dickens, Universal monster movies, or just intelligent, literary offerings from Hollywood's golden age.