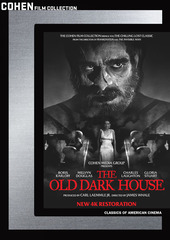 Where's That Been? - The Old Dark House

It's one of the hoariest cliches in all of moviedom -- but our feature presentation begins on a dark and stormy night; thunder, lightning, wind and rain threaten Philip and Margaret Waverton (Raymond Massey, Gloria Stuart) as they drive hopelessly lost in the mountains of Wales (and manage to miss a mudslide by mere inches). The Wavertons, along with their wastrel friend Roger Penderel (Melvyn Douglas), see a gloomy-looking house in the distance and decide to seek shelter there for the night.

The house belongs to the Femm family: a group of eccentrics every bit as macabre as the creations originating from the drawing pen of Charles Addams. Horace (Ernest Thesiger) is a cadaverous but cheerful sort who seems delighted to welcome company, but his sister Rebecca (Eva Moore) is a half-deaf religious fanatic who wishes Penderel and the Wavertons found refuge elsewhere ('No beds!'). These individuals are soon joined by another pair of stranded travelers: Sir William Porterhouse (Charles Laughton) and his unlikely chorus girl-companion Gladys (DuCane) Perkins (Lillian Bond).

Brother and Sister Femm appear to be relatively harmless, but the visiting quintet have no clue as to the dangers awaiting them as the evening continues on. The Femm's butler, a hulking mute named Morgan (Boris Karloff), has a tendency to get ugly once he's consumed enough wine (and the scarred Morgan isn't all that attractive to start with). In his cups, Morgan makes his way to the nursery; the Femms keep that room locked because it houses their brother Saul (Brember Wills) -- a pyromaniac who's delighted at the prospect of burning down Femm Manor.

Flush from the success of Frankenstein (1931), director James Whale took a mulligan with his follow-up feature, The Impatient Maiden (1932) -- a rather humdrum romance that really didn't suit the talents of Whale, who needed the perfect vehicle to showcase his flamboyant directorial style. He found such a project in a novel by British author-playwright J.B. Priestly (Last Holiday) entitled Benighted, retitled The Old Dark House when released here in the States. Priestly's book was a wry social commentary on post-WWI disillusionment, but in the hands of Whale and screenwriters R.C. Sherriff (who had penned the Whale-directed Journey's End [1930]) and Benn W. Levy (the scribe on 1931's Waterloo Bridge, also helmed by Whale) it became a jet-black horror comedy slyly parodying the 'haunted house' genre.

The actor who played the creation of Dr. Frankenstein, Boris Karloff, had yet to benefit from the stardom the role afforded him; he was still performing bits in features like Scarface (1932) and pulpy vehicles like Behind the Mask (1932) -- which was in production just as Frankenstein was being shipped to theaters. Karloff appeared as a nightclub owner in a (nowadays) rarely-screened feature entitled Night World (1932); some felt he was miscast, and so it was the studio's top priority to find their 'King of Horror' a showcase worthy of his lofty title. The role of the threatening Morgan wasn't particularly large, but it didn't matter since Karloff received top billing in Old Dark House. Universal even tacked on a disclaimer before the start of the picture reading: 'Karloff, the mad butler in this production, is the same Karloff who created the part of the mechanical monster in 'Frankenstein.' We explain this to settle all disputes in advance, even though such disputes are a tribute to his versatility.'

The Old Dark House marked the American film debuts of actors Charles Laughton and Raymond Massey; Massey didn't think much of the movie in later years (though he admitted in his autobiography he didn't actually see it), calling it 'a long and colourless juvenile part that didn't permit much acting.' It would be the only film Ray would make with Boris, whom he later replaced in the screen version of the play that brought Karloff much acclaim in the 1940s, Arsenic and Old Lace (the producers of the play refused to let Boris appear in the film because the production was still packing houses and Karloff was the reason why). In Massey's defense, he takes a back seat to Laughton (who's hilarious as the affable Porterhouse) and Melvyn Douglas; I'm not quite as sold on Douglas as other Old Dark House fans because I prefer the more mature acting Melvyn displayed in films like Hud (1963).

Gloria Stuart, on the other hand, loved Old Dark House, calling it 'a wonderful film' and lavishing much praise on her director ('...one of the most talented, meticulous directors I have ever worked for in films'). She's sensational in the role of Margaret Waverton, who threatens to become the victim of a little too much attention from Karloff's brutish butler. (There's a wonderful scene in the movie where Stuart's Margaret amuses herself by making hand shadows on the walls in the dining room hall only to have Karloff's silhouette shamble into view.) Stuart even plays a perfect foil to Moore's fanatical Rebecca Femm, who remarks after caressing Stuart's evening gown 'That's fine stuff...but it'll rot.' Making her way up to Stuart's half-exposed breast, Moore continues: 'That's finer stuff still, but it'll rot, too...in time.'

It's Ernest Thesiger who walks away with the proceedings as the skeleton-like Horace Femm; Thesiger is well-known among classic movie horror fans as Dr. Pretorius in James Whale's Bride of Frankenstein (1935) -- but he's an absolute treasure as the oddball who appears to be a gracious host at first ('It's only gin, you know. Only gin. I like gin.') yet gets a little miserly by the time a generous dinner of roast beef is served (his line 'Have a potato' is one that becomes funnier with repetition). My favorite moment of Thesiger's is when he reveals to his company that he's wanted by the police: 'After all -- can you conceive of anybody living in a house like this if they didn't have to?' The most unusual casting honors, though, go to the individual who plays Horace and Rebecca's 102-year-old father Sir Roderick; the bedridden invalid (who warns the Wavertons about Saul the Firebug) is played by John Dudgeon, a pseudonym for stage actress Elspeth Dudgeon. (Whale tabbed Elspeth to do a little gender bending when he wasn't satisfied with any of the other actors vying for the part.)

Upon its release to theaters in 1932, The Old Dark House bewildered more than its share of movie critics and the box office take wasn't what Universal hoped for regarding their Karloff interests. The movie got a re-release in the late 1940s, and then the rights to House eventually reverted back to its author. Director Curtis Harrington (Night Tide), who had established a close friendship with Whale (Harrington arranged for a screening of House at the British Film Institute in the 1950s) in the late 1940s, made inquiries about the whereabouts of the movie when he went to work for Universal in 1968. He approached director William Castle about securing a print of the film (Castle had directed a remake in 1963), but Castle told him that not only did he not own a print Universal couldn't provide him with one at the time he worked on the picture.

Indeed, Universal's story was that they had destroyed the negative and all prints when the rights returned to Priestly, but at Harrington's insistence, a lavender negative (fine-grain print) was eventually pulled from the studio's vaults. Since Universal had little interest in paying for the restoration of a movie whose rights they technically no longer owned, Curtis secured the cooperation of the George Eastman House to fund the work (and the Library of Congress made further improvements in the 1990s). Because The Old Dark House had not been in the studio's film library when Universal made their iconic classics (Dracula, Frankenstein, The Mummy) available to television, horror aficionados had to make do with revival theater showings in the 1970s (and eventually VHS and DVD releases).

The Old Dark House has been called one of Universal's most curious horror films: it's a movie that eschews shock and terror for subtler scares, and film historian William K. Everson once posited that only an Englishman could really appreciate the dry, mordant wit. (Those familiar with the movie through photos and stills were somewhat disappointed, but I believe it's one of those vehicles in which repeated viewings reveal just how delicious it is.) I see the film as Whale's subversive way of selling the studio a bill of goods when Universal was probably expecting something along the lines of The Cat and the Canary (1927). No, The Old Dark House turns that movie and all its imitators on its head, reveling in the presentation of a night in a mansion filled with lunatics as just another day to be marked off the calendar. Have a potato.