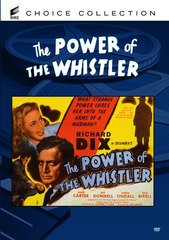 Where's That Been? - The Power of the Whistler

May 16, 1942 marked the premiere date of one of radio's longest-running mystery anthologies. It was known as The Whistler, and it specialized in dramatizing tales of murder and other malfeasance, but the reason why the program was titled as such was it was hosted by an omnipresent narrator who frequently opened the program (after an unforgettably haunting thirteen-note theme created by Wilbur Hatch) with: 'I am the Whistler...and I know many things, for I walk by night...I know many strange tales, many secrets hidden in the hearts of men and women who have stepped into the shadows...yes...I know the nameless terrors of which they dare not speak!'

Calling The Whistler a mystery series is a bit misleading: listeners knew who the guilty party was from the get-go; the appeal of the show was discovering how that individual would be caught, and s/he would be caught, usually in the form of a coda in which The Whistler explained how that person overlooked a tiny detail that wound up tripping them up. (A practice later co-opted by TV's Alfred Hitchcock Presents, I should note.)

In the early years of the program, The Whistler was an active participant in the stories -- usually goading the criminal at every turn -- but this was eventually discarded and The Whistler was satisfied to let the malefactor hang himself with his own rope while he observed from the sidelines. There were a number of actors portraying The Whistler over the years, including future TV icons Gale Gordon (The Lucy Show), Joseph Kearns (Dennis the Menace) and Marvin Miller (The Millionaire), but announcer Bill Forman had the gig the longest and even he didn't receive on-air credit until 1951.

If you've a passing familiarity with The Whistler, chances are it's due to the fact that close to 500 transcriptions of the some 700 episodes originally broadcast managed to survive the ravages of time and neglect and are available from companies who specialize in selling old-time radio on CD or cassette. The odd thing is: during the program's run from its debut to its curtain call on September 22, 1955, The Whistler was primarily presented on CBS Radio's West Coast regional network (under longtime sponsor Signal Oil). If you were in the listening area, good on you, but if you were on the East Coast you were out of luck (though The Whistler did make two short East Coast runs in the summer of 1946 and from March 26, 1947 to September 29, 1948). The kicker is the show was so popular among West Coast listeners that two years after the program's debut, creator Donald J. Wilson inked an agreement with Columbia Pictures to bring the series to the silver screen.

Columbia's Whistler franchise began appropriately enough with The Whistler (1944), a tightly-plotted little B-noir directed by future horror king William Castle (House on Haunted Hill, The Tingler), who would direct four of the eight Whistler programmers in total. Richard Dix (Cimarron, Man of Conquest) would star in seven of the eight films, the final entry (The Return of the Whistler) featured Michael Duane. Beginning in May of this year, Sony Pictures has been bringing out most of the Whistler films through their Choice Collection, including the third film in the franchise, The Power of the Whistler (1945).

In Power, Dix is identified as 'William Everest,' thanks to the omnipresent Whistler (Otto Forrest) -- but those people Everest encounter during the movie's proceedings won't learn his identity until the end of the film, and neither will Everest; he's suffering from what one critic once termed 'noir's version of the common cold:' amnesia. It appears to have been brought on by a near collision with an automobile, causing the unfortunate Everest to hit his head on a lamppost. Dazed and confused, Everest eventually makes his way to a bar colorfully called 'The Salt Shaker.'

Inside the bar, Everest becomes the focus of attention for young department store clerk Jean Lang (Janis Carter), who's there with her sister Frances (Jeff Donnell) and Francie's fiance Charlie Kent (Loren Tindall). Showing off with a deck of cards, Jean announces she's going to tell Everest's fortune, and is positively gobsmacked when she twice pulls up the ace of spades (the death card) and the two of clubs, signifying death is to occur within the next twenty-four hours. Compelled to warn the stranger, Jean follows Everest out of the bar and tells him what has happened. That's when she learns of his amnesiac state, and she agrees to help 'George' (her nickname for him) discover his identity.

The Power of the Whistler is a bit of a letdown from the first two outstanding entries in the Whistler series (both The Whistler and The Mark of the Whistler represent the best of the franchise, in my opinion), but that's only because Everest's 'secret' starts to become all-too-apparent after the first half-hour of the film. This is not a detriment to its enjoyment, however; the tone of Power shifts gears and concentrates on white-knuckle suspense as Francie attempts to convince the law that Jean is in great danger just being in Everest's company. Richard Dix did some of his best acting in these unassuming little programmers, and much of the fun of the Whistler vehicles is watching him work as both frightened victim and sinister villain (and in the case of Power, both).

Despite its B-picture pedigree, The Power of the Whistler is a breezy bit of entertainment featuring solid performances from Dix, Carter (also in The Mark of the Whistler) and Donnell, who you may know from such noirs as The Blue Gardenia (1953) and In a Lonely Place (1950). The Whistler films were a good showcase for many of Columbia's contract players; you'll recognize Three Stooges nemesis Kenneth MacDonald as the warden of a mental hospital, as well as Tala Birell, John Abbott, Murray Alper and Nina Mae McKinney. Power was directed by the incomparable Lew Landers (The Boogie Man Will Get You, The Raven), who was unsurpassed in cranking them out fast and on budget.