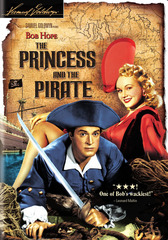 Where's That Been? - The Princess and the Pirate

Eighteenth-century cutthroat Captain Barat (Victor McLaglen) -- whose possession of an iron claw in his right hand has earned him the nickname 'The Hook' -- has just finished burying three years' worth of treasure and plunder on a deserted island...he then shoots and kills the crew member (Brandon Hurst) who drew a map to its location after the poor soul brags that he could recreate the map 'with my eyes closed.' The Hook is just getting warmed up; he decides to capture the Mary Ann, a ship numbering the Princess Margaret (Virginia Mayo) among its passengers. The Princess is traveling incognito to a rendezvous with her commoner fiance, whom her father (Robert Warwick) does not wish her to marry.

The Avenger, Hook's ship, quickly lays claim to the Mary Ann and Barat decrees that all the men be killed while sparing the women. This prompts one of the passengers, a third-rate entertainer named Sylvester the Great (Bob Hope), to don drag and pose as a Gypsy woman to avoid being forced to walk the plank. Sure, Sylvester is a lily-livered coward...but as the Gypsy, he's able to escape The Avenger in a dinghy with the Princess thanks to one of The Hook's crew members, a pixilated pirate known as Featherhead (Walter Brennan) -- who, unbeknownst to Sylvester, has given him The Hook's treasure map. Sylvester and the Princess miraculously manage to reach the colony of Casarouge, where they hope to meet up with Featherhead's cousin. The cousin is out of town, and the two fugitives find themselves securing work on stage at a saloon (the 'Bucket of Blood') to finance their unintended stay.

On opening night, Princess Margaret is kidnapped...and in his quest to find out the identity of her abductors, Sylvester meets with La Roche (Walter Slezak), the Governor of Casarouge...who reveals he's the party responsible. La Roche knows of Margaret's true identity, and plans to ransom her for a price tag of one million doubloons. If that wasn't trouble enough, The Hook arrives in Casarouge, and it turns out both he and La Roche are in cahoots; furthermore, The Hook believes the Gypsy to still be on Casarouge and in possession of his map...and after a few inquiries, is able to piece together that the Gypsy gal and Sylvester are one and the same.

Once he's learned that he has the map in his possession, Sylvester must figure out a way for he and the Princess to escape again -- but he doesn't count on Featherhead rendering him unconscious so the pirate can tattoo a copy of the map on his chest. To avoid a death sentence, Syl falls back on his theatrical experience to impersonate The Hook...and eventually all comes out in the wash, with Margaret reunited with her true love.

Film historian Leonard Maltin once described the Bob Hope vehicle The Princess and the Pirate (1944) as 'one of Bob's wackiest'...and if it isn't, it's definitely one of the comedian's most popular, as evidenced by it's upcoming rerelease to DVD October 14th. To put this in a proper frame of reference, my father has never found anything remotely funny about Bob Hope -- yet one night, when Pirate was being shown on the once-proud AMC, he laughed as heartily at the comedian's antics as I did. I think that because Pirate has more plot than usual for a Hope movie (these always seem to rank highly as non-fan favorites -- like 1940's The Ghost Breakers, for example) plus the fact it was filmed in lush Technicolor (probably to imitate The Black Swan [1942]) makes it more accessible to those people not inclined to like the man's work.

The Princess and the Pirate was produced by Samuel Goldwyn, who paid Paramount 33,500 to use their star comedian for twelve weeks...during which time Goldwyn made two comedies with Hope, Pirate and the earlier wartime romp They Got Me Covered (1943). In return, Paramount received the services of Goldwyn contractee Gary Cooper so they could make For Whom the Bell Tolls (1943). In Pirate, there's an amusing in-joke that references this when Bob's Sylvester is told by three of the Goldwyn Girls ('They're real...and in Technicolor, too' he jokes) to 'ring the bell once for Suzanne, twice for Nanette, and three times for Yvonne.'

'Yeah,' he cracks, 'when you hear that thing all of you come --- never mind for whom the bell tolls.' Hope's character is pretty much like this throughout the entirety of Pirate, making twentieth century-asides to the movie audience, flying right over the heads of the other characters. My favorite is a great throwaway gag in which he boasts to Mayo's Princess of his glowing press notices, particularly an extended engagement on 'the road to Morocco': 'I would have been sensational, only some overage crooner with laryngitis kept crabbing my act.'

Pirate succeeds so well because it contains the main ingredient integral to an outstanding Bob Hope vehicle: placing the comedian's comedy against a background of menace. And there has never been two finer villains in a Hope comedy: Victor McLaglen wisely chooses to let the star carry most of the laughs by playing it straight as the intimidating Hook, succumbing to a bit of fun in a classic scene where he pretends to be Sylvester's reflection in the time-honored 'mirror bit.' Walter Slezak's La Roche is a more suave, urbane villain but by no means less dangerous...and yet he, too, gets a great opportunity for laughs in a sequence where he invites Sylvester to share his outdoor bath -- not knowing (nor does Sylvester) of the map tattooed on his bathing partner's chest.

Goldwyn gal Virginia Mayo makes a most beautiful leading lady, and even entertains with a (dubbed) musical number ('Kiss Me in the Moonlight') in the manner of the later Goldwyn comedies she co-starred in with Danny Kaye like The Kid from Brooklyn (1945) and The Secret Life of Walter Mitty (1947). Walter Brennan provides a lot of hilarity in an atypical performance as the demented Featherhead (as a friend of mine once observed, Brennan's character is 'right out of a Tex Avery cartoon'); Marc Lawrence and Tom Kennedy also step out of their wheelhouses as members of the pirate crew. One of my favorite character thesps, Maude Eburne, has a scene-stealing bit as a landlady who informs Hope and Mayo that, yes, there used to be another hotel in Casarouge until it mysteriously burned down...as she casually strikes a match to light her pipe.

Producer Goldwyn provided Hope with an A-list budget that included a plethora of gagmen (many of Bob's scribes from his radio show worked uncredited on Pirate, like Melvin Frank and Norman Panama) and director David Butler -- who not only helmed Hope's other Goldwyn romp, They Got Me Covered, but Caught in the Draft (1941) and that engagement in Morocco the comedian alludes to in the movie. At the risk of giving too much away, The Princess and the Pirate also features one of the greatest closing gags of any Bob Hope film: Mayo's Princess runs to the arms of 'some bit player from Paramount,' ensuring Sylvester doesn't wind up with the girl. 'Boy, this is the last picture I do for Goldwyn!' laments Bob at this turn of events...and apparently he was as good as his word, because it was.