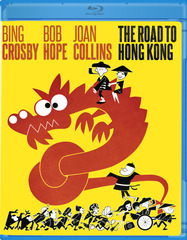 Where's That Been? - The Road to Hong Kong

In 1940, a musical comedy entitled Road to Singapore kicked off one of Hollywood's most popular film series by teaming three of Paramount Pictures' biggest motion picture draws: actor-crooner Bing Crosby, comedian Bob Hope and actress-singer-sarong model Dorothy Lamour. The two men were great friends off-screen -- often appearing on each other's radio programs, The Pepsodent Show (Bob) and The Kraft Music Hall (Bing) -- and with the good fortune of inheriting a film that was originally conceived as The Road to Mandalay for husband-and-wife duo George Burns and Gracie Allen, the boys (and Dottie) found themselves starring in one of the huge box office champs of that year. (Singapore had purportedly been offered to Fred MacMurray and Jack Oakie, though in later years, neither actor remembered being pitched the project.)

Bing, Bob and Dottie continued their shenanigans in a 1941 follow-up, Road to Zanzibar, and their third outing, Road to Morocco (1942), would prove to be the most popular of their 'Road trips' -- garnering two Oscar nominations, including one for Best Original Screenplay. Road devotees believe Morocco to be the funniest film in the franchise, though I've long argued that Road to Utopia (1946), the fourth entry, outpaces it in the laughs department (not only do you have Robert Benchley on hand as 'narrator' but its closing gag is falling-down hysterical). (Utopia also nabbed a Best Original Screenplay nomination.) Road Picture #5 took the trio to Rio (hey, that rhymes!) a year later and in 1952, Road to Bali would be the first and only Technicolor offering in the franchise.

There was a ten-year gap between Bali and the final film in the 'Road' series, 1962's The Road to Hong Kong. Older but no wiser (both Crosby and Hope were approaching 60 at the time of the film's production), Bing (as Harry Turner) and Bob (Chester Babcock) play a pair of ex-vaudevillians working as con men in Calcutta, India, attempting to fleece the locals with a 'Fly-By-Yourself' kit. Demonstrating the apparatus, Chester sustains an injury that brings about memory loss and the duo receive aid at a lamasery where a mix of memory herbs restores Chester's powers of recollection.

The herbs prove to be trouble for the two men; Chester inadvertently memorizes the formula for a rocket fuel that is to be used in a space exploration experiment masterminded by the megalomaniacal leader (Robert Morley) of a secret society known as 'The Third Echelon.' The organization attempts to pry the formula out of Chester's gray matter, with loyal Echelon minion Diane (Joan Collins) assigned to seduce the hapless Chester to accomplish the task. Diane has a change of heart when she learns both Harry and Chester will be dissected once they've served out their usefulness, and so she agrees to help the duo escape the clutches of the sinister group.

Written by Melvin Frank and Norman Panama, The Road to Hong Kong would provide a successful send-off to the movie partnership of Bing Crosby and Bob Hope. Frank and Panama (who also directed) were the perfect candidates for the final Road film; they were responsible for the previously mentioned Utopia, and had worked with both Bob (they had recently penned The Facts of Life for him and Lucille Ball) and Bing (they authored 1954's White Christmas) during their professional writing-directing-producing careers. In addition, Hong Kong relies heavily on the formula of placing the comedy against a background of menace (Hong Kong's plot is also similar to Danny Kaye's Knock on Wood, which Frank and Panama masterminded). The menace in Hong Kong is a sly spoofing of the Space Race and espionage pictures...yes, Hope and Crosby were doing the 'spy thing' months before the first James Bond picture, Dr. No (1962), became a hit with moviegoers.

With spy movies and space exploration at the corner of its comedy, why is Hong Kong the most disappointing Road film in the series? The answer may lie in the fact that the third member of the trio, Dorothy Lamour, was originally not part of the project; Lamour herself claimed she only learned about Hong Kong by reading about the production in a newspaper. She had a champion in Bob Hope, who lobbied hard to include Lamour -- it was Crosby who wanted a younger actress, and he had such foreign beauties as Brigitte Bardot, Gina Lollobrigida and Sophia Loren on his short list. In the end, the role of the girl who comes between Bing and Bob went to Joan Collins, who I'm sure you all remember from her long-running role in the 1981-87 television sitcom Dynasty. (Yes, I'm being facetious about that.) Collins, while indisputably easy on the eyes, didn't quite possess the propensity for comedy as her predecessor.

Lamour eventually snagged a small part in The Road to Hong Kong in an extended scene toward the end of the picture (she also performs a song, 'Warmer Than a Whisper') that to my mind is the highlight of the movie. Attempting to elude several goons from the Third Echelon, Harry and Chester duck into a nightclub where they meet Dottie and ask for her help. 'If you don't save us, there'll be blood all over the screen!' pleads Chester. 'Well, don't fight it,' Dottie returns. 'Look what it did for Spartacus!' 'You can't forget all those pictures we made together!' continues Chester. 'Neither can I -- that's why I'm working over here!' she responds.

Other fans contend that the ten-year wait between Bali and Hong Kong unintentionally slowed the momentum of the franchise; a third argument posits that Crosby and Hope were getting a bit long in the tooth for the sharp, fast-paced wackiness that had been the series' trademark. Crosby even admitted: 'Filming is kind of difficult for someone at my time of life. I'm too old to get the girl and not old enough to be her granddad.' (Bing appeared in only two theatrical features after Hong Kong, Robin and the 7 Hoods [1964] and Stagecoach [1966], not including a cameo in his partner's final feature film comedy, 1972's Cancel My Reservation.) Hope valiantly tried to keep his hand in as far as theatrical films went but even he eventually realized his characterization as a wisecracking ladies' man was difficult to maintain once he reached that age of collecting Social Security. It's no surprise that Peter Sellers, who appears in a cameo as an Indian neurologist treating Chester's memory loss (Sellers appears to be channeling the same character from 1960's The Millionairess -- 'Goodness gracious me!'), nearly walks off with the picture; clearly the comedic torch was being passed to a younger generation.

If you're a fan of the Road pictures, however, The Road to Hong Kong is a pleasant enough mirth generator: the Hope-Crosby-Lamour interaction is worth the price of admission, and the movie also features some amusing cameos (my favorite is Jerry Colonna as a man who asks Bob for a match; Hope's longtime radio sidekick also had bit roles in Singapore and Rio). It was the only film in the series not to be produced by Paramount (a United Artists release, Hong Kong was filmed in England at Shepperton Studios) and has just been released on Blu-ray for the first time (as well as re-released on DVD) by Olive Films. The two men who made traveling such a comedic delight show that they're still up to the task of 'teamwork' in their final curtain call.