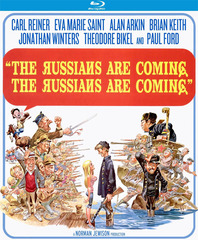 A Russian submarine manages to run aground of a sandbar off the coast of Cape Ann, Massachusetts (dubbed 'Gloucester Island' in the film) and a crew of nine sailors, headed up by Lieutenant Yuri Rozanov (Alan Arkin), are sent ashore in search of a motor launch to free the sub rather than risk embarrassment radioing for help. Rozanov and a younger sailor named Alexei Kolchin (John Phillip Law) arrive at a cottage that's being rented by New York playwright Walt Whittaker (Carl Reiner) and his family; the two Russians attempt to bluff the Whittakers into thinking they're Norweigans (Rozanov pronounces it 'Nor-wee-gans'), but Walt's bratty son Pete (Sheldon Collins) has guessed the real truth, and the family are held at gunpoint by Rozanov and Kolchin.

Kolchin is ordered to keep watch on the Family Whittaker while Rozanov and the remaining seven sailors head into town (with the Whittaker's station wagon) in search of the boat. The Russian sailors run out of gas along the way, and after arriving in town they subdue postmistress Muriel Everett (Doro Merande) and steal her sedan to continue their trek. Muriel manages to contact telephone operator Alice Foss (Tessie O'Shea) before she's trussed up by the visitors, and Alice notifies police chief Link Mattocks (Brian Keith) of the Russian 'invasion.'

Fear and rumors start to percolate throughout the island town; Mattocks and his men have their hands full trying to investigate what's going on, with a paranoid civilian militia headed up by American Legion uberpatriot Fendall Hawkins (Paul Ford) constantly underfoot. Chaos is the order of the day: Walt, who manages to overpower Kolchin and relieve him of his gun, winds up having to head for town on a child's bike and is eventually recaptured by Rozanov, who ties him up to Alice while the other sailors steal a boat belonging to a U.S. Senator.

The need for the motor launch eventually becomes moot; the sub floats off the sandbar with the tide and the misunderstandings and complications in town are eventually sorted out in the wash. But when the Russian sailors who've made off with the senator;s boat fail to return from their mission, the sub's captain (Theodore Bikel) is convinced they've been captured and threatens to destroy the town with the vessel's deck gun. It promises to be an ugly standoff between the town and the Russians (a metaphor for the Cold War itself)...until a potentially tragic event unites the two sides, demonstrating that despite their differences, people will rally together and reveal their better nature.

The Russians are Coming, The Russians are Coming (1966) was one of those movies I made a point to catch whenever it aired on television in the halcyon days of my youth. I believe it may have been because of its farcical plot that shows the unattractively humorous side of human beings -- people seem to be at their most hilarious when they've thrown common sense and inhibitions to the four winds. (I don't think it's any coincidence that Russians bears a strong resemblance to 1963's It's a Mad Mad Mad Mad World: both films were scripted by William Rose, and several actors -- Reiner, Jonathan Winters, Paul Ford, Cliff Norton and Ben Blue -- are present in the casts of both pictures.)

Russians' source material was a 1961 Nathaniel Benchley novel, The Off-Islanders, which is interesting in that Benchley's son Peter also wrote a successful book with New England characters that later inspired a film, the 1975 blockbuster Jaws. (Nathaniel's father -- and Peter's granddad -- was Robert Benchley, the humorist who moonlighted as a character actor in many popular comedy shorts and movies like Foreign Correspondent [1940] and I Married a Witch [1942].) The book attracted the attention of director Norman Jewison, who was gradually transitioning from directing fluffy comedies like The Thrill of It All (1963) and Send Me No Flowers (1964) to more serious fare like The Cincinnati Kid (1965). Jewison saw much potential in the satirical content of what would eventually became Russians, and believed it possible to make a strong political statement leavened with a lively dose of farce.

It wasn't smooth sailing during the production. Jewison asked the U.S. Navy for the loan of a submarine and was turned down flat; the representatives argued that a scenario in which a Russian sub got stranded on a sandbar was ludicrous and the Navy not knowing about such a sub even more so. (They failed to recall an earlier incident involving a vessel in San Francisco harbor, where one of the crew came down with an attack of appendicitis.) The Navy also put the kibosh on Norman using a Russian sub, so the director was forced to rely on art director Robert F. Boyle to construct a fake vessel -- one made up of four sections with separate motors to power it. Boyle also worked wonders in creating the fictional town in the movie, seeing as how it was not filmed off the coast of Massachusetts (the weather was too cold) but a bit further west, around Mendocino and Fort Bragg, California.

At the time of its release, The Russians are Coming generated a lot of positive buzz, both in the political and show business worlds; in Washington, the film was singled out by Alaskan Senator Ernest Gruening for attention in the Congressional Record, and in Moscow, the movie played to much acclaim from an audience comprised of the Soviet film writers' union (War and Peace director Sergei Bondarchuk was in tears by the end of the film). Russians garnered four Academy Award nominations, including Best Picture, Editing (future director Hal Ashby worked on the film) and Adapted Screenplay.

Now here's where I lower the boom a bit: the effusive praise for The Russians are Coming has always been a bit puzzling. The movie has not aged well, and at best it's a mildly entertaining sitcom farce that has difficulty measuring up to better Cold War satires like One, Two, Three (1961) and Dr. Strangelove or: How I Learned to Stop Worrying and Love the Bomb (1964). This is not to suggest the movie isn't worth a look; Russians' greatest strength is in its first-rate cast, particularly Alan Arkin in his film debut (well, he did appear in 1957's Calypso Heat Wave, but only as the lead singer of the Tarriers). Arkin's turn as Rozanov earned Russians the fourth of its Oscar nominations, and set in motion (after an impressive stage career) the acclaimed film resume of the man I've often considered the American Peter Sellers. (Yes, I am a bit biased in this assessment, but you'll notice than Alan played one of Sellers' best-known characters in 1968's Inspector Clouseau.) Arkin didn't triumph in the Oscar race (though he did nab a Golden Globe), and would have to be nominated two more times (the second was for 1968's The Heart is a Lonely Hunter) before winning a Best Supporting Actor trophy for 2006's Little Miss Sunshine.

In the role of writer Walt Whittaker, Jewison cast Carl Reiner -- undeniably appropriate, since Reiner did write for a living (as creator of The Dick Van Dyke Show) in addition to performing. As the sole voice of reason in the film, Reiner does get an opportunity to participate in some of Russians' physical comedy as well (the scene where he's tied to phone operator Tessie O'Shea as they attempt to warn the town is pretty funny). The money men were initially reluctant about Carl's casting (they felt he wasn't a big enough name) but choosing Eva Marie Saint to play Reiner's wife Elspeth assuaged any of their initial hesitations.

Russians also features comical performances from Brian Keith, Jonathan Winters ('We've just got to get organized!'), Paul Ford and Ben Blue (Ben's the town drunk, and spends the bulk of the film chasing after his horse so he can warn the town's inhabitants Paul Revere-style). Theodore Bikel (The African Queen, The Defiant Ones) steals a great deal of Russians as the stern boat captain (Jewison thought Bikel would have no trouble with his all-Russian dialogue, seeing as how the actor moonlighted as a singer and sang Russian folk songs), but the old-time radio fan in me enjoyed the small contribution of Parker Fennelly as the deaf husband of postmistress Doro Merande; Parker is completely oblivious to the fact that the 'invaders' have trussed up his wife and left her suspended against a kitchen wall as he goes about his normal morning routine.

Released to DVD in 2002, The Russians are Coming, The Russians are Coming has been out-of-print for some time but received a resurrection in February of 2015 thanks to Kino Lorber, who also made the movie available for the first time on Blu-ray. Both the DVD and Blu-ray releases feature the movie's original theatrical trailer and a short 'making of' featurette in which director-producer Norman Jewison reminisces about a work that is still special to him nearly half a century after its release.