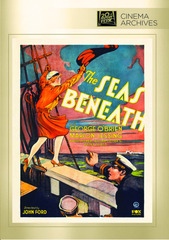 Where's That Been? - The Seas Beneath

As World War I comes to a close, a U.S. Navy vessel known as the S.S. Mystery Ship sets sail from a Yorktown harbor. It's not known as the 'Mystery Ship' because the Navy has run out of names (nor is it a reference to the Blues Image song 'Ride, Captain Ride' -- that would be silly); it's earned that designation because its mission is to be a decoy ship. Under the command of Lieutenant Robert 'Bob' Kingsley (George O'Brien), the Mystery Ship is under orders to take on a German U-boat (U-172), commanded by Baron Ernst von Steuben (Henry Victor), and provoke it into firing by convincing the U-172 it's merely a merchant vessel. (There's a U.S. submarine following the Mystery Ship, which will attack the U-172 and end its impressive record of destroying ships near Gibraltar.)

The Mystery Ship is staffed with both an expert gun team and an untested, 'wet-behind-the-ears' naval reserve unit -- many of its members have yet to experience battle. At a port in the Canary Islands often used for refueling U-boats, the crew gets liberty and goes ashore for drinking and carousing, notably Ensign Richard 'Dick' Cabot (Gaylord Pendleton), who succumbs to the charms of an alluring woman (Mona Maris) named 'Fraulein Lolita.' Skipper Kingsley is not immune to what turns a man's fancy, either; he falls hard for Anna Marie (Marion Lessing) while investigating whether or not the U-172 is in the area. As luck would have it, it is -- allowing Bob to confront his nemeses in an awkward encounter at one of the local dives.

But what Kingsley has not yet learned is Anna Marie is the sister of Ernst von Steuben and the love interest of Franz Stiller (John Loder), commander of a trawler that has a rendezvous with the U-172, which will allow Anna Marie to visit with her brother for a short time while the submarine undergoes re-fueling. That trawler will obtain a stowaway in the form of Ensign Cabot, who was unfortunately left behind in port by Kingsley and his men after passing out from doctored wine in Lolita's room. Cabot attempts to sabotage the re-fueling effort of the U-172, and is shot and killed for his efforts. This sets in motion the eventual battle between that German U-boat and the Mystery Ship, and endangers the romance that has blossomed between Kingsley and Anna Marie.

The advent of talking pictures meant a difficult transition for director John Ford; after silent film successes like Four Sons (1928) and Hangman's House (1928), making movies with sound must have seemed for the man affectionately known as 'Pappy' like reinventing the wheel. It took time for Ford to find his footing, and efforts like The Seas Beneath (1931) clearly demonstrate this. It's not a terrible movie, but like most early talkies it's a stilted one, with sluggish pacing and awkward performances from many of its acting principals. The content of Beneath -- scripted by longtime Ford collaborator Dudley Nichols (Nichols would win a Best Screenplay Oscar for Ford's The Informer) from a story by James Parker, Jr. -- is similar to a Ford movie released a year earlier, Men Without Women (1930).

The pages of movie history are filled with references to Ford's famed 'stock company' of actors, and one of its earliest members was George O'Brien, who graced such Ford features as The Iron Horse (1924) and 3 Bad Men (1926). In silent films, acting deficiencies were often hidden by the lack of sound, which explains why O'Brien (who was undeniably blessed with ruggedly handsome looks) appeared in classics like The Blue Eagle (1926; also directed by Ford) and Sunrise (1927). The moment audiences heard O'Brien speak, however, his popularity started to slide and he soon ventured off into the film world as the hero of a number of B-westerns. But Pappy never forgot George's loyalty, and resurrected the actor's postwar career as a character presence in two of his 'Cavalry' epics, Fort Apache (1948) and She Wore a Yellow Ribbon (1949).

O'Brien's performance in Beneath may be wooden, but compared to leading lady Marion Lessing he's practically Olivier. Lessing's acting style in the film rarely ventures beyond histrionics (the sequence in which she threatens Kingsley that her brother will emerge the victor is particularly painful to watch), and because their ill-fated romance is so central to the picture their scenes are embarrassingly awkward. Lessing had a few credited roles (Downstairs) after this film but those were overshadowed by a slew of uncredited parts, and it's not too hard to see why. (Actress Marguerite Churchill had originally been cast in the role of Anna Marie, but she opted for another film instead.)

The Seas Beneath is an interesting film to watch because Ford disciples will get a kick out of seeing some of his trademark tropes, like using comic relief to lighten up serious moments (represented by character great Warren Hymer, who's also in Men Without Women) and the indispensable camaraderie between the men in the line of duty (there's an Irish character, Mike 'Guns' Costello, who would have been letter-perfect for Victor McLaglen). Despite its slow spots and unconvincing romance, there is a great deal of taut action in Beneath (the final confrontation between the Mystery Ship and the U-172 is well-done) and the on-location shooting (the Navy gave Pappy carte blanche with regards to vessels and personnel) is also first-rate. Seas Beneath was originally released as part of Fox Home Video's 2007 Ford at Fox collection, but was made available as a stand-alone manufactured-on-demand disc in October of 2015.