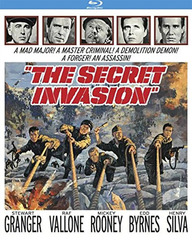 Where's That Been? - The Secret Invasion

The year is 1943 and the place is Cairo: British Intelligence officer Major Richard Mace (Stewart Granger) is assembling a crack team for a suicide mission in Dubrovnik, Yugoslavia. The aggregation he's put together is an unusual one, consisting of convicted felons: IRA demolitions expert Terence Scanlon (Mickey Rooney), forger Simon Fell (Edd Byrnes), thief and master of disguise Jean Saval (William Campbell), ruthless assassin John Durrell (Henry Silva) and criminal mastermind Roberto Rocca (Raf Vallone). The five men won't learn the particulars of their task until they arrive at their destination...but they have been informed that upon completion of the mission, they will receive full pardons for their crimes.

In Dubrovnik, Mace and his team meet their contact -- a man named Marko (Peter Coe), who heads up the Yugoslav Resistance, commonly referred to as 'Partisans.' Mace and Company will need to spring General Quadri (Enzo Fiermonte) from a formidable fortress located in Dubrovnik; Quadri has been imprisoned there by the Nazi command, and with his escape he can lead his Italian troops against the German army. The plan is to excavate a tunnel into the prison to spirit Quadri to freedom, but complications set in when a Partisan contact named Petar (Craig March) is captured by the Nazis, and he tells them what they want to know after being tortured. Since the plan hinges on getting into the prison anyway, Mace and the others decide not to put up a fight and allow themselves to be caught; they'll figure out the rest inside.

A story in which convicts are given a chance at redemption by performing heroically in an against-all-odds mission is undoubtedly a familiar one to classic movie fans: it's pretty much the summation of Robert Aldrich's box office smash The Dirty Dozen (1967). But the movie I described in the first two paragraphs was actually released three years before Dozen; an independent feature known as The Secret Invasion (1964), and directed by none other than 'the Pope of Pop Cinema,' Roger Corman.

Corman has been directing and producing films for over sixty years, and sadly, he doesn't often get the recognition he deserves (though this was finally rectified in 2009 to my satisfaction when Rog received an honorary Oscar). Roger was a major force in the field of independent filmmaking, demonstrating that economically-produced features could clean up at the box office (Corman's output pretty much kept drive-ins alive during the fifties, sixties and seventies) and acting as mentor to future actors and directors such as Jack Nicholson, Francis Ford Coppola and Martin Scorsese. Corman's company, New World Pictures, also introduced movie audiences to critically-acclaimed foreign films by the likes of Ingmar Bergman and Akira Kurosawa, securing the rights to distribute those movies in the United States.

As for Secret Invasion, Corman came up with the genesis of this movie while rifling through a National Geographic in the waiting room of his dentist, and once in the chair, he ruminated on the idea for a film set in WW2 Dubrovnik to take his mind off the pain. He wrote up a treatment for the film (the original concept was that the team of convicts were assigned to liberate an atomic scientist) and submitted it to David V. Picker, head of production at United Artists, on a Friday, expecting to hear back sometime in the next few weeks (or even months). Corman was gobsmacked to hear back from Picker the following Monday: United Artists was anxious to make the picture, and greenlighted 00,000 for the film -- the largest budget Roger had ever worked with at the time. (Rog, who some wag once joshed was the 'Ernie Banks of cinema' -- 'Let's make two!' -- used some of that money for pre-production between two of his celebrated Edgar Allan Poe adaptations, The Masque of the Red Death [1964] and The Tomb of Ligeia [1965].)

According to Roger Corman, his brother Gene was 'the best producer I ever worked with,' which sounds a little nepotistic, to be sure -- but Roger assigned brother Gene to produce Secret Invasion, and the job of writing the script went to R. [Bob] Wright Campbell, who had previously supplied the screenplay for the Corman-directed (and produced) The Young Racers (1963). Campbell's contribution was originally titled 'The Dubious Patriots,' but United Artists liked the eventual moniker of 'The Secret Invasion' better. With the little extra jingle in his pocket to make Invasion, Roger also hired on veteran MGM cinematographer Arthur E. Arling (The Yearling, Love Me or Leave Me) to give the movie a professional-looking sheen.

Another Leo the Lion refugee engaged by Corman was Stewart Granger, who had recently left Metro-Goldwyn-Mayer -- though Granger was a little shell-shocked at appearing in a film with a lower budget than the ones in which he had previously starred. Roger was also fond of the film work of Italian actor Raf Vallone (El Cid, Phaedra), and believed that not only was an Irishman like Mickey Rooney right for the part of Scanlon, but Mick would add a touch of comic relief as well. The others in the cast -- Henry Silva, Edd Byrnes and Bill Campbell -- had all worked previously with Corman, and he could trust them to do good. What he couldn't trust them to do was to keep their egos in check, notably in the case of Granger and Byrnes (who was a small screen star from his role as 'Kookie' on 77 Sunset Strip): both men quarreled over which of them would recite a line in a crucial sequence shot on a patrol boat, threatening to walk off the picture. Byrnes won the battle in that instance, and Roger wasn't too worried about Granger making good on his threat ('He couldn't walk off the boat and he certainly couldn't walk out of Yugoslavia') but he later categorized the incident in his autobiography (How I Made a Hundred Movies in Hollywood and Never Lost a Dime) as 'probably the worst experience I've had on a set in my entire career.'

Other than having to massage star egos, the shooting on Secret Invasion went fairly smooth; Corman relates in an interview on the film's Blu-ray release that he had to hang the Nazi flag over the Dubrovnik city hall for one sequence, and the townspeople got a bit upset about that (his production manager advised him to get his shot as quickly as possible). If it looks as if the Partisan army is a bit thin on manpower and military might, that's because Corman hadn't counted on an earthquake erupting while filming, which necessitated that some of the promised men and materiel be reassigned for rescue and recovery. Secret Invasion is an excellent example of how a film can succeed despite the need for 'guerrilla' moviemaking; though the movie is hurt by deficiencies in character development (only Silva's Durrell manages to triumph over caricature in a harrowing sequence involving the infant child of resistance fighter Mia Massini), the tautly-directed suspense scenes and first-rate action more than make up for it.

Audiences and critics loved The Secret Invasion, and apocryphal stories abound that the filmmakers behind The Dirty Dozen actually postponed production of that feature because of the similarities in storylines (Corman himself has admitted that Invasion bears a strong resemblance to a western he made earlier in his career, Five Guns West [1955]). Despite the audience love and critical appraisals, United Artists used a few accounting tricks to try and convince Roger the movie wasn't breaking even. Corman threatened to bring in auditors, so UA gave him 00,000 (hush money, I expect) on the condition that the director sign off on all rights and that he and the studio were free and clear. Giving Roger Corman that amount of money might have been a trial for United Artists, but it was a positive boon for movie fans, because you know Rog took that cash and made more features with it. My favorite remark about one of my beloved filmmakers goes as follows: 'Corman could negotiate the production of a film on a pay phone, shoot the film in the booth, and finance it with the money in the change slot.'