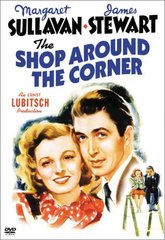 Drop In at The Shop Around the Corner

It's the time of year to gather with family and friends to celebrate the holidays. For those of us who love classic movies, it's also a special time to pull our favorite titles off the shelf as part of our holiday celebrations.

It seems to me Christmas movies often have a special, indefinable glow. I suspect this is partly because they've become part of our heightened memories of happy times enjoyed during the Christmas season and evoke warm, positive feelings. It also doesn't hurt that many Christmas films are simply exceptionally good movies, and one of the very best is The Shop Around the Corner (1940).

The property has proven exceptionally durable, eventually becoming the Broadway musical She Loves Me in 1963; She Loves Me was filmed for TV in 1978, and a revival opens on Broadway in March 2016, starring Zachary Levi and Laura Benanti. And let's not forget it was also the basis for the modern classic You've Got Mail (1998), starring Tom Hanks and Meg Ryan.

The now-familiar plot concerns Alfred Kralik (James Stewart) and Klara Novak (Margaret Sullavan), who work at Matuschek's store. They bicker incessantly, not knowing that when they go home at night to write letters to an anonymous pen-pal, 'Dear Friend,' they're actually writing to each other.

Alfred eventually realizes the truth, which causes a sea change in his opinion of Klara, and as Christmas approaches he must find a way to give their relationship a fresh start and ultimately tell her the truth...leading to a magical Christmas Eve.

Except for scenes in a restaurant and Klara's bedroom, the entire movie is set at the shop, which lends the feel that the movie creates a cozy little world of its own in Matuschek's; as Mr. Matuschek says, the store is where he spends most of his life, and the staff is family.

James Stewart was never better than in The Shop Around the Corner, as a world of emotions plays clearly across his face, with every line reading perfection. The moment on Christmas Eve when he seriously tells Klara he's certain she'll return to the store after Christmas engaged to be married is thrilling, just because of the way he says it. I'd go as far as to say the Academy should have awarded Stewart the Oscar for this film, rather than his role later that year in The Philadelphia Story (1940).

He's matched step for step by Sullavan, who makes dreamy Klara likeable despite her constant sparring with Alfred; indeed, they have such excellent chemistry it's surprising they don't realize earlier that their bickering masks a compelling attraction. Her reactions near the end of the film are delightfully funny. Sullavan had previously costarred with Stewart in The Shopworn Angel (1938), and they would costar in a second film in 1940, The Mortal Storm.

Frank Morgan did superb work in a number of films at MGM, most notably, of course, the prior year's The Wizard of Oz (1939), and he's quietly heartbreaking as a man hiding the fact that his life is falling apart, while erroneously taking it out on Alfred.

This is my favorite performance by Felix Bressart, who combines tenderness with a puckish sense of humor as Pirovitch; he scurries out of the way whenever Matuschek starts asking for opinions, but he never hesitates to step in to help his friend Alfred, whether Alfred needs the night off or wants a wallet for Christmas instead of a musical cigarette box. The moment where he sticks his head in the office and announces to Alfred he'll be getting the wallet he wants is one of my favorite moments in the movie. He's delightful.

Although she doesn't have much screen time, Sara Haden (Aunt Milly from the Andy Hardy series) has an appealing serenity as one of the more senior clerks. Inez Courtney's role as Illona is considerably smaller than it is in the musical She Loves Me, but it must be admitted that that helps keep the movie at a brisk 99-minute running time.

Director Lubitsch keeps the film moving along with a lighter-than-air touch; the importance of director and screenwriter are especially apparent when comparing the film to the remake In the Good Old Summertime; the later film is pleasant but also heavier and clunkier than the perfectly paced original.

It had been some time since I last watched The Shop Around the Corner, and revisiting it was like becoming reacquainted with dear friends. I resolved not to let so much time pass before I watch it again! Why not make this charming film a part of your holiday viewing this year?