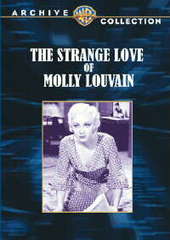 Where's That Been? - The Strange Love of Molly Louvain

It's the age-old question of nature vs. nurture: is bad behavior inherent in individuals or something that is learned as a consequence of one's environment? The test subject for this theory is Madeleine Maude Louvain (Ann Dvorak) -- 'Molly' to her friends -- a woman who works a cigar counter in a small town hotel. Molly's mother abandoned her when she was seven years old, and Molly is determined not to go down the same path -- she's got a good job, and a promising relationship with wealthy Ralph Rogers (Donald Dillaway). Ralph and his mother are even hosting a party in Molly's honor the same evening the young couple have spent an idyllic day together in the country.

Ralph, sad to say, turns out to be a bit of a rotter. He and Mumsy run off to Europe, and in a rather daring bit of subject matter for the pre-Code era, he's left Molly great with child. Jimmy Cook (Richard Cromwell), a bellhop at the hotel who's very much sweet on Molly, tries to dissuade her from taking up with skeevy salesman Nick Grant (Leslie Fenton), but his pleas fall on deaf ears. Grant is little more than a penny ante thief, and concern for her three-year-old daughter Ann Marie (Jackie Lyn Dufton) leads Molly to put her in the secure care of Mrs. Schiller (Claire McDowell), a woman with quite a few children of her own. Molly then makes plans to get free of Nick; her fortunes begin looking up when she crosses paths with Jimmy again while working at a dance hall. Jimmy is now studying at the local university, determined to make good.

As Molly and Jimmy prepare to go someplace quiet to reminisce, Nick makes himself most unwelcome in their company; he has them file into an automobile that Molly and Jimmy later learn is stolen. To avoid capture by the police, Nick has Molly drive off in his purloined ride while he shoots it out with the gendarmes. He's wounded in the melee, and now both Molly and Jimmy are fugitives; the police are convinced the two of them are members of Nick's 'gang.'

A rented apartment provides a brief place of respite for Molly and Jimmy, and it's there they make the acquaintance of fast-talking reporter Scottie Cornell (Lee Tracy). While the common sense Jimmy tries to convince Molly the two of them are guilty of nothing and that they can straighten everything out with the police, the more cynical Scottie tells the couple he plans to break the story of the two fugitives, unaware that Molly is the woman he seeks (and flirting shamelessly with her all the while). Molly cannot deny her attraction to Scottie and gives Jimmy the brush-off, while tearfully realizing she has become like her mother (because she'll have to leave Ann Marie with her new family so she can be with Scottie). 'Now I understand why she ran away with her man and left me,' Molly confesses to Jimmy. 'I don't hate her. She couldn't help it...and neither...neither can I.'

After a brief career as a child star in silent films (her mother was actress Anna Lehr, and Dvorak was occasionally billed as 'Baby Anna Lehr') and then numerous appearances in movies as a chorus girl (Free and Easy, Dance, Fools, Dance), Ann Dvorak received rave notices for her role as Cesca Camonte, the frisky sister of the titular gangster (Paul Muni) known as Scarface (1932). Ann was quite busy that year, appearing in such films as The Crowd Roars and Three on a Match, and The Strange Love of Molly Louvain (1932) provides her with one of her most interesting acting roles. I make no secret of the fact that I am a big fan of Dvorak's, whose career on the silver screen was somewhat curtailed by inadequate scripts and unrewarding roles (she also eloped with her Louvain co-star Fenton that same year and went off on a whirlwind honeymoon resulting in punitive enmity from Warner Brothers). Still, I believe Ann lights up any movie she's in: I've enjoyed her in the likes of Heat Lightning (1934), 'G' Men (1935), Dr. Socrates (1935), The Private Affairs of Bel Ami (1947), The Long Night (1947) and The Secret of Convict Lake (1951). (I also have a soft spot for 1935's Thanks a Million, in which she gets to sing-and-dance with partner Patsy Kelly.)

The Strange Love of Molly Louvain is an odd little picture. It starts off as your typical pre-Code crime mellerdrammer (with the controversial pregnancy angle), but with the introduction of Lee Tracy, it veers off into The Front Page / His Girl Friday territory. Don't get me wrong: I like Tracy, who would go on to bigger triumphs that same year in The Half-Naked Truth (1932) and the picture that put him on the map, Blessed Event (1932). But his character kind of throws the movie out of whack: not enough to hurt the finished product, but just enough to make you disappointed with the wrap-up. His romance with Dvorak's character is never really believable (though the flirtation is fun), and the direction Molly Louvain takes in sending Jimmy packing seems kind of a cruel thing to do to a guy whose only failing was a desire to make her happy. (I guess the late, great Bill Hicks was right: chicks dig jerks.)

Director Michael Curtiz was in charge of this brisk programmer adapted by Erwin S. Gelsey and Brown Holmes from the play Tinsel Girl by Maurine Watkins (Watkins also wrote the play Chicago, which first went before the motion picture cameras in 1927). Of course, because it is a Warner Bros. film, Guy Kibbee and Frank McHugh have to be in it (Guy plays a policeman named 'Pop'; Frank is one of Tracy's fellow members from the Fourth Estate), but there are also nice contributions from Charles 'Ming the Merciless' Middleton and Louise Beavers (as a washroom attendant in a scene where Dvorak goes platinum in order to avoid being recognized by the law). I also giggled when I spotted silent funsters 'Snub' Pollard (as a bill collector) and Hank Mann (another reporter). Despite a disappointing denouement, The Strange Love of Molly Louvain is indisputably entertaining. Ann and Lee would work together again only once more in that same year's Love is a Racket, then she went on her honeymoon and Tracy found greener pastures at MGM.