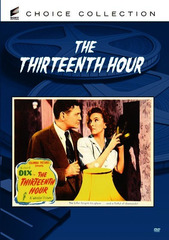 Where's That Been? - The Thirteenth Hour

From 1942 to 1955, an omnipresent narrator known to audiences as 'The Whistler' was the host of one of the West Coast's most highly-rated mystery radio programs. The announcer for The Whistler even bragged that the series was 'rated tops in popularity for a longer period of time than any other West Coast program.' If you lived on the West Coast back then, or within driving distance of a Signal Oil station -- the program's long-running sponsor -- chances are that you, too, were a fan of the program; except for two runs in 1946 and 1947-48, The Whistler was heard mostly as a Pacific exclusive.

For a radio show with such a select audience, The Whistler's popularity was such that Columbia Pictures was inspired to institute a series of B-picture mysteries based on the program: eight films were released from 1944 to 1948, beginning with the appropriately titled The Whistler (1944). Seven of those titles were released (beginning in May of 2015) as part of Sony Home Video's MOD Choice Collection -- the only MIA title is The Mark of the Whistler (1944), which is a shame since it's one of the very best entries, based on a story by Cornell Woolrich ('Dormant Account') -- whose novels and short stories were often adapted for movies such as Phantom Lady (1944) and The Window (1949).

Mark appears to not even have made the rounds at Turner Classic Movies, which showcases the Whistler movies on occasion (it was shown on Encore's Mystery Channel in the 1990s, because that's where I secured my copy).

Even rarer than The Mark of the Whistler was The Thirteenth Hour (1947) -- the penultimate film in the Whistler franchise. It's a rarity no more, however; Sony's Choice Collection saw the release of Hour to MOD in July of 2015 (Hour hasn't turned up in the TCM package, either).

Richard Dix stars as Steve Reynolds, the owner of a small trucking company who's celebrating the birthday of his girlfriend, Eileen Blair (Karen Morley), along with his fellow logjammers after The Whistler finishes his introductory remarks ('I know the nameless terrors of which they dare not speak!').

Steve has a special gift for his lady love: an engagement ring, a symbol of the hard-fought battle he waged against his rival -- motorcycle cop Don Parker (Regis Toomey) -- for Eileen's intentions.

Parker swears to Steve there's no hard feelings even though Reynolds emerged the victor in courting Eileen. But this isn't going to stop the cop from slapping Steve down with a citation after Reynolds is involved in an accident involving his vehicle and the broadside of a gas station (which Steve slammed into to avoid hitting an automobile on his side of the road). Steve had a drink at Eileen's, sure, but Don is a stickler for the rules: imbibing while operating a heavy vehicle is verboten. A hitchhiker (Anthony Warde) Steve picked up shortly before the incident beats a hasty retreat, so he has no witnesses to support his side of the story.

As such, the traffic court judge (Selmer Jackson) is prepared to throw the book at Steve, but since Steve arranged to make restitution to the owner of the gas station (admittedly, it was to ward off any potential stickiness with his insurance premiums), His Honor suspends the six-month jail sentence: the only stipulation is Steve's driving license will be revoked for the period of probation. Out of commission as far as transporting freight is concerned, Steve is forced to hire another driver...but when that driver takes ill, Steve will have to get behind the wheel in order to insure a load of produce gets to its intended destination before it rots.

Determined to drive at night and making an effort to stay off the main highway (so Parker doesn't catch him), all seems to be going smoothly for Steve until he experiences engine trouble; when he gets out of the truck to investigate, a figure emerges from the back and introduces Steve's head to the business end of a heavy wrench. Adding insult to injury, the figure hijacks the truck (with Steve on the passenger side of the cab) and heads toward the highway and Don Parker. Parker is killed when the mystery man backs up over him, and if Steve thought the judge was going to be skeptical about his drunk driving incident, he's really going to have difficulty selling this bill of goods.

From 1929 to 1943, actor Richard Dix was a popular leading man at R-K-O, where he graced such classic favorites as Cimarron (1931) and The Ghost Ship (1943). The Thirteenth Hour would be Dix's cinematic swan song -- in fact, the first seven Whistler films constituted Richard's final silver screen appearances before his passing in 1949 -- and like his previous Whistler performances, he does a superb job as a man caught in a web of circumstance not unlike your standard noir hero.

'You didn't kill him, Steve,' The Whistler assures us on the soundtrack, 'but will anyone believe you?' Dix's Reynolds has a tough road ahead of him (apologies for the pun) with regards to proving his innocence: the only clues to the murder are a motorman's glove and a man with a missing thumb.

One of the suspects in Hour is Jerry Mason (Jim Bannon), a disreputable businessman who's vowed to destroy Steve's business (Reynolds is his competitor, and beating his prices). Bannon, whose career in radio included handling the announcing chores on such shows as The Great Gildersleeve (a show on which his one-time wife, Bea Benaderet, also performed) and The Adventures of Nero Wolfe, had just finished at Columbia a short-lived movie series based on radio's popular I Love a Mystery (his co-star was one of the radio actors, Barton Yarborough). Jim later worked a stint as 'Red Ryder' when Eagle-Lion took over the western franchise from Republic, and starred on TV's The Adventures of Champion, which featured Gene Autry's famous movie horse.

The Thirteenth Hour also showcases one of my favorite actresses, Karen Morley, in one of her final forays on the silver screen before being blacklisted for her political affiliations. Morley appeared in such 1930s classics as Scarface (1932; as Poppy, Tony Camonte's moll) and Dinner at Eight (1933) but she would curtail her movie career somewhat in 1934 after skirmishing with MGM over her choice of roles and her private life in general.

Morley became a freelancer after that, making an impression in such vehicles as Black Fury (1935) and Pride and Prejudice (1940).

Morley's turn as Eileen is a good one (if a bit thankless); it goes without saying the strength of these wonderful Columbia programmers is the splendid support from such great character veterans as Regis Toomey, Anthony Warde, Ernie Adams, and Cliff Clark (you've seen him as 'Inspector Donovan' in The Falcon movies, and yes, he plays the top cop here).

The weakness of The Thirteenth Hour is the killer's identity becomes fairly apparent at the halfway mark, but the film remains a worthwhile one, if only to see how integral Richard Dix's participation was to the overall Whistler series. (He was replaced by Michael Duane in the final entry, 1948's The Return of the Whistler, which is inarguably the weakest movie in the franchise.) Underrated throughout his career, Dix had a quality about him that made him the perfect protagonist for this first-rate series of programmers as a nervous man who's constantly looking around furtively to see just where Fate plans to trip him up.