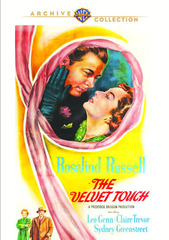 Where's That Been? - The Velvet Touch

Valerie Stanton (Rosalind Russell) is the toast of Broadway: she's a popular light-comedy actress who's achieved her success largely as a result of her long association with uberproducer Gordon Dunning (Leon Ames). But Valerie is game for more of an acting challenge -- she's interested in playing the titular heroine of Ibsen's Hedda Gabler, which means her collaboration with Dunning will have to come to an end.

Gordon is not pleased with Val's new career direction; he realizes his theatrical accomplishments are due in large part to Stanton's talents and he has long held romantic designs on his star (there's a broad hint the two of them were 'an item in the columns' at one time).

Because the Stanton-Dunning relationship is the very definition of symbiosis, Gordon is determined to maintain the status quo: during a meeting in his office on the closing night of their latest play, he threatens to expose her 'ugly past' (the majority of it being creative fiction) to her fiance Michael Morrell (Leo Genn) and at one point during their heated argument Dunning does not behave like a gentleman, instead grabbing her roughly, prompting Valerie to brain him with a statuette, thus killing him.

Valerie flees the scene of the crime, leaving rival actress Marian Webster (Claire Trevor) to discover Gordon's corpse. (Marian has long been carrying a torch for Dunning, and the sight of his lifeless body on the floor of his office sends her in a state of shock.)

Will Valerie escape the consequences of her actions even though Gordon Dunning was a cad? Well, she's going to have to rely on all of her acting tricks to fool the wily Captain Danbury (Sydney Greenstreet), who's been brought in to investigate the murder, and Danbury's number one suspect is the innocent Marian.

The Velvet Touch (1948), released to DVD from the Warner Archive, is obviously not a whodunit (mostly because I told you who the guilty party was in the second paragraph) but more of a 'howz-he-catch-'em:' the movie pits the cultured Danbury (a gourmand and devotee of the theatre) against the guilty Stanton, who starts to unravel a bit during the investigation.

To Valerie's credit, she attempts on several occasions to come clean: she describes to the police captain how it would have been possible for her to have committed the murder (practically a confession) but Danbury dismisses it immediately, arguing she has no motive. So it's not a clear case of Valerie merely sitting back, smugly celebrating getting away with homicide. This is why a scene where she confronts the recuperating Marian in her hospital room doesn't entirely ring true; Marian accuses her of being 'rotten all the way through' when it's more a case of Val being too paralyzed by fear to reveal her complicity in the crime.

The Velvet Touch isn't a great movie -- it has more than its share of weaknesses keeping it from being an exceptional film noir. (More than a few critics have suggested calling it 'noir' is most generous, seeing as how the sole qualification for such in the film is Dunning's murder.)

Let me begin with the leading men in Valerie's life: neither Leon Ames (The Postman Always Rings Twice) nor Leo Genn (The Snake Pit) are particularly compelling screen presences (my best classic movie friend joked both actors were 'being their George Brent-iest' in this one) and Russell's romance with Genn's character might have been more convincing had it not occurred in a time span of three days (I realize things move quickly in the movies, but still). It took me a while to warm to Roz's characterization of Stanton (you know, the exaggerated stage diva type, always calling people 'dahling') -- which is interesting when you stop to consider Russell's Broadway roots before achieving movie fame as a superb comic actress who always had a snappy rejoinder in her holster.

Velvet Touch was a Rosalind Russell family affair, the first and only production of Independent Artists (Touch was distributed by R-K-O), a company formed by Russell and her producer husband Frederick Brisson. Roz and Freddie handed the directorial reins over to first-timer Jack Gage (who served as the dialogue director on Russell's Sister Kenny and Mourning Becomes Electra), and he performs a competent job despite an overemphasis on the theatricality of the proceedings (this sort of hurts the film's noir bona fides by limiting the building of tension and suspense).

Considering the solid noir credentials of scribe Leo Rosten -- who also penned Sleep, My Love (1948) and contributed the story for The Dark Corner (1946) -- the 'staginess' of Touch wastes an opportunity to do a really superb examination of Stanton's psychological torment as a result of her crime.

The Velvet Touch gets a boost from an impressive supporting cast: I'm going to show a good bit of bias here, but I believe Claire Trevor gives a nice performance as the jilted Marian (what can I say -- she's a favorite), and I was relieved to learn I'm not the only one who was fooled for a few seconds by Dan Tobin's channeling of the cad-like Zachary Scott in his character of snide columnist Jeff Trent (honest to my grandma, I thought it was Scott until I realized I hadn't seen his name in the credits).

There are also fine turns from Esther Howard (as a streetwise newspaper vendor) and Theresa Harris (as Val's devoted domestic), not to mention the ubiquitous Frank McHugh (didn't Warners have anything for him at the time?) and favorites like Russell Hicks, Irving Bacon and Nydia Westman.

And Velvet Touch really doesn't come to life until the halfway mark, when Sydney Greenstreet makes his entrance as Captain Danbury -- the suspects in Dunning's murder are all assembled on stage in his theatre, and Danbury gingerly sits down in a nearby wooden chair, hoping it will support his impressive bulk. After a creak or two, Danbury is satisfied he will not go crashing to the floor...and Greenstreet gives out that trademark hearty laugh of his as a result. Sydney didn't get the opportunity to play many heroic roles (he always excelled as a first-class villain) so it's engaging that he acquits himself nicely in one of his final onscreen appearances.

As for star Rosalind Russell, The Velvet Touch did boffo box office, but like the character of Valerie Stanton, Roz longed for roles outside her wheelhouse and she eventually satisfied herself with a return to the stage, though she would continue to make favorable impressions in vehicles like Picnic (1955) and, of course, Auntie Mame (1958). If you're a fan of films that show the soft white underbelly of the the-a-tah (A Double Life, All About Eve), The Velvet Touch will definitely be your meat.