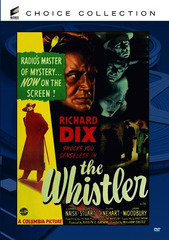 Where's That Been? - The Whistler

Previously here at 'Where's That Been?' I reviewed The Power of the Whistler (1945), one of eight films in Columbia Pictures' 'Whistler' franchise based on the popular radio series The Whistler, broadcast over CBS West Coast Radio from 1942 to 1955. Sony Pictures, through their manufactured-on-demand Choice Collection, has been releasing the Whistler movies on DVD since May of 2015, and as of this writing, seven of the eight programmers are available for a new generation of fans to enjoy (the lone hold-out is the second film in the series, The Mark of the Whistler [1944]).

At the risk of severe arm injury from patting myself on the back, I like to think I played a small role in Sony's decision to bring these nifty little B-picture mysteries to home video. (Please hold your applause until the end of the review.) I'm only being slightly facetious about this: back in August of 2012, shortly before The Greatest Cable Channel Known to Mankind (my affectionate nickname for TCM) scheduled some of the Whistler features, I wrote a series of reviews of the films to be shown as author of the Radio Spirits blog. Granted, I know correlation does not imply causation but is there another rational explanation for Sony's choice to liberate the Whistler films from their musty vaults? (If there is, please don't shout it out in front of the others.)

Fittingly, the first of the Whistler films to be introduced on DVD is The Whistler (1944), which finds a man (Richard Dix) named Earl C. Conrad arranging a meeting at a waterfront dive with underworld criminal Lefty Vigran (Don Costello). Conrad pays Lefty a hefty 0,000 to assassinate an acquaintance, and the killing will be carried out by a confederate of Vigran's. The victim? None other than Earl C. Conrad.

You read that right. Conrad, a prominent businessman who owns a ceramics company, is despondent over the drowning of his wife in a shipwreck and wants to end it all. After his meeting adjourns, Vigran gives a deaf-mute (William 'Billy' Benedict) ,000 to hand off to the hit man, identified only as 'Smith' (J. Carrol Naish). Alas, poor Lefty won't get to spend his half of the money; he's gunned down by two police detectives as he leaves the cafe.

This turn of events probably wouldn't be so bad -- it eliminates a paper trail and all -- but Conrad soon receives word that his wife is very much alive, and has been rescued from imprisonment (by the Japanese -- there's a war on, you know) by the International Red Cross. She will return to the States on the next repatriation ship...but if Earl doesn't learn the identity of his assassin (a secret that died along with Lefty) there's a chance he may not be greeting her when it arrives.

Before he cemented his cinematic immortality as the director of gimmicky horror films like House on Haunted Hill (1958) and The Tingler (1959), William Castle honed his craft on a number of B-pictures cranked out by Columbia, where he had originally been hired as a dialogue director. The studio gave him a big break by allowing him to hold the reins on one of their 'Boston Blackie' films, The Chance of a Lifetime (1943), and despite the feature's tepid critical reaction and poor box office Columbia saw a great deal of promise in Castle, so they handed him this Whistler assignment with a budget of 5,000. Castle's first-rate direction (utilizing low-key lighting and wide-angle lenses to create a tense, claustrophobic feeling) would greenlight his participation in three other films in the series: The Mark of the Whistler, Voice of the Whistler (1946) and Mysterious Intruder (1946).

Columbia was no doubt impressed at how Castle worked magic with Whistler star Richard Dix, who demonstrated he was capable of solid acting outside of his hit films of the 1930s like The Public Defender (1931) and Roar of the Dragon (1932). The director insisted Dick drop a few pounds, and then coaxed a fine performance from his star despite the series' B-picture pedigree. 'When I finally used him [Dix] in a scene, I'd make him do it over and over again until he was ready to explode,' Castle remembered years later. 'It achieved the desired effect -- that of a man haunted by fear and trying to keep from being murdered.'

Dix's haunting turn as Earl C. Conrad would become a hallmark of the Whistler series since the actor appeared in seven of the eight programmers (the final feature, The Return of the Whistler, starred Michael Duane), alternating as hero and villain. But he gets an assist in this first Whistler entry from J. Carrol Naish, who infuses the role of the hit man with a bit more nuance and subtlety than would be the norm for a movie of this type. Naish was one of the movies' premiere character actors, garnering two Best Supporting Actor Oscar nominations (Sahara, A Medal for Benny) and demonstrating a range that allowed him to play anything from Italian immigrants (on the popular radio sitcom Life with Luigi) to Asian detectives (he was the star of TV's The New Adventures of Charlie Chan).

Also in the cast of The Whistler is Gloria Stuart (as Dix's loyal secretary), who would also become an Oscar nominee (but many years in the future, as old Rose in 1997's Titanic) -- at the time of this movie, she was better known for roles in The Old Dark House (1932) and The Invisible Man (1933). If you're a fan of the Bowery Boys like I am, you might find it difficult suppressing a chuckle seeing Billy 'Whitey' Benedict in a malevolent role as the deaf-mute East Side Kid who helps to put the murder plot in motion.

Supplementing the fine cast are such old pros as Alan Dinehart, Trevor Bardette, Byron Foulger, Robert Emmett Keane, Cy Kendall, and Joan Woodbury -- and Otto Forrest acquits himself nicely as the voice of the omnipresent Whistler (several of the characters even comment in one scene that they can hear him whistling Wilbur Hatch's memorable theme -- something done in earlier episodes of the radio show before gradually phasing out The Whistler's active participation).