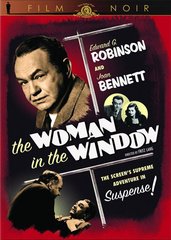 Teen Scene: The Woman in the Window

The work of author-director Fritz Lang has an established notoriety among cinephiles, particularly for his innovative masterpieces, Metropolis and M. One most not forget that the German director also had an important career in the United States in the '40s and '50s, and his American films are now considered Hollywood classics, among them his collaborations with Joan Bennett. These films show Bennett in different kinds of essences, but they all complete each other. Where does a beginner start? The Woman in the Window is a good option, with all the perfect ingredients of their collaborations added into a film noir aesthetic and starring two other Lang actors: Edward G. Robinson and Dan Duryea.

The Woman in the Window was released in 1944, based on the novel Once off Guard by J. H. Wallis. The main character is criminology professor Richard Wanley (Robinson) who has always been fascinated by the portrait of a beautiful young lady exposed in a storefront window. One evening, after spending time with his friends at the club, he goes to observe the portrait again and is surprised by the lady herself (Joan Bennett). They have a drink and the lady, whose name is Alice Reed, takes him to her home to show him other sketches by the painter who made her portrait.

While they are casually talking, Alice's rich lover, known by her as Frank Howard (Arthur Loft), interrupts and is not happy to see her in the company of another man. Blind with jealousy, he fights with Wanley and in self-defense Wanley kills Howard with a pair of scissors. Instead of calling the police, Richard decides to hide the body in a forest. He and Alice make sure no detail is left to let the police. The following day, Richard's friend district attorney Frank Lalor (Raymond Massey) shares with him information about the mysterious disappearance of a rich man by the name of Claude Mazard. Richard quickly makes the connection and understands that Claude Mazard and Frank Howard are the same person. The body is soon found by a boy scout and the investigation begins. The two 'partners in crimes', Richard and Alice, have to hold their breath and face this problematic situation the best they can.

The Woman in the Window has one of the most mysterious and beautiful character entrances in classic film history. While Richard observes Alice Reed's portrait, her face slowly begins to appear in the window's reflection, mesmerizing Richard and the audience. Joan Bennett has this mysterious dark look (and voice) that make her perfectly suitable for Fritz Lang's noirs. We never truly say if Alice Reed is good or bad, and this ambiguity is created by the enigmatic aura around her. She can choose whether to remain Richard's partner in crime or let him down.

After Alice's unforgettable entrance, she explains to Richard how she likes to observe people who admire her portrait:

Alice Reed: Well, there are two general reactions. One is a kind of solemn stare for the painting.

Richard Wanley: And the other?

Alice Reed: The other is a long, low whistle.

Richard Wanley: What was mine?

Alice Reed: I'm not sure. But I suspect that in another moment or two you might have given a long, low, solemn whistle.

Edward G. Robinson is shown in a different light compared to his roles in early gangster films. His role is similar to the one in Scarlet Street: an ordinary man involved in a lot of complications. This proves his versatility and that the man could play sensible characters. There is a lot of wisdom in Richard despite all that happens to him and he knows how to keep cool.

The work of cinematographer Milton R. Krasner on The Woman in the Window is worth praising. Creating interesting nightlife scenes is often expected of film noirs and this film isn't an exception. Joan Bennett and Edward G. Robinson perfectly fit in this ambiance. The interior and daytime scenes are filmed with a lot of class and create an interesting contrast between the darkness of the night and the clarity of day. Krasner also worked on Fritz Lang's Scarlet Street and many other notorious classics.

Fashion fans will also be delighted by the work of Muriel King, designer of Joan Bennett's gowns. All are faithful to the high society fashion of the '40s and, once again, add a lot of visual beauty to the film. King manages to accentuate Joan's beauty with both dark and light fabrics.

The Woman in the Window is a perfect film for those who love to see mysteries being solved. It remains fascinating, but also for the way the course of events themselves is developed. The spectator is kept at the edge of his seat from beginning till end. Fritz Lang was a master of noir, as he also proved with The Blue Gardenia in 1953 and Beyond a Reasonable Doubt in 1956.

All of Bennett and Lang's films are one of a kind and are all worth watching, but The Woman in the Window is a favorite. Will it be the case for you?