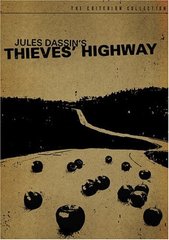 Where's That Been? - Thieves' Highway

Nico 'Nick' Garcos (Richard Conte) returns to his childhood home in Fresno, loaded down with gifts for his father Yanko (Morris Carnovsky), mother Parthena (Tamara Shayne), and fiancee Polly Faber (Barbara Lawrence). Nick's been at sea, working as a ship mechanic, and along with the presents he reveals he's earned 800, which he hopes to use to start a business with Polly's father. The occasion of his return is a gay affair until he presents Yanko with a pair of Mandarin slippers. That's when Nick learns his father tangled with crooked San Francisco produce merchant Mike Figlia (Lee J. Cobb), who refused to pay him for delivery of a truckload of tomatoes. As a result of his brush with Figlia, Yanko ended up in a truck accident that cost him both his legs.

Yanko sold his truck to wildcatter Ed Kinney (Millard Mitchell), who hasn't finished paying the senior Garcos for the transport, so he gets a visit from Nick, demanding the money. Kinney tells Nick he knows of an orchard where Golden Delicious apples have just been picked, and he plans to buy a load to take to Frisco, where Ed will make a killing. Nick then decides to throw in with Kinney by using the money he's saved to buy a surplus truck and an additional load of apples, even though he's wary about his new partner (Ed tries to cheat the immigrant couple selling the apples of three hundred dollars). But on the trek to the market, Nick is nearly killed when his truck falls on him as he's changing a blown-out tire -- fortunately, Ed comes to his rescue and the two men form a brotherly bond.

Arriving at the market, Nick meets up with Figlia who shows disinterest in Nick's apples, cannily thinking he'll be able to get the load at a reduced price. Nick's done his homework, however, and he's going to squeeze Figlia for every cent he can. Figlia arranges for one of his goons to take out one of the truck tires, then pays prostitute Rica (Valentina Cortese) fifty bucks to distract Nick so he can sell the apples 'on consignment.' Nick's initial investment of a dollar-a-box appears to have paid off: Figlia is able to get six-and-a-half bucks a box for the precious fruit. Getting paid for his apples will bring on an entirely different set of complications for Nick, however.

Before director Jules Dassin was forced to flee to Europe and make 'caper' films like Rififi (1954) and Topkapi (1964), he had established himself as a first-rate helmer of American film noirs, notably Brute Force (1947) and The Naked City (1948). Dassin made Thieves' Highway (1949) between Naked and his celebrated Night and the City (1950), and while more than a few critics have suggested Thieves' Highway isn't as 'noirish' as others in his oeuvre, it's long been one of my favorites. (Michael Sragow, author of an essay accompanying the Criterion release of Highway, believes it to be Dassin's 'best American movie,' noticing that 'it breathes the same air of risk and desperation as his made-in-Europe masterpieces' while displaying 'a rich sensuality all its own.')

Much of what makes Highway so superb is the script by A.I. Bezzerides, who adapted his own novel Thieves' Market, published in 1949. Bezzerides' first novel, The Long Haul (1938), was the basis of the 1940 Warner Bros. release They Drive By Night with George Raft, Ann Sheridan and Ida Lupino -- and in fact, both movies share a similarity in that they deal with the subject of wildcat truckers.

Bezzerides displayed a strong proletarian bent in many of his book and silver screen efforts (he penned 1942's Juke Girl, which features future President Ronald Reagan as a migrant farm worker attempting to start a union), and the attention to realism in Highway -- in its depiction of the grueling work done by truck drivers and the hectic atmosphere of the produce market, staffed with a melting pot of working immigrants -- is unquestionably one of the strengths of the film. Bezzerides also wrote the classic noirs On Dangerous Ground (1951) and Kiss Me Deadly (1955), and would go on to co-create TV's The Big Valley.

In the role of Nick, Richard Conte solidified his noir bona fides (Call Northside 777, House of Strangers) with an exceptional portrayal of a working-class stiff introduced to his darker self as a result of a wallow in the corruption represented by the amoral Mike Figlia. (Lee J. Cobb's portrayal of Figlia is quite reminiscent of the future work the actor does in On the Waterfront -- the marketplace in Highway is even located 'on the waterfront.') That corruption will be responsible for the loss of his father's legs, and the death of his partner Ed (a sensational turn by character great Mitchell), whose truck overturns and incinerates as Kinney is making his way to Frisco. In the course of the film, Nick loses his enduring naivety and also the interest of Polly, who fair-weatherly disappears the moment she learns her fiance has lost the nearly four thousand dollars he made in his deal with Figlia.

Nick gets a consolation prize in Rica, played by Italian actress Valentina Cortese in a most mesmerizing turn; the sensual chemistry between Cortese and Conte is positively electric, and although Valentina shone in other films like House on Telegraph Hill (1951) and The Barefoot Contessa (1954), she decided to return to Europe to continue her movie career. Cortese was nominated in 1975 for a Best Supporting Actress Oscar for her performance in Francois Truffaut's Day for Night (1973); a mortified Ingrid Bergman (who won for Murder on the Orient Express) tearfully apologized to Cortese for winning the Oscar she felt her rival deserved during her acceptance speech.

Of the supporting players, it's Jack Oakie who gives the standout performance as a trucker named 'Slob;' throughout the movie, he and fellow driver Pete (future director Joseph Pevney) act as a comic relief Greek chorus, but Oakie's Slob proves to be a 'right guy' and offers his services to Nick when the chips are down. Director Dassin says actor Oakie was stone deaf at the time Highway went before the cameras but that there were never any delays as a result of Jack's handicap. (In fact, there's even an in-joke in a line of dialogue spoken by Oakie to Mitchell: 'I don;t hear ya...I don't hear ya!')

I make no secret of my fondness for Highway even though I acknowledge its flaws and imperfections: the gravest injury to the film is its moralizing wrap-up (a cop lectures Conte about taking the law into his hands) which author Bezzerides had trouble with (I'll spare you his description since this is a family site). But A.I. also didn't like Dassin's casting of Cortese as Rica, and to me, this movie would be nothing without her (to use Bezzerides' phrase from Kiss Me Deadly) 'Va-va-voom!' Watch this one at your next opportunity.