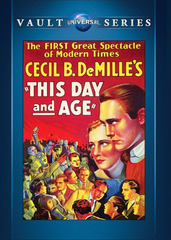 Where's That Been? - This Day and Age

It's 'Boys' Week' at North High School in Anytown, USA -- and for those of us who aren't quite sure what this entails, it's an annual scholastic event in which students are placed in charge of elected offices to assist them in their study of civics. For example: young Steve Smith (Richard Cromwell) will be the district attorney, with his chums Gus Ruffo (Oscar Rudolph) performing as judge and Billy Gordon (Michael Stuart) assuming duties as chief of police.

The boys will get a firsthand look at just how impotent the legal system can be when a Jewish tailor (Harry Green), a friend of theirs, is murdered by a racketeer named Louis Garrett (Charles Bickford); Garrett attempted to shake 'Herman' down into participating in his organization's protection racket, and when Herman refused, Garrett pumped a bit of lead into him. Garrett's mouthpiece (Warner Richmond) expertly defends his client on charges of murder by casting doubt on Steve's testimony (even though the youngster entered Herman's store seconds after Garrett shot and killed him), providing Louis a seemingly airtight alibi (a number of witnesses affirm Garrett never left the nightclub he runs as a front for his criminal activities).

On their own initiative, Gus, Billy and their friend Sam Weber (Lester Arnold) investigate the crime scene at the tailor's shop and locate a cufflink Garrett left at the scene. The three students then make their way to Garrett's nightclub, where Gus and Billy search the gangster's upstairs apartment (to find the cufflink's twin) as Sam plays lookout. Tipped off to their activity, Garrett and a few of his boys burst in while Gus and Billy's hunt is in progress; Garrett shoots and kills Billy, framing Gus for the deed. Since it looks as though the legal system is going to fail a second time in a Garrett-related matter -- the grand jury is looking to indict the innocent Gus -- Steve and Don Merrick (Eddie Nugent) conclude they'll have to take the law into their own hands.

Cecil B. DeMille was inarguably the most commercially successful producer-director in the history of cinema. He's the embodiment of how we envision motion picture directors; the martinet wearing breeches and puttees, barking instructions through a megaphone. Though DeMille dabbled in all sorts of genres, his specialty was the motion picture epic; during the silent movie era, Cecil's giant hits included such films as The Ten Commandments (1923; which he would remake as an even bigger epic in 1956) and The King of Kings (1927). DeMille learned early on that the easiest way around Hollywood censors and bluenoses was a combination of 'sin-and-salvation:' he could focus on as much sin in his movies as he liked as long as redemption came out for a curtain bow by the end.

By the time the talkies were ushered in, DeMille continued his epic tradition with such vehicles as The Sign of the Cross (1932), Cleopatra (1934) and The Crusades (1935), but he also rode herd on some films that are deliriously bizarre, particularly the likes of Madam Satan (1930) and Four Frightened People (1934). This Day and Age (1933) is a most unusual entry in Cecil's oeuvre, and for many years was rarely seen until Universal released the film in March of 2015 as part of their manufactured-on-demand Vault Series. It's a crime thriller with a good deal of admittedly heavy-handed moralizing, so it's fascinating reading about the tortuous process the movie went through behind the scenes with The Powers That Be in order to receive a stamp of approval.

DeMille has almost as many defenders as he does detractors; I'm not what you'd call a huge fan of his work (and where his movies are concerned, I gravitate more to his silent output) but I have to admit I was quite impressed with his visual style in This Day and Age. DeMille chooses to shoot crucial scenes in close-up (an example: a girl who's volunteered to distract Louis' bodyguard [Bradley Page] has to cut some telephone wires to keep him from being tipped off that the kids have put the snatch on Garrett), and in the sequence with Billy's funeral, he shoots upward at the priest and mourners as if he were in the casket with Billy. A shot of several chorus girls crawling around on stage as they perform 'Three Blind Mice' is superimposed over the three students looking for evidence in Herman the Tailor's shop (suggesting they're in way over their heads), and in an audacious-and-not-subtle-in-the-slightest shot, a shot of a caged rat dissolves into the personage of Louis Garrett himself.

Though the story for This Day and Age is often believed to have been concocted by screenwriter Bartlett Cormack, Cecil B. would credit in his autobiography Sam Mintz as the author, with Cormack receiving the onscreen nod for fashioning its scenario. This Day's plot bears a strong similarity to that of Fritz Lang's classic M (1931), with its criminal underworld banding together to bring child killer Peter Lorre to justice. Music, in the form of Edvard Grieg's 'In the Hall of the Mountain King,' plays a role in M and is duplicated in This Day and Age with the use of 'Yankee Doodle' as a signal shared by the students out to round up Bickford's Garrett. This Day features several familiar tunes, including 'The Bear Went Over the Mountain' and 'The Battle Hymn of the Republic,' in a prolonged sequence in which the youngsters march Garrett through the streets (a homage to the pageantry often spotlighted in the films of John Ford, perhaps?).

If Franchot Tone had been younger (he was 27 at the time), he might have landed the role of This Day's protagonist, Steve Smith; instead, 21-year-old Richard Cromwell added another title to his cinematic resume that would additionally culminate with such movies as The Lives of a Bengal Lancer (1935) and Jezebel (1938) before his career petered out at the end of the decade. The viewer will have to suspend a bit of disbelief watching This Day and Age because many of these performers simply aren't believable as high school students. The most egregious offender is Judith Allen, billed in This Day as a DeMille 'discovery;' Cecil B. hired her to play the role of virginal Gay Merrick -- the love interest of Smith and his rival, Morry Dover (Ben Alexander) -- but had not been clued in that Allen was married...as expected, the tabloids had a field day when this tidbit was discovered. (Personally, I thought it was obvious Allen was too old for the role; the only time she was ever going to see seventeen again was if the blackjack dealer decided to stand pat.)

As an old-time radio fan, seeing Ben Alexander as Morry (Morry starts out as a real rotter, then turns semi-hero after he realizes he's inadvertently responsible for Billy's death) was a real hoot; Ben played a character named 'Bashful' Ben Waterford on the sitcom The Great Gildersleeve, and of course, later worked both on radio and TV as Frank Smith, partner to Joe Friday (Jack Webb) on Dragnet.

There are a number of great character personages in This Day and Age: Hal Roach regulars Mickey Daniels (as a student named 'Mosher') and Billy Gilbert (playing it straight as the manager of Bickford's nightclub) are on hand, as are Charles 'Ming the Merciless' Middleton (he's the real D.A.), Samuel S. Hinds (seen briefly toward the end as the mayor), and future B-western sidekick Fuzzy Knight (as one of Bickford's goons) -- whom I always mention in these reviews because he hails from my home state of West Virginia (he's a Fairmont boy!). John Carradine (billed as John Peter Richmond) also has a small role as the assistant principal, and several members of the student body are represented by the likes of Don 'Red' Barry, Frank Coghlan, Jr., Sidney Miller, Robert Parrish, and Toby Wing.

This Day and Age is a most enjoyable movie romp; at times it reminded me of an elongated Crime Does Not Pay short, and I'm a sucker for those little two-reel morality plays. Even though it has its weaknesses (the ending on this one induced uncontrollable eye-rolling), it's worth spending an hour-and-a-half both for Pre Code fans and admirers of the incomparable Cecil B. DeMille.