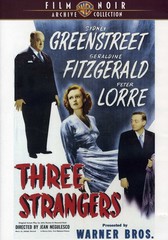 Where's That Been? - Three Strangers

Crystal Shackleford (Geraldine Fitzgerald) lures two gentlemen -- Jerome K. Arbutny (Sydney Greenstreet) and Johnny West (Peter Lorre) -- to her London apartment on the eve of the Chinese New Year in 1938. She has done so in the belief that a wooden statue of Kwan Yin, the Chinese goddess of destiny and fortune, will grant the three of them a wish at the stroke of midnight. The same wish must be shared by all three, so Crystal decides that they should request money...and with a sweepstakes ticket for the Grand National horse race that Johnny finds in his pocket, the trio make their wish before Kwan Yin at the desired hour. They also agree not to sell any portion of the ticket -- to 'let it ride' to the end, as it were.

Arbutny is the ideal candidate to draw up the agreement that all three sign; he's a solicitor by trade, and though a honest man he's been forced to dip into the funds of a trust belonging to widow Lady Rhea Beldon (Rosalind Ivan) when the stock he's been speculating in goes south (and he needs much coinage later when the margin is called). Crystal desires money to declare her independence from her estranged husband David (Alan Napier); their romantic ardor has cooled, and David has demanded a divorce so he can marry the woman with whom he's fallen in love while in Canada, Janet Elliot (Marjorie Riordan). Crystal's obsession with David is so intense that she scotches a promotion he's due in his government job, and lies to Janet that she's pregnant with David's baby -- resulting in Miss Elliot's return to The Great White North.

It is Johnny West who's the recipient of real hard luck; recruited to be a lookout for a robbery attempt by a criminal mastermind named Bertram Fallon (Robert Shayne), the theft does not go as planned and Fallon murders a watchman in his getaway. Johnny has no memory of what went down -- he's got a pretty heavy pull on the bottle -- and he's forced to lay low with another participant in the caper, Timothy 'Gabby' Delaney (Peter Whitney). Johnny and Gabby are attended to by Fallon's girlfriend Icey Crane (Joan Lorring) who, despite committing perjury on the stand to help Fallon, has fallen in love with the hapless Johnny. Fallon, like a true cornered rat, finks on Johnny and Gabby as his accomplices and Johnny is picked up by the police.

Just when all hope seems lost for the 'three strangers,' it is announced that their sweepstakes ticket has drawn the favorite, Corncracker, in the Grand National. Kwan Yin has made good on the prophecy, but as the trio will soon learn, at a terrible price. To quote a line from Bela Lugosi in The Black Cat (1934): 'Supernatural, perhaps...baloney, perhaps not.'

'It has always been man's nature to invent idols on whom he could place the responsibility for his own actions,' reads a title card at the beginning of Three Strangers (1946). A New Year's tale (okay, it's the Chinese New Year -- but it still works) that offers a sardonic commentary on avarice, destiny and paranoia, Strangers bears the unmistakable stamp of the man who co-wrote the movie's script, John Huston. The film shares many of the same thematic occurrences that will resurface in Huston's later works (human frailties, fate, etc.) like The Treasure of the Sierra Madre (1948) and The Asphalt Jungle (1950).

In Strangers, a trio of disparate characters are brought together for the expressed purpose of seeking fortune and/or glory, much like the gold-mining protagonists in the later Sierra Madre and the career criminals masterminding a heist in Jungle. Those familiar with Huston's work are aware that these endeavors are rarely successful, and often result in wryly humorous endings that make the moviegoer both sad and yet thoughtful about how irony can be pretty ironic sometimes, as I often joke. Strangers, Sierra Madre and Beat the Devil (1953) also end with characters laughing at the absurdity of it all: they may be bloodied and bowed, but they're never beaten.

Three Strangers also shares a concept with Huston's debut masterpiece The Maltese Falcon (1941): the idea of an idol or statue as a gateway to riches. One might be tempted to think that Strangers was conceived as a follow-up to the earlier success, and in a way, it was and it wasn't. Strangers emerges triumphant in the chicken-or-the-egg equation: Huston came up with the idea for the story in 1936 while working for the Gaumont-British studios in London, inspired by a figurine he purchased in an antique shop. Reportedly, Huston pitched Strangers to director Alfred Hitchcock; Hitch loved the story, but his employers did not.

So Huston held onto the idea until he joined Warner Bros. as a writer in 1937; a press release in The Los Angeles Times from 1939 even announced that Bette Davis and George Brent would star in the project, entitled Three Men and a Girl. That picture was never made, and it continued to be kicked around until after the success of Falcon, when the studio thought Strangers would make a dandy sequel -- and even planned for Greenstreet, Mary Astor and Humphrey Bogart to star -- but lost enthusiasm when they learned that the rights to the Falcon characters had reverted back to the author of the novel, Dashiell Hammett.

John Huston co-wrote Three Strangers with Casablanca's Howard Koch, but he wasn't able to sit in the director's chair because he was still serving a stint as a lieutenant in the U.S. Army Signal Corps. So the directorial reins were handed over to Jean Negulesco, who surprised more than a few people when he insisting on casting Peter Lorre -- known for his menacing 'heavy' roles -- as the romantic lead that is Johnny West. (Negulesco was a great admirer of Lorre's work.) Peter rarely got the opportunity to play heroic parts; one such exception is The Mask of Dimitrios (1944), in which he's also teamed up with Greenstreet. The two men would make a total of nine films together (including a 'specialty spot' in 1944's Hollywood Canteen), ending with The Verdict in 1946.

Lorre is splendid as West, an unrepentant dipsomaniac who seemingly strolls through life with a shrug -- he may be down-and-out, but he possesses an admirable erudition (a minor character remarks that he 'talks like a gentleman'). Sydney Greenstreet's performance has been criticized for being a bit over-the-top (but, hey -- this is Greenstreet we're talking about) yet I think he's first-rate as a man desperately clutching at straws to maintain his respectability. And to me, Geraldine Fitzgerald was never better when she played women like Crystal Shackleford, a woman who displays vulnerability despite being wicked to the core (it's a shame that 1945's The Strange Affair of Uncle Harry isn't available on DVD in this country). Strangers also features superb support from the supporting cast (I got tickled seeing Peter Whitney so thin), which includes a lot of great veteran British character thesps like Holmes Herbert and Ian Wolfe in uncredited parts.

I've withheld the ending to Three Strangers because it's a real pip, and Huston aficionados can't afford to miss it (they may already be familiar with it...but for those of you who haven't, rectify this immediately). Peter Lorre's glee at how 'it's a funny old world' always reminds me of the wrap-up to Beat the Devil (in which he appeared with Humphrey Bogart), which finds Bogey's character laughing uproariously and remarking 'Oh, this is the end...'