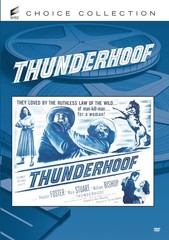 Where's That Been? - Thunderhoof

Horse breeder Scotty Mason (Preston Foster) is on a mission in the deserts of Mexico: he's out to capture an elusive wild stallion that answers to 'Thunderhoof,' a magnificent beast Mason hopes to snare for the purpose of starting his own ranch with his wife Margarita (Mary Stuart), a former cantina singer. Scotty has enlisted the help of a sidekick identified only as 'The Kid' (William Bishop); many years previous Scotty rescued The Kid from a quicksand bog and since that time has come to think of his partner as an adopted son. The problem is, his 'son' seems less interested in capturing Thunderhoof and more focused on getting Margarita to run away with him -- the couple had a past romance before she became Mrs. Scotty, though she swears to her husband that's a closed chapter in her life.

Scotty literally has to fight The Kid to persuade him to help in the capture of Thunderhoof; they eventually subdue the horse, but the struggle comes at a price: Scotty has broken his leg as a result of a mishap with his own mount. With Scotty incapacitated, The Kid starts to get ideas about 'Maggie' again. The obsessed Mason, has other plans and the three of them begin an arduous trek back to the Rio Grande-Texas border with Scotty's prize...a journey that will sadly come with a personal cost.

Thunderhoof (1948), released to MOD DVD by Sony Pictures Entertainment in December of 2014, is an odd B-western. It's a far cry from the usual oaters cranked out by Columbia, a studio best known for the programmer exploits of Saturday matinee cowboys like Buck Jones, 'Wild Bill' Elliott, Tex Ritter, Tim McCoy, Gene Autry and Charles Starrett (a.k.a. The Durango Kid). There are only three characters in the film -- four if you count the titular equine -- and they certainly don't talk like they're in a B-western; they speak like individuals in real-life, thanks to a literate and adult script from Harold Jacob (Hal) Smith (The River's Edge, Inherit the Wind), who would share an Oscar for Best Screenplay in The Defiant Ones (1958). (Thunderhoof may have been an original screenplay for Smith, but its plot is awfully similar to that of a Jack London short story, 'White Silence.') But don't be fooled into thinking the movie is all talk-talk-talk; there's plenty of action and suspense in Thunderhoof accompanying the dialogue, much of it sharp and audaciously philosophical.

Thunderhoof is also unusually dark material for a B-picture. Much of this can be credited to director Phil Karlson, who cut his teeth on Monogram pictures with the Bowery Boys (Live Wires, Bowery Bombshell) and Charlie Chan (The Shanghai Cobra, Dark Alibi) before moving to Columbia in 1948 and impressing the studio brass with entries like Adventures in Silverado (1948) and Ladies of the Chorus (1948; one of Marilyn Monroe's early efforts). Karlson hit his stride in the 1950s with several film noirs that are now considered classics among fans of the film style: Scandal Sheet (1952), Kansas City Confidential (1952), 99 River Street (1953) and The Phenix City Story (1955).

Essaying the role of Scotty is Preston Foster, an acting veteran (last mentioned here at 'Where's That Been?' as the villain in 1947's Ramrod) who imbues Mason with an Ahab-like obsessiveness with the uninhibited Thunderhoof; it is remarked in the movie that Scotty is more concerned with the welfare of the horse than that of his wife. Scotty never wavers in his belief in the legend of the horse: 'There's a story they tell that whoever catches him gets what's coming to him...his judgment right here on earth.' Foster and director Karlson were old pals from Preston's days at Universal (Karlson was an assistant director then), when he appeared as Detective Bill Crane in several of the studio's Crime Club programmers, and the two men later reteamed for The Big Cat (1949) and Confidential (Karlson also directed a handful of episodes from Preston's 1954-56 series Waterfront).

Actress Mary Stuart's film roles include Adventures of Don Juan (1948) and The Cariboo Trail (1950), but she's probably best remembered as a daytime doyenne on Search for Tomorrow, though she also appeared on One Life to Live and The Guiding Light. She's pleasing to the eye as Margarita, and exerts a tender vulnerability as a woman who thought she outgrew her 'wild' tendencies once she tied the knot with Scotty Mason, but finds herself sorely tempted by the entreats of The Kid. As The Kid, William Bishop can go from zero to charming in six-point-two seconds...a far cry from his bland turn in the previously reviewed The Killer That Stalked New York (1950). Admittedly, I misjudged him from seeing that one movie (I have a feeling his 'phoning-it-in' might have had something to do with being unsatisfied with the part) because I later read that a number of reviewers made strong cases for rallying to his cause. Bishop would also (like his co-stars) gravitate to the small screen as the star of the 1954-56 sitcom It's a Great Life; I'd love to see Adventures in Silverado (another collaboration between the actor and director Karlson) to get a better judgment of an actor who sadly passed away too soon in 1959 at the age of 41 (before becoming an actor, Bishop was a one-time law school student at WVU!).

I know that for many, B-westerns aren't every classic movie fan's cup of Orange Pekoe...but I was really bowled over by Thunderhoof, an ambitious programmer where the hunt for the horse is really secondary to its themes of jealousy and frustration. It reinforced why I'm such a fan of Phil Karlson's work, and among the 'new' classic movies I've had the pleasure of seeing this year it's unquestionably among the top five. Highly recommended.