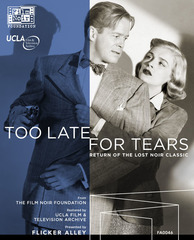 Where's That Been? - Too Late for Tears

If the name 'Roy Huggins' strikes a familiar tone, it might be because you watch as much classic television as myself and my ClassicFlix colleague Rick Brooks. Working for Warner Brothers in the mid-1950s, Roy created two of their biggest small screen hits in Maverick and 77 Sunset Strip. In the 1960s, he was responsible for such shows as Bus Stop and Run for Your Life, but his biggest success came about when he was inspired by the Dr. Sam Sheppard murder case to create The Fugitive. In the 1970s, he co-created (with Stephen J. Cannell) former Maverick star James Garner's comeback vehicle The Rockford Files.

Huggins' path to a lucrative screenwriting career for movies and television began with the publication of his first mystery novel in 1946, The Double Take, adapted for the silver screen two years later, as I Love Trouble with Franchot Tone as the protagonist, detective Stuart Bailey. (A name no doubt familiar to you 77 Sunset Strip fans out there.) Bailey was also a character in Roy's second literary effort (the author excised the detective when his work was initially rejected by The Saturday Evening Post), a novel originally saddled with the unfortunate title Break the Wild Wind. It was quickly (and wisely) changed to Nothing But the Night, but by the time it was serialized in the Post beginning in April of 1947 Huggins had settled on Too Late for Tears.

Independent producer Milton Sperling acquired the rights to Too Late for Tears (1949), but upon hearing that Joan Crawford was interested in the property Sperling's fellow producer Hunt Stromberg made Milton an offer he couldn't refuse. Stromberg also shrewdly brokered a deal with B-picture studio Republic Pictures to provide the facilities and financing for Tears, while leaving distribution to United Artists and retaining a healthy cut of the profits himself. Crawford eventually backed out of the project, as did leading man Kirk Douglas (he went on to make Champion), so Hunt struck another sweet deal with Hal B. Wallis, allowing him use of Wallis contractees Lizabeth Scott, Don DeFore, and director Byron Haskin.

Scott is the film's femme fatale; she's Jane Palmer, a bored hausfrau who experiences a financial windfall of 0,000 when an unknown motorist lobs the sixty large into the back seat of her convertible as she and husband Alan (Arthur Kennedy) are on their way to a dinner party. Alan, solid citizen and former Boy Scout that he is, tells his wife they can't keep the money, but she persuades him to wait a week before turning in the cash, and he secures the satchel of loot in a locker in Union Station.

From that moment on, Jane has only one thing on her mind: finding a way to keep all that boodle. She's so obsessed with how the money will change her and Alan's lives that she goes on a spending spree even before she's moved on to the step where she talks her hubby into keeping the dough. Her shopping excursion attracts the attention of one Danny Fuller (Dan Duryea), a police detective who comes around to Casa del Palmer purportedly investigating a theft.

Fuller's detective credentials turn out to be bogus: he was the individual who was supposed to receive the money that night, and he's understandably a little put out that it's not in his possession. If Alan has his way, nobody's going to benefit from that 0,000, so Jane proposes she and Danny join forces to insure a proper 50-50 split. Alan winds up the low man on the totem pole in this arrangement, however, as his ever-lovin' Jane plans a little murder.

Depending on which source you consult, Too Late for Tears on its initial release either did well at the box office or received a lukewarm reception. Eddie Muller, the legendary 'Czar of Noir,' calls Tears 'the best unknown American film noir of the classic era.' It hasn't been completely difficult to track down; the movie has hosted both VHS and DVD releases. But because of its original United Artists distribution, Tears became a movie 'orphan,' and many of the home video prints (particularly the 2004 Image Entertainment release) weren't much to write home about.

It was through the efforts of Muller and the Film Noir Foundation that Too Late for Tears underwent a major preservation renovation (with a generous assist from the Hollywood Foreign Press Association's Charitable Trust) in time for a re-premiere at San Francisco's Noir City Film Festival in January of 2014. Tears later received the spotlight during a Turner Classic Movies 'Summer of Darkness' festival in 2015, and thanks to the fine folks at Flicker Alley, Tears has made its Blu-Ray debut (in a DVD/Blu-Ray combo release) this May.

Too Late for Tears is an excellent showcase for film noir mainstay Lizabeth Scott. Scott's publicity nickname was 'The Threat,' which was sort of an indirect reference to the fact the actress was thought by many to be 'the poor man's [Lauren] Bacall.' Scott and Bacall shared career similarities; they started out as magazine models (even working at the same agency at one time) and both had made pictures with Mr. Bacall (Scott co-starred with Humphrey Bogart in 1947's Dead Reckoning).

But 'The Threat' also hinted that while Lizabeth certainly spent a lot of time in Dark City, she wasn't always the 'bad girl' (she has a checkered past in The Strange Love of Martha Ivers, but cedes the femme fatale duties to Barbara Stanwyck in that one). Her Jane Palmer in Tears is plenty b-b-b-bad to the bone, however; she's a woman who clearly possesses no moral compass and much of the fun in Too Late for Tears comes from watching her tell lie after lie to achieve her money-grubbing ends. (Her fibs are obvious to the viewing audience, but the characters onscreen don't seem to notice.)

Scott is also fortunate to be paired with a worthy adversary (who later pledges allegiance to her) in Dan Duryea, playing a variation of the no-good, two-bit hustler he perfected in such films as The Woman in the Window (1944) and Scarlet Street (1945). (His nickname for Scott's character is not 'Lazy Legs' but rather 'Tiger.') What makes Duryea's character in Tears such a fascinating study is he starts out as an oily con man, but the more time he spends with Scott's Palmer he's transformed into a stone cold assassin, which clearly takes a toll on him (he develops a heavy dependence on the bottle).

Scott's destruction of Duryea is the reason I have a bit of difficulty accepting Arthur Kennedy as her husband in this movie. Kennedy doesn't seem like the type to have been fooled by Scott all the years they've been married; I kind of wish Stromberg had used Wendell Corey as Alan Palmer (Corey was initially signed, but he bowed out) because Corey would have been far more believable as a luckless sap entangled in Lizabeth's web.

The rest of Tears' casting is first-rate: Kristine Miller as Kennedy's suspicious sister, Don DeFore as a mystery man claiming to be an old war buddy of Alan's (is he a detective or the owner of the stolen money?), and Barry Kelley as an honest cop (for a change). (Look for one-time Dead End Kid Billy Halop as the owner of the boat ride concession and future Dukes of Hazzard player Denver Pyle as the patsy who helps retrieve Scott's briefcase.)

Too Late for Tears was one of many movie properties that helped propel Roy Huggins to his eventual television mogul stardom; he scripted such noir films as The Lady Gambles (1949) and Pushover (1954), and even sat in the director's chair on a fairly decent Randolph Scott oater, Hangman's Knot (1952). Thanks to the Film Noir Foundation and Flicker Alley, we're able to enjoy one of Huggins' earliest contributions to the noir style -- a movie you should definitely mark down on your 'must-see' checklist.