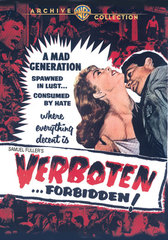 Verboten! (1959), a World War II melodrama written, produced and directed by cult moviemaker Sam Fuller, bears the distinction of being the last movie to roll off the assembly line of the RKO studio.  Co-produced with Fuller’s own Globe Enterprises, the film was eventually distributed by Columbia Pictures because RKO had already closed up its tent before the movie’s release. It’s the story of Sgt. David Brent (James Best), who’s injured as he and two of his fellow riflemen (both of whom wind up killed) go after a German sniper in the German town of Rothbach.  Brent is pulled to safety by Helga Schiller (Susan Cummings), who nurses him back to health and hides him from the SS platoon in the process of retreating as the Americans are capturing the city.  David has fallen for his rescuer, and plans to marry her…an idea that doesn’t sit well with his commanding officer, because it’s against protocol for soldiers to fraternize with German women.  (You might even say it’s…verboten!)

David soldiers on (sorry) anyway and ties the knot with Helga, and instead of taking his bride to the U.S. (more red tape) elects to stay behind and work in the Food Office of the occupational government.  He’s able to use his muscle to secure employment for Helga’s younger brother Franz (Harold Daye) and a friend of hers from her old neighborhood, Bruno Eckhart (Tom Pittman).  Helga has confided in Bruno that she considers David “an American goldmine,” seeing him as a benefactor in better rations, shelter, etc. and ultimately her ticket out of Germany.

Unbeknownst to David, Bruno is a member of a group nicknamed “the Werwolves” – a secret Nazi organization with plans to resume control over Germany through sabotage and sowing dissension among the occupied.  Franz has also been recruited to join the group.  A popular Werwolf method of bringing about chaos is hijacking necessary food supplies, and it is after one such hijacking that a mob of civilians stage a protest outside the building where David works.  After a heated argument with their spokesman, David punches him out and is in turn pummeled senseless by the protesters.  He is then fired by the office for this stunt, and afterward learns about Helga’s “goldmine” crack from Bruno.  When David confronts Helga, she admits that she did feel that way at first…but that she does genuinely love him.  Angry, David storms out.

Meanwhile, there is a bit of dissension among the Werwolves – one member objects to the group stealing medical supplies, and Bruno introduces him to the pointy end of a knife.  Helga subsequently learns that Franz is involved with the organization, and is able to undo his indoctrination into the brotherhood of little Nazi thugs by insisting he accompany her to a session of the Nuremberg trials.  Franz then realizes that he’s made a huge mistake, and he reveals to David all he knows about the Werwolves.  But is it too late for David to reconcile with Helga…and is Franz in danger from Werwolf retribution when he returns to its headquarters to retrieve information on its membership…?

(James Best in Verboten!)
The first lesson classic film fans learn after watching a Sam Fuller movie…is that Sam did not do nuance.  His in-your-face style of filmmaking, influenced by earlier careers as a newspaperman, infantryman, novelist and screenwriter, often dealt with lurid and sensationalistic subject matter that in effect served as a disguise for serious themes addressing controversial social/political issues and meditations on the human condition.  He was, as one reviewer puts it, the “master of the cinematic tabloid headline”—and in the days before the Law & Order television franchise got underway, Sam was often inspired to devise movie plots “ripped from the headlines.”

In 1959, the year Verboten! was produced, newspapers were reporting that despite recent signs of neo-Nazism, the recovery effort in West Germany continued apace…but it was the rise of neo-Nazis that provided the fodder for Verboten’s plot.  It was an unusual film in Fuller’s oeuvre; it would be the first movie Sam made to deal with World War II, a subject later addressed in Merrill’s Marauders (1962) and the film considered by many Fuller devotees to be one of the director’s finest, The Big Red One (1980).  Fuller was no stranger to war drama: one of his earliest efforts, The Steel Helmet (1951), is often believed to be one of the best military-themed films produced; he also addressed the topic in Fixed Bayonets (1951) and China Gate (1957).

Since its release to MOD DVD by the Warner Archive in 2010, Verboten! has picked up some new admirers as well as thumbs-up from the Fuller faithful.  I’ve always been a fan of Sam and his kitchen-sink approach to filmmaking, but I freely admit that it doesn’t always work if the subject matter isn’t particularly “punchy.”  Fuller vehicles like Shock Corridor (1963) and The Naked Kiss (1964) succeed because of their daring subject matter, and the crazy atmosphere in both movies exists to mask these ideas from the Deans of Censorship.  Verboten! seems to have one message: that Nazis are bad; even the ending on this one is a little unsatisfying.

Those individuals who enjoy Sam’s movies more than I might find a little more food for thought in Verboten!: it features concentration camp footage a couple of years before the critically heralded Judgment at Nuremberg (1961), and its opening scenes (where Best and his friends chase the sniper through the ruins of Rothberg) are quite impressive.  Veteran military man Fuller often decried how “orderly” war was presented in feature films, protesting that the movies seldom captured the unpredictability of conflict—but he does an excellent job in presenting suspense in the first scenes, oddly accompanied by the strains of Beethoven’s Fifth Symphony.  (When Paul Anka starts crooning the movie’s theme on the soundtrack, however, you might experience the same eye-rolling as I did.)

James Best is perhaps best recognized for his turn as the endearingly buffoonish Roscoe P. Coltrane in the hit TV series The Dukes of Hazzard (1979-85)…but in the 1950s/1960s he turned up in supporting roles in TV and movies frequently, generally playing a snot-nosed punk still wet behind the ears (he’s got a great showcase as Randolph Scott’s prisoner in 1959’s Ride Lonesome, and would later work for Fuller in Shock Corridor as the shell-shocked P.O.W. who’s convinced he’s General Jeb Stuart).  His leading lady in Verboten! is Susan Cummings (a.k.a. Suzanne Tafel), who also did her fair share of small screen work—including a memorable role as the woman in the Twilight Zone episode “To Serve Man” who explains to Hart Bochner what the title actually means.  Some of the romantic dialogue between Best and Cummings in Verboten! is frequently awkward and stilted, and many of their scenes together are so unconvincing they weaken the film somewhat.  There are, however, excellent turns by radio veteran Paul Dubov as Best’s superior, Steven Geray as the town burghermeister, and Tom Pittman as Bruno—the latter actor was just starting to make a name for himself in television shows and movies (The Young Stranger, The Proud Rebel) before he perished in a car crash before Verboten’s release.

Fuller’s filmmaking was always in earnest…but on occasion, his low budgets weren’t able to support the daring ideas behind his movies, and I think that’s where Verboten! really falls short.  Still, for fans of the director’s work it’s one you’ll want to check off your must-see list.