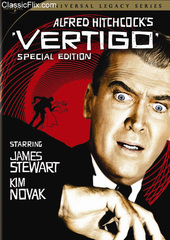 This spooky, unsettling film generally appears near the top of 'best movie' lists, ranking 2nd after Citizen Kane in 2002's Sight and Sound survey, coming in at number one on AFI's list of Mysteries, and ninth on their '100 Years...100 Movies' 10th Anniversary list. Vertigo is also considered to be Alfred Hitchcock's masterpiece, and remains the most discussed film in the director's stellar body of work, inspiring and 'obsessing' critics, scholars, and fans for generations.

Considered a disappointment when it premiered in 1958, it did only moderate business at the box office, with many critics and audiences' complaining it was too slow. The critic at The Los Angeles Times, for example, wrote that although Vertigo was an interesting movie, Hitchcock 'has taken too long to unfold it.' Variety agreed, noting that, 'Through all of this runs Alfred Hitchcock's directorial hand, cutting, angling and gimmicking with mastery. Unfortunately, even that mastery is not enough to overcome one major fault -- that the film's first half is too slow and too long.'

Other critics found the plot unrealistic: Time magazine called it 'another Hitchcock-and-bull story,' The New Yorker claimed Hitchcock had 'never before indulged in such farfetched nonsense' as he did in this film, and The New York Times called the film enjoyable but 'devilishly far-fetched' with 'a big hole -- a big question-mark -- at a critical point. It will stop you, if you're a quick thinker. But try not to be and enjoy the film.'

Besides the lukewarm critical and popular reception, Vertigo was only nominated for two Academy Awards (Best Art Direction and Best Sound), and won zero, a shocking result for a movie now considered to be one of the best ever made.

But that's Vertigo's magic: it grows on you and sticks in your mind long after the end credits roll. It seems to only get better and more fascinating with time. This quality was acknowledged by the New York Film Critics Circle in 1996 when they named Vertigo the Most Distinguished Reissue. (The film has been re-released in theaters several times, with its first renaissance coming in 1963, and others in 1983 and 1996.)

Vertigo is based on a French novel called D'Entre les Morts (From Among the Dead), though various screenwriters, along with Hitchcock, altered the story as they spun it into a screenplay. Hitchcock especially infused the film with some of his own preoccupations and compulsions, and it is usually considered to be his most personal movie. The fundamental plot-line of obsession and molding a woman (especially a cool blonde) into one's ideal has given Hitchcock scholars and fans plenty to work with!

As screenwriters and Hitchcock wrestled with the story, Vertigo went through many potential and spooky titles, including 'From Among the Dead,' 'From the Dead,' 'Among the Dead,' 'There'll Never Be Another You,' 'Confessions on Tower,' and 'Darkling I Listen.' Paramount wasn't sure moviegoers were familiar with the term 'vertigo,' fighting the title at first. But Hitchcock won out, though Paramount insisted Hitchcock's name and those of the actors be emphasized over the confusing title on the posters.

The movie stars James Stewart in his fourth and final Hitchcock film. Although Stewart was 49, and, as Hitchcock admitted later, perhaps a bit too old for the part, the actor was Hitchcock's first choice. Kim Novak co-stars, but Vera Miles, whom Hitchcock had been grooming to be a star, was originally cast in the role. But when Miles became pregnant, and delays to the start of filming made it increasingly difficult for her to play the part, she bowed out. (Although her pregnancy is generally cited as the reason Miles was replaced, some sources claim Hitchcock doubted she was right for the role. In any case, Miles would get her shot at another Hitchcock movie when she played Janet Leigh's sister in Psycho (1960)).

Hitchcock replaced Miles with Novak, who was already a star after such films as Picnic (1955), The Man With the Golden Arm (1955) and Pal Joey (1958), though this would become her most famous role. (Novak and Stewart starred together once more in Bell, Book and Candle which was released at the end of 1958).

Stewart plays Scottie, a former detective cursed with a bad case of acrophobia (fear of heights). An old friend hires him to shadow his wife Madeleine (Novak), who seems obsessed, and perhaps even possessed, by one of her long dead ancestors, a woman named Carlotta. As Scottie watches the coolly restrained blonde go about her strange, worshipful routine, he falls in love with her. But there is much more going on than a 'simple' obsession or haunting, and things get complicated and tragic quickly.

Stewart and Novak carry off the difficult, nuanced roles brilliantly. The New York Times critic Bosley Crowther wrote, 'Mr. Stewart, as usual, manages to act awfully tense in a casual way, and Miss Novak is really quite amazing...' As with almost everything in this movie, Stewart and Novak's performances are now recognized as some of their best.

Everything, from Novak's hairstyle to the costumes, sets, plot, sound, and innovative cinematography show signs of Hitchcock's notoriously detail-oriented brain at work. The director ensured that his film was stacked with personnel at the top of their craft to achieve his vision: famed graphic designer Saul Bass crafted the classic title sequence with its swirling, vertigo-inducing spirals, and Bernard Herrmann, who would later write Psycho's iconic score, composed the music for this film. Abstract artist and sculptor John Ferren designed the dizzying dream sequence; he had worked with Hitchcock on The Trouble with Harry (1955) a few years earlier.

Also notice the costumes, paying particular attention to how Novak's clothes change throughout the film. Costume designer Edith Head (who collaborated with Hitchcock on eleven films between 1954-1976) worked closely with the director. Her costumes for Novak are integral to the plot and characters, and Novak later said the costumes were incredibly helpful to her as she developed and played her part.

Even at the time of its release, the film won praise for its music and sound, color design, cinematography, and use of VistaVision, Paramount's widescreen format. For example, note the splashes of gold, red, and green used throughout the film, as well as several innovative effects, like the 360 degree kiss (filmed with the actors on a turntable in front of rear-projected footage), the stylized dream sequence, and the 'vertigo' effect that has since been copied countless times. But then almost every detail in this obsessively analyzed film has been discussed and applauded.

Vertigo is an incredibly dense, haunting, and strange film. It will entertain and delight a casual audience, but there is plenty here for even the most devoted Hitchcock fan or movie buff. So venture down the Vertigo spiral this Halloween -- you won't be disappointed!