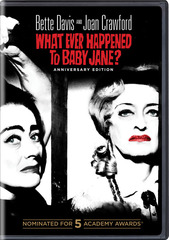 Teen Scene: What Ever Happened to Baby Jane?

October is synonymous with autumn and, for some of you, synonymous with Halloween, too. So, here we are again with another movie that will make you shiver, but you will love! However, unlike my previous review of The Innocents, What Ever Happened to Baby Jane? is not classified as a horror movie, but as a drama or a drama-thriller. That's not important, because Robert Aldrich shows you and tells you a story horrifying enough to give you nightmares. In other words, it's perfectly suitable for Halloween.

The young, blonde Jane Hudson, known as 'Baby Jane Hudson,' is a successful child performer on-stage. She makes a lot of money and is pressured by her father to succeed. Her sister Blanche, a much simpler person, living in the shadow of her fame, but, as her mother has promised her, one day she'll be famous. Indeed, several years later, in their adult life, both Blanche (Joan Crawford) and Jane (Bette Davis) have careers as movie actresses. This time Blanche is the successful one and Jane is about to be forgotten since movie directors don't see talent in her anymore. One night, something terrible happens: Blanche is in an accident and loses the use of her legs, stuck in a wheelchair for the rest of her life. This is just the prologue...

After the opening credits, we are brought a few years later. Blanche and Jane are now two mature women living together in a big house in Los Angeles. Blanche is trapped in her wheelchair and room all day long, and Jane 'takes care of her.' Well, in her own way. As a matter of fact, this is the occasion for Jane to take her vengeance. She can't accept the fact Blanche ended up the successful one so she'll make her sister's life a living hell. Blanche, who has a good heart, understands her sister, who's also an alcoholic. For Blanche, Jane is sick and needs to be cured which won't be an easy mission. Meanwhile Jane wants to make a comeback in the show business.

What Ever Happened to Baby Jane? can be compared to Sunset Boulevard (another worthwhile film), for its themes of the fallen star refusing to grow old, who refuses to be forgotten and, even if it's a hopeless case, wants to make a comeback. Sorry, a RETURN! But, unlike Sunset Boulevard, one element is added: revenge. Films about Hollywood are pretty interesting to watch as they make you understand the darker side of the movie business. I hear you saying: 'But this is just a movie!' Maybe, but we can agree that, somehow, it reflects a certain reality. Look at for example, those silent movie stars who were forgotten with the talkies arrival! Hollywood can make you rich, but not necessarily happy.

The most enjoyable thing about Baby Jane is the evolution of the characters. You see Jane's cruelty towards Blanche grow and know how it'll end. What Ever Happened to Baby Jane? is also a psychological movie. Of course, this psychological side is embodied in Jane. We, like Blanche, are eager to know why Jane's acting this way. Why is she plotting this undeserved revenge? Blanche, as far as we know, hasn't done anything wrong to her. Sisterly rivalry can be pretty bad sometimes! Jane complex mind is not only scary, but, somehow, completely fascinating because it's hard to explain.

Talking about sisterly rivalry, you'll be amazed to discover how this film is, at some points, a perfect reflection of reality. Indeed, the two actresses, Bette Davis and Joan Crawford truly hated each other in real life. Working together might not have been easy, but in a way, Robert Aldrich was right to cast them: he could be sure their acting would be sincere. I prefer Joan Crawford, but both are excellent actresses and, in this film, they give us one of the best performances of their career.

Even if What Ever Happened to Baby Jane? is not truly a horror movie, there are many aesthetic and narrative elements which will please scary movie lovers! Those who have seen the film will immediately think of the scenes where Jane gives horrible 'food' to Blanche for dinner. For those who haven't seen the film, I won't say more; my maleficent mind wants you to be as surprised as Blanche!

Also, those creepy Baby Jane dolls are an eerie object present throughout the film. Dolls are often used in horror films, especially porcelain ones. I remember, when I watched the trailer for this, I had to stop because the dolls were such a big part and honestly scared me. I really thought it was a horror movie with dolls coming to life and scaring people around them. After seeing it, I realized this was not the case, but, in a way, there's something so alive about those dolls, probably due to the fact they are a perfect copy of Baby Jane Hudson when she was a charming little girl. In her house, Jane owns one of those dolls and it's the only thing around that seems to make her happy by reminding her of her happy childhood.

On its release, What Ever Happened to Baby Jane? was a commercial and critical success. It's known as a classic today. It's a movie with delightful suspense that teens will discover with a great pleasure. They'll certainly be thrilled to discover another worthwhile film for Halloween.