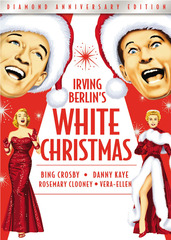 In September 1954, Variety wrote that 'White Christmas should be a natural at the box office, introducing as it does Paramount's new VistaVision system with such a hot ensemble as Bing Crosby, Danny Kaye, and an Irving Berlin score.'

Variety was right: White Christmas became the highest grossing film of 1954, raking in 2 million (that's over 02 million in today's money), and beating the #2 film, The Caine Mutiny, by over million. Its success wasn't surprising. When White Christmas was released, Bing Crosby was the top box office star in the country and Danny Kaye was #3. The title certainly didn't hurt, either, as Berlin's song 'White Christmas' was the most successful in American history and already linked with Crosby. Crosby sang it on his radio show in 1941, recorded it in early 1942, and performed it in Holiday Inn (1942). The song topped the charts and won the Academy Award for Best Song. It skyrocketed back to #1 twice in the 1940s, and became the best-selling single in history, a record it held for over fifty years before Elton John's 'Candle in the Wind' knocked it out of the top spot in 1997.

Paramount originally planned for White Christmas as a reunion for Crosby and Fred Astaire, Holiday Inn's co-stars. But Astaire didn't like the script, so Paramount cast Donald O'Connor. But O'Connor fell ill as production loomed, so the studio replaced him with Kaye. Kaye reportedly asked for a huge salary and was shocked when Paramount agreed. The studio calculated that waiting for O'Connor would cost them just as much, so they chose Kaye to keep the movie on schedule. Fortunately, Kaye and Crosby are great together: Variety wrote, 'Certainly [Crosby] has never had a more facile partner than Kaye against whom to bounce his misleading nonchalance,' and the pair 'click so well the teaming should call for a repeat.'

The plot concerns two performers (Crosby and Kaye) who meet in the Army and team up after WWII ends. But their work-focused world shifts when they meet a charming sister act (Rosemary Clooney, who started her career as one half of a sister act, and Vera-Ellen). The sisters are performing at a Vermont ski lodge over the Christmas season, and the men follow. They are surprised to discover an old friend owns the place, and dismayed to learn that low snowfall might force it to close. The four showbiz whizzes decide to 'put on a show' to save the lodge, providing the impetus for extravagant performances, and the romance plot gives rise to several tender Berlin tunes. (One of those duets, 'Count Your Blessings,' was nominated for Best Song, though it lost to the titular song from Three Coins in the Fountain.)

Paramount assembled a highly talented cast, though their skills varied. Vera-Ellen was a virtuosic dancer, but not much of a singer, so her voice was dubbed. And Clooney was a fantastic singer, but not much of a dancer. It was a similar situation with Crosby and Kaye, so in most of the numbers Kaye and Ellen literally dance circles around their co-stars. For three especially spectacular dances, John Brascia was brought in to partner Ellen. (He also danced with Cyd Charisse in Meet Me in Las Vegas (1956).) There are other cameos, too: look for Carl Switzer, Alfalfa in The Little Rascals (he appears in a photo as Bennie Haynes), and Barrie Chase, a dancer who was in the chorus of Daddy Long Legs (1955) and Kismet (1955), and partnered Fred Astaire in four of his television specials (she's the 'Mutual, I'm Sure' girl). And watch for George Chakiris in Clooney's solo at the Carousel Club.

This was the first film shot in Paramount's new widescreen format, VistaVision, the studio's answer to CinemaScope. Instead of using anamorphic processes, VistaVision was created by running 35mm film horizontally, which produced higher resolution than other widescreen formats. The movie is appropriately huge, bright, and colorful, with several enormous production numbers and sparkling costumes by Edith Head. The budget for tinsel and red satin for the finale alone must have been astronomical!

Paramount fills the VistaVision frame with visual splendor that's lavish even by classic Hollywood standards. The 'normal' costumes are elegant, but the 'performance' costumes are incredible explosions of shimmer and color! No surface goes unadorned; for example, Edith Head designed long gloves embellished with rhinestones for Clooney's 'Love, You Didn't Do Right By Me' number. They are stunning, but Clooney recalled that 'Those gloves were so uncomfortable. They were covered in rhinestones, so they would catch on anything I touched!' Oddly enough, all of Vera-Ellen's costumes cover her neck; it's been suggested that after suffering from anorexia for years, her neck was scarily thin and prematurely aged, so Head concealed it with high-necked outfits.

But footage of Ellen from the September 1954 premiere of A Star is Born shows her neck as fine. That premiere was after White Christmas filmed, so it seems likelier that the high-necked outfits were a 'trademark' choice. Head didn't neglect the men, and famously gave Kaye shoes and socks that perfectly matched his trousers so there was a long unbroken line from leg to toe for 'The Best Things Happen While You're Dancing.'

Directed by Michael Curtiz, White Christmas became his biggest hit (quite a distinction, as he directed such classics as The Adventures of Robin Hood (1938), Casablanca (1942), and Mildred Pierce (1945)). Variety praised Curtiz, writing that, 'The directorial handling...gives a smooth blend of music (13 numbers plus snatches of others) and drama, and in the climax creates a genuine heart tug that will squeeze tears.' The climax is built around 'White Christmas' and it's beautifully done. It was Crosby's signature song for a reason!

Variety was full of praise for the film, writing that Crosby performs with 'deceptive ease, selling the songs with the Crosby sock, shuffling a mean hoof in the dances and generally acquitting himself like a champion...Kaye takes in stride the dance, song and comedy demands of his assignment...proving himself an ace entertainer of virtually unlimited talent. Miss Clooney does quite well by the story portions and scores on her song chores, while Vera Ellen is a pert terper who can also handle her lines well.' Audiences agreed and flocked to the movie when it first hit theaters in October 1954 and it's remained a favorite for generations of viewers.

White Christmas is classic Hollywood at its most excessive and colorful: a glorious combination of widescreen Technicolor flash and unbelievably talented people doing what they do best. It's a joyful holiday classic that still wows sixty years after it burst onto the screen!