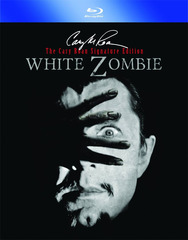 Where's That Been? - White Zombie

Neil Parker (John Harron) and his fiancee Madeleine Short are a young couple newly arrived in Haiti and very much in love; they're also fascinated by their unfamiliar surroundings, in which ominous drums beat in the background as they're briefed on tales of voodoo and black magic. Their trip has been made possible by the generosity of plantation owner Charles Beaumont (Robert Frazer); Beaumont has invited them into his home so they may be wed (and has promised Parker a plum banking position in the States) and has even asked missionary Dr. Bruner (Joseph Cawthorn) to perform the ceremony.

But Beaumont's motivations are not altruistic: he's pining for Madeleine himself, and solicits the advice of sugar mill owner 'Murder' Legendre (Bela Lugosi) as to how he can win her affections. Legendre, who commands an army of zombies to toil in his mill because he possesses extensive knowledge of the black arts, tells Beaumont what he doesn't want to hear: Madeleine loves Neil, and Chuck is always going to wind up in second place in that romantic race. You'll never guess the solution Legendre devises to help Beaumont...unless you guessed that 'Murd' transforms 'Mad' into a zombie, because he does just that.

Independent filmmakers Victor (who directed) and Edward (producing) Halperin spent 0,000 on the 1932 cult horror classic White Zombie, which benefited from the Halperins' liberal use of shooting on the Universal Studios lot (you'll recognize a few locations and props from previous productions; the hanging balcony was in The Hunchback of Notre Dame, the dark corridors from Frankenstein, etc.). They were also able to secure the services of Bela Lugosi, then basking in the glow of popularity after his triumph in Universal's Dracula a year earlier. Acres of old-growth forests have been cut down to produce the reams of paper examining why Dracula was both a blessing and curse for the Hungarian-born actor's career; I don't have time to examine the mistakes Lugosi made in choosing his post-Dracula roles (I'm double-parked) but there's no disputing that when Lugosi was firing on all cylinders he was en fuego. 'Murder' Legendre is one of Lugosi's finest film roles; a menacing presence who mesmerizingly combines the sinister and the sensual.

White Zombie, in many ways, is a re-telling of the Dracula film plot: Legendre is but a variation of Lugosi's carnal vampire and Madge Bellamy, as the innocent Madeleine, is the Mina Seward rescued by Jonathan Harker-substitute Neil. (Dr. Bruner is the Van Helsing of the piece, though the argument can certainly be made that he comes up short in this regard.) But there's also a fairy tale aspect to the film; like Snow White, Madeleine is 'poisoned' by evil forces (Beaumont and Legendre)...and in a climax reminiscent of Sleeping Beauty, Neil ventures into a foreboding castle to wake Madeleine from Legendre's spell. Some of the dreamlike atmosphere/narrative of Zombie is reminiscent of Vampyr, released to theaters that same year.

Admittedly, White Zombie is not quite in the same league as that Carl Dreyer classic; much of Zombie's dialogue is stilted and silly, and the acting--save Lugosi--is strictly amateur night. Bellamy mostly stands around and looks pretty (though in her defense, she's quite good at it) and does very little to delineate her pre- and post-zombie states. (Once zombified, she also demonstrates an admirable proficiency on the piano, which I found a bit odd.) Cawthorn's Bruner is around for light comic relief, but his repeated catchphrase 'Excuse me--would you happen to have a match?' is certainly no 'So, they call me 'Concentration Camp Erhardt,' eh?'

The male leads are the worst offenders; Harron, in particular, suffers from the same colorlessness that permeates many of the young male thesps in films of this era. I'm willing to cut Frazer a little more slack than some critics; true, his Beaumont is not very likable and Frazer himself isn't particularly good, but it was difficult for me not to feel a little sympathy for his character towards the end...a man who pays a terrible price to obtain true love without considering the cost. I need to give a special shout-out to character veteran Clarence Muse, uncredited as the driver taking Madeleine and Neil to the Beaumont plantation. Muse suffered a lot of the ignominies bestowed upon African-American actors in movies back then, but was able to suffuse even thankless roles with grace and dignity.

No, White Zombie is unquestionably Bela Lugosi's show; it's impossible to take your eyes off the man when he's on-screen, and those people who've not seen this film may have a passing acquaintance with it from Ed Wood (1994), where it plays on a TV set and is watched with rapt attention by the titular director (played by Johnny Depp) and his future star (Martin Landau). (As he watches, Landau's Lugosi memorably duplicates that odd gripping gesture with his hands signifying Legendre's concentration of his powers.) The cynic in me is trying not to comment that this footage from Zombie was no doubt used in Ed Wood due to the film's public domain status (hey--look at the money I saved us!).

Because of the expiration of Zombie's copyright (it was an independent production released by United Artists, and so had no studio looking after it), good quality prints of the film are hard to come by. The closest is the recent VCI Blu-ray release, which uses a 35mm print owned by archivist Cary Roan and saw action previously on a laserdisc (and later DVD) many moons ago. Despite its shortcomings, Zombie is a film that should be required viewing for horror movie mavens; some portions are hauntingly poetic (it's best seen in the middle of the night, when its creepy atmospherics really work on you) and it's considered the first feature on the subject, influencing classics such as The Ghost Breakers (1940), King of the Zombies (1941) and I Walked with a Zombie (1943). (The Brothers Halperin would later put together a 'sequel' in 1936's Revolt of the Zombies...but I would strongly suggest you avoid that one if necessary.)