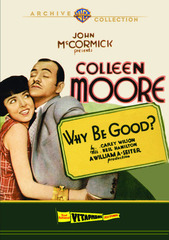 Winthrop Peabody, Jr. (Neil Hamilton) is scheduled to take over as the personnel manager of the department store owned by the senior Winthrop Peabody (Edward Martindel), so on the night before the big event, Winthrop's pals throw him a little 'farewell whoopee,' as his dad describes it. Winthrop, Sr. also takes his son aside to explain that with his new job comes great responsibility: he'll be supervising a staff of nearly 1,000 salesgirls...and the policy of the company is that fraternization between employees is strictly verboten.

Winthrop and two of his chums (Eddie Clayton, Lincoln Stedman) head off to The Boiler, a popular roadhouse where Winthrop crosses paths with a vivacious young girl named Pert Kelly (Colleen Moore). (Not to be confused with Pert Kelton, by the way.) Pert, having taken first prize in a Charleston contest, is there with her girlfriends (Collette Merton, Dixie Gay) and a 'sheik' (Louis Natheaux) who answers to 'Jimmy Alexander.' Though the general rule of thumb is one dances with the one who brung you, Jimmy winds up passed out after too many drinks from Pert's Charleston silver cup, so she takes Winthrop up on his offer to drive her home.

By the time the couple has arrived at Casa del Kelly, Pert has fallen head over heels in love with the gallant man who stepped in at the last minute to be her chauffeur. Because Winthrop kept her out until three in the a.m., Pert winds up being late for work at the department store where she toils as a salesgirl. When she's summoned to the personnel manager's office to address this infraction...well, this is where things get awkward.

Before Louise Brooks popularized the bobbed haircut and Clara Bow entertained movie audiences as the silver screen's favorite flapper, there was Colleen Moore. Moore actually preceded Bow as the movies' favorite Jazz Age baby, having starred in the popular Flaming Youth in 1923 (Colleen would later concede that Clara was her rival). Sadly, only one reel of Youth has survived the ravages of time so much of the reason why Moore isn't better known than Bow or Brooksie (though Colleen is a favorite with diehard film buffs and silent movie devotees) is many of her movies are inaccessible to a wider classic film audience.

A few Mom-and-Pop places carry Moore vehicles like Broken Hearts of Broadway (1923) and Ella Cinders (1926), but for a time the only Colleen Moore silent to be released by a major video company (Kino-Lorber's Reel Baseball) was 1919's The Busher, with Charles Ray and John Gilbert. (Colleen also appeared briefly in sound films; among her 'talkie' oeuvre are The Power and the Glory [1933] and The Scarlet Letter [1934], her final film.)

So the release of Why Be Good? (1929), Colleen Moore's farewell to silents, by the Warner Archive in November of 2014 was heralded as a major triumph by classic movie fans; the romantic comedy even had a premiere on Turner Classic Movies last September. The restoration of Why Be Good? has its origins in 2002 when Ron Hutchinson, founder of The Vitaphone Project (whose outstanding contributions include Classic Shorts from the Dream Factory, Volume 3 -- previously discussed in this column), addressed an audience at NYC's Film Forum by mentioning he had acquired the soundtrack disks for Good? even though the movie itself was lost.

'Au contraire!' was the reaction of film historian Joe Yranski, who enjoyed a close friendship with Colleen Moore; Yranski knew a 35mm nitrate print of Good? resided in an Italian archive (donated by actor Antonio Moreno) and so negotiations to restore both Good? and another previously-thought-lost Moore film, Synthetic Sin (1929), began in earnest for the next ten years. (While Ron had all of the Vitaphone material for Good?, only the last reel and exit music for Sin has survived on disk; efforts are currently ongoing to recreate the music using a surviving list of Sin's music cues.)

So through the efforts of Yranski, The Vitaphone Project, the UCLA Film and Television Archive, and Warner Brothers, classic film fans are now able to see a most enjoyable outing with the vivacious Colleen Moore. I've been advised by many of my fellow movie buffs that I need to steep myself more into her output (I'll confess I have a heavy Louise Brooks and Clara Bow bias) and Why Be Good? was the ideal example to further explore Moore's work.

What I find so interesting about the film is while some might be tempted to dismiss it as a sticky-sweet confectionery trifle (the bouncy, up-tempo soundtrack music in the film is definitely of the late-1920s Jazz Age era, featuring performances of 'I'm Thirsty for Kisses, Hungry for Love' and 'Here Comes My Ball and Chain') the movie actually addresses serious issues that are surprisingly timely and contemporary.

Moore's Pert Kelly likes to go out and have a good time dancing (often with wild abandon), and she's very attuned to the fashion demands of the era, but her strait-laced father (John St. Polis) strongly disapproves of his daughter's behavior, implying she's a bit on the tarty side. Only Pert's mother (Bodil Rosing) remains convinced her daughter is a 'good girl.' Mr. Kelly plants a seed of doubt in Pert and the junior Winthrop's budding romance by insinuating she's punched a first-class train ticket to Strumpetville when she accepts a gift of fine clothes from Mr. Peabody.

Things aren't that much different in the Peabody household: Winthrop, Jr. desperately wants Winthrop, Sr. to meet the girl he's carrying a torch for but the senior Peabody is hesitant (despite having arranged for Pert to be fired from the department store so his son doesn't commit an infraction on that 'no fraternization' rule). 'If a girl falls for you,' Father tells Son via title card, 'she'd fall for somebody else.' It's a struggle for Pert, in that independence and liberation exact a terrible price summed up in the movie's title -- but she resolves the situation moments before it looks as if her and Winthrop's relationship is doomed: 'You men! You insist on a girl being just what you want...and then you bawl her for being it.'

At the risk of having to issue a spoiler alert, things eventually work out between the couple. (It's not an opera, folks -- it has a happy ending.) It's a marvelous showcase for Colleen Moore (who can turn the act of 'parking' her chewing gum on a door frame before she heads into the personnel manager's office into a delightful bit of business), and she's well-supported by a cast that includes a young Neil Hamilton (sure, we know him as Commissioner Gordon on Batman but he was also Jane's ex-fiance in the first two Johnny Weissmuller Tarzan movies).

Written by Carey Wilson (the writer-narrator-producer of many of the MGM 'Miniatures' short subjects) and directed by William A. Seiter (Roberta, You Were Never Lovelier), Why Be Good? is an absolute treasure for classic movie fans.