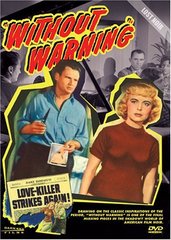 Where's That Been? - Without Warning!

A beautiful blonde woman has been stabbed to death in a seedy Los Angeles motel, and detectives Pete Hamilton (Edward Binns) and Don Warde (Harlan Warde) quickly deduce in their investigation the murder parallels a similar case that occurred a month earlier (namely, a blonde killed with a scissors-like instrument early in the a.m.). It looks as if the L.A. police are going to get a break on this one: the guilty man left behind a piece of his blue serge suit during his flight (torn on the hotel room door as he booked), and police chemist Charlie Wilkins (Byron Kane) suggests that the force start staking out tailor shops to see if the outfit is brought in for repairs.

The murderer is gardener Carl Martin (Adam Williams), who avoids detection after eavesdropping on a conversation at one such shop that his suit can't be properly repaired since he left a piece of it behind. So Carl moves on to other victims; one candidate is Jane Saunders (Meg Randall), a young woman with platinum tresses who works at the nursery run by her father (John Maxwell). Carl's modus operandi is to strike toward the end of the month (on the theory that he's just been paid and is ready to party) and thankfully, Jane avoids being Number Three when she has to put in overtime preparing bills for the nursery's customers. Instead, the unlucky victim is an unnamed blonde (Angela Stevens) who coyly invites Carl into her car after catching his eye in a nightclub. Carl kills her, and come morning he once again narrowly avoids capture: a pair of patrolmen investigate why Carl's parked in a car underneath a freeway bridge (with the dead girl), and he pistol-whips one of the men in blue (while engaging in a shoot-out with the other) before escaping in a produce truck.

With a bare-bones description of Martin, the police step up their investigative efforts: several blonde policewomen are called in to set up 'stings' in various dives through the city, and one of these women (Marilee Phelps) meets up with the suspect...thankfully, she is not harmed. Martin redoubles his efforts (after killing a fourth woman and leaving her near a riverbed) to do away with Jane after she stops by his place to deliver a rare orchid he's ordered from the nursery. Can the police get to Jane in time?

A taut little noir sleeper that was under the radar of many a classic movie fan for a number of years, Without Warning! (1952) was at one time thought to be a lost film until it resurfaced on DVD from Dark Sky Films in 2005. The movie was the sole project of Allart Productions (released by United Artists), an independent company whose further slate of releases sadly did not come to fruition. The producers of Warning!, Arthur Gardner and Jules Levy, later became minor television moguls as executive producers on the likes of The Detectives Starring Robert Taylor, The Rifleman and The Big Valley.

William Raynor, a publicist for the independent filmmakers known as the King Brothers, penned the story and screenplay for Without Warning, which was assigned to first-time feature film director Arnold Laven. Laven's directorial resume includes classics such as Vice Squad (1953), Down Three Dark Streets (1954), The Rack (1956) and Slaughter on Tenth Avenue (1957); he, too, would join Gardner and Levy in their TV ventures by directing/producing many episodes of their shows. In a 2009 interview with film noir historian Alan K. Rode, Laven acknowledged that much of Warning! was patterned after the earlier He Walked by Night (1948; Arnold worked on this as a script supervisor); the similarities are quite astonishing, with both movies emphasizing the procedural nature of police work (expending shoe leather to question suspects and track down leads) and the forensic science of crime detection, a concept just catching fire in movies at that time.

Laven emphasized that Without Warning! was not, however, influenced by a similar serial killer movie directed by Edward Dmytryk entitled The Sniper (1952), and the fact that both films were released on the same day (May 9) would seem to bear this out. (It's been speculated that Warning! was inspired by a real-life serial killer named Evan Charles Thomas, who was on-the-loose during the preproduction and filming of both movies.) Warning! was prepared on a fifteen-day shooting schedule (with three days of second unit work) with a total budget of around 0,000. For an inexpensively made film, Warning! features some impressive behind-the-camera talent, notably Academy Award-winning cinematographer Joseph F. Biroc, whose classic C.V. includes Magic Town (1947), The Killer That Stalked New York (1950) and Cry Danger (1951). Herschel Burke Gilbert composed the film score, and would later create themes for such television classics as The Dick Powell Theatre and Burke's Law.

However, Without Warning! does not spotlight a big-name cast. The most familiar face belongs to character great Edward Binns as Lt. Hamilton; Binns' distinctive voice is remembered from a multitude of radio and TV commercials, and you've no doubt seen him in such films as Beyond a Reasonable Doubt (1956), 12 Angry Men (1957) and Fail-Safe (1964; as the colonel piloting the plane scheduled to drop the bomb). (Binns also played a cop in the short-lived boob tube crime drama Brenner.) Interestingly, Ed also appeared in North by Northwest (1959), which is the movie most people remember Warning! star Adam Williams from (as one of two assassins after adman Cary Grant). Williams' other notable onscreen gigs include The Big Heat (1953; as Lee Marvin's sidekick) and The Lonely Man (1957).

During the late 1940s/early 1950s, Meg Randall was a Universal starlet known for her appearances in three of the 'Ma & Pa Kettle' movies: Ma and Pa Kettle (1949), Ma and Pa Kettle Go to Town (1950) and Ma and Pa Kettle Back on the Farm (1951). She does nice work as the damsel-in-distress, as do old pros like Harlan Warde, John Maxwell, Byron Kane and Robert 'Inspector Henderson' Shayne, seen here as a police psychiatrist. Warning! is not a perfect film -- its major debit is some rather obtrusive narration from the go-to guy for noir recitation, Reed Hadley -- but it's packed with some truly nail-biting suspense (particularly the climax), and provides an interesting travelogue for those interested in Los Angeles history (with scenes shot at the produce market, on the in-progress freeway and around Chavez Ravine before the construction of Dodger Stadium). It's the best seventy-five minutes you'll spend all year.