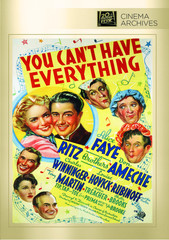 Where's That Been? - You Can't Have Everything

Comedy is subjective. What makes me laugh like a hyena succumbing to a tickling fit is liable to leave someone else completely poker-faced. With that in mind, classic movie fans are generally in agreement as to which funsters are considered the finest practitioners of mirth on the silver screen: Chaplin, Keaton, Lloyd, Laurel & Hardy, etc. Still, there'll always be one individual who's not afraid to state out loud: 'I don't find them funny.' (The odds are even money the person in question is my mother, by the way.)

It's been my experience that with regards to The Ritz Brothers -- Al, Jimmy, and Harry -- you're going to search high and low to find anyone who'll admit to being a fan. A friend of mine who's written several books on movie comedians, notably Bob Hope and Jerry Lewis, reacts to any mention of the Ritzes with all the enthusiasm of a root canal. But I can't help it: I enjoy watching the Ritz Brothers cavort on-screen even as I with the same breath acknowledge they're an acquired taste. (Mel Brooks once remarked that Harry Ritz was one of the funniest men he ever knew, so I can't be the only one.)

You Can't Have Everything (1937) was the trio's fourth feature film for 20th Century-Fox following three other musicals, Sing, Baby, Sing (1936), One in a Million (1936), and On the Avenue (1937). On average, the Ritz Brothers fare better in the Fox tune fests because their specialty act status necessitates that they don't have to appear onscreen all the time. It's only when the Ritzes take center stage in outings like Kentucky Moonshine (1938) or The Gorilla (1939) that their shtick gets wearisome for audiences.

The Ritz Brothers get second billing in You Can't Have Everything; star Alice Faye portrays Judith Poe Wells, an aspiring playwright 'down on her uppers' and hungrily devouring several plates of spaghetti at an eatery despite a lack of funds. She offers to wash dishes or sweep the floors in lieu of payment, but is pressed into performing the movie's title song with the diner's orchestra (which includes famed violinist David Rubinoff). Among those in attendance are George Macrae (Don Ameche), a tipsy playboy who successfully cranks out splashy theatrical musical comedies for a living.

Macrae thinks Judy has a great deal of potential as a performer, but Ms. Wells wants nothing to do with the type of entertainment she considers inferior to her serious dramatic play ambitions. (The Poe in her name refers to Edgar Allan -- she's his granddaughter!) Concealing his identity (George tells Judy his last name is Baker), Macrae arranges for producer Sam Gordon (Charles Winninger) to purchase her play despite the sheer awfulness of her literary efforts.

George and Judy's romantic relationship blooms when he persuades her to replace a temperamental actress (Phyllis Brooks) who's walked out on his latest production; Judy's not too enthusiastic about being associated with George's 'stupid musical comedies,' but she's snowed into believing that the proceeds from the production will go towards staging her own play. The couple's courtship runs into some interference from George's girl Lulu (Louise Hovick), who reveals to Macrae's surprise that the two of them were wed during one of his drinking binges!

You Can't Have Everything is an entertaining cotton candy of a musical. 20th Century-Fox always seemed to strike a balance between the gritty Depression-era tune fests produced at Warner Brothers and the more opulent productions that emerged from the stables of MGM. Everything was scripted by the triple threat team of Harry Tugend, Jack Yellen, and Karl Tunberg (character actor Gregory Ratoff came up with the story!), and directed by Norman Taurog -- a comedy veteran (Living It Up, You're Neve Too Young) who won an Academy Award as Best Director for his work on Skippy (1931).

As for the Ritzes, they play Winninger and Ameche's assistants, and when they're not clowning in a nightclub reprising 'You Can't Have Everything,' they provide additional hilarity performing a paean to long underwear and posing as charwomen to infiltrate the YWCA where Faye's Judy is staying. Harry, interestingly enough, winds up with the discarded Lulu by the time the closing credits of Everything roll. Everything was the film debut of the actress who plays Lulu, though you might know her better as ecdysiast Gypsy Rose Lee. ('Ecdysiast' is a fancy term for 'striptease artist.') Hovick would later appear in such Fox productions as Ali Baba Goes to Town (1937) and Sally, Irene and Mary (1938).

The chorus boy who performs 'The Loveliness of You' in Macrae's musical is portrayed by Tony Martin, who married Alice Faye shortly after filming You Can't Have Everything. (Their marriage was short; the couple divorced three years later.) Other familiar character faces in You Can't Have Everything include Arthur Treacher (here's a stretch -- he plays Ameche's manservant), 'Wild' Bill Elliott, Clara Blandick, Si Jenks, Robert Lowery (as the co-pilot on Faye's plane near the end), and the dance trio of Tip, Tap, & Toe. One of the musical's highlights is Alice's rendition of 'Danger, Love at Work' -- which she sings with gusto accompanied by Louis Prima and his orchestra (with second banana Wally Vernon as the master of ceremonies).

Not long after the Ritz Brothers completed what fans believe to be their finest hour onscreen -- The Three Musketeers (1939), which also stars Don Ameche -- the trio left Fox for Universal and continued their reign in B-musicals with vehicles like Behind the Eight Ball (1942) and Never a Dull Moment (1943). You Can't Have Everything showcases the comedic brothers at their very best: three hard-working clowns willing to do anything for a laugh.