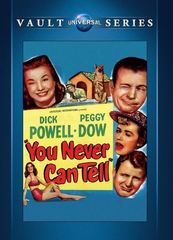 Where's That Been? - You Never Can Tell

It comes to us all in the end. Tycoon Andrew Lindsay of Lindsay Bakeries fame ('Everybody wants a Polly Cracker') has departed this world for a better one, leaving million to his faithful German Shepherd, King. The executrix of the Lindsay holdings is the millionaire's faithful secretary Ellen Hathaway (Peggy Dow), who certainly has her hands full dealing with every con man coming out of the woodwork trying to get their lunch hooks into all that canine largesse. One such individual is would-be oilman Perry Collins (Charles Drake), who's able to charm his way into Ellen and King's lives on the basis of his being an old acquaintance of King's -- they were in the Canine Corps together during their hitch in the military.

Things start to get serious between Perry and Ellen and you've every right to be suspicious about Collins; he's got an incentive since in the event of King's demise Ellen gets all that sweet, sweet cracker cash. Sure enough, King is poisoned by an unknown assailant (a generous hunk of meat dosed with deadly stryccolin) and suspicion soon falls upon Ellen as the culprit.

King ascends into an animal Purgatory known as Bestiatory, and though he's destined to be welcomed with open -- er, paws -- he asks King Cohab, ruler or Bestiatory, for permission to return to Earth and take care of that unfinished business. You see, King knows who poisoned him, but he's anxious to clear Ellen's name. So the dog is sent back in human-like form (or what the denizens of Bestiatory call 'hum-animal') as private detective Rex Shepard, with a reincarnated horse (Joyce Holden) known as Golden Harvest (Goldie to her friends) along to keep an eye on him. His old Army sergeant Collins is the one who did the dirty deed, the tricky part is convincing Ellen without tipping her off as to how he knows.

Veteran screenwriter Lou Breslow (Mr. Moto Takes a Chance, Murder, He Says) directed his only feature film in 1951 with the delightful fantasy comedy You Never Can Tell; it wasn't his first foray in the director's chair (he oversaw a few shorts in the 1930s, most notably Punch Drunks with The Three Stooges) but it never really led to future big screen jobs (Lou would have to settle for TV work on shows like Target and Mackenzie's Raiders). Breslow also wrote the story and screenplay (with an assist from David Chandler) for this neglected little gem that benefits greatly from a fine performance by star Dick Powell.

In his career as a tough guy, Powell was helped immeasurably by his experience as Resident Chorus Boy in those Warner's musicals in the 1930s; it added a sweetened appeal to his hard-boiled persona that kept him from being obnoxious. Much of the laughs in You Never Can Tell come from how the gumshoe conventions are turned on their head through a canine's perspective; for example, when we're first introduced to 'Rex Shepard,' Rex opens up one of his desk drawers and instead of the requisite bottle of the hard stuff we find a bag of doggie kibble. Powell engages in some delightful dog-like mannerisms (there's a nice scene where he starts scratching himself behind the ears then stops when he realizes what he's doing) that came courtesy of vaudeville veteran Bert Granville, who had been imitating pooches on stage and on the radio for nearly twenty-five years.

At the time of You Never Can Tell's release, Powell was also the star of radio's Richard Diamond, Private Detective -- a crime drama whose main character Dick seems to be drawing inspiration from (the titular shamus would often lighten the mood by crooning a song to his lady love at the end of each broadcast). The old-time radio influence is also present in the casting of some of the supporting players; the most recognizable is Frank Nelson, who plays it straight here as the police lieutenant investigating King's murder (Nelson is best known as the obsequious sales clerk who tormented Jack Benny on his long-running radio and TV series, but he, too, worked on a radio detective series in Jeff Regan, Investigator.)

You might also catch Frank Gerstle as one of Nelson's fellow detectives, and the man who tries to sell Peggy Dow's character a model dog house is Olan Soule, who did a great deal of acting in front of a radio mike as well as appearing on such TV series as The Andy Griffith Show and Dragnet. (He's not identified on IMDb, but the actor who voices King Cohab sounds a lot like Roy Glenn, a veteran of both the Benny program and Amos 'n' Andy.)

Dow acquits herself nicely in the ingenue role, and I ask that you not be upset about revealing the identity of King's murderer (we're given the identity of the guilty party about a third of the way into You Never Can Tell) because Charles Drake is the guy who left Shelley Winters at the mercy of marauding Indians in Winchester '73 (1950), so you always have to watch him closely. If you caught any of the 'Rusty' features (a series produced at Columbia from 1945 to 1949) on Turner Classic Movies you'll recognize it's the same dog (his real name is Flame) who plays the part of King.

But the standout in the supporting cast is inarguably Joyce Holden, who's a joy as Goldie, the reincarnated form of race champion Golden Harvest. Goldie spends a lot of time at the racetrack in You Never Can Tell, betting on various relatives (there's a subtle joke that her efforts have netted her a nice little nest egg of 00 which she'll have no use for where she's going) and giving Rex much needed advice in his task of proving Ellen's innocence. One of the highlights in You Never Can Tell finds Goldie chasing after a bus (that's headed for the track) and as she runs alongside the vehicle, banging on the door to be let in, the bewildered driver (played by Tom 'Heil myself!' Dugan from To Be or Not to Be) glances at his speedometer to see she's doing forty miles an hour! 'Lady,' driver Dugan manages to get out, 'anyone who can run like that don't need no bus!'

You Never Can Tell accentuates its amusing script and fantasy elements with some simple but effective special effects; one of the most striking is the depiction of Bestiatory (filmed in negative exposure), which is similar to the 'land of the dead' sequence in Darby O'Gill and the Little People (1959). (To demonstrate there's no movie connection I won't touch, the actor who plays Darby, Albert Sharpe, has a small role in You Never Can Tell as Ellen's Grandpa Hathaway.)

In the early years of the USA Network, You Never Can Tell was a mainstay of the cable channel's movie library, and the film also made the frequent rounds on the late, lamented American Movie Classics as well. It had been close to twenty years since I last saw this movie, but with its release on manufactured-on-demand DVD in October 2013 as part of Universal Vault Series I no longer have to ask 'where's that been?'