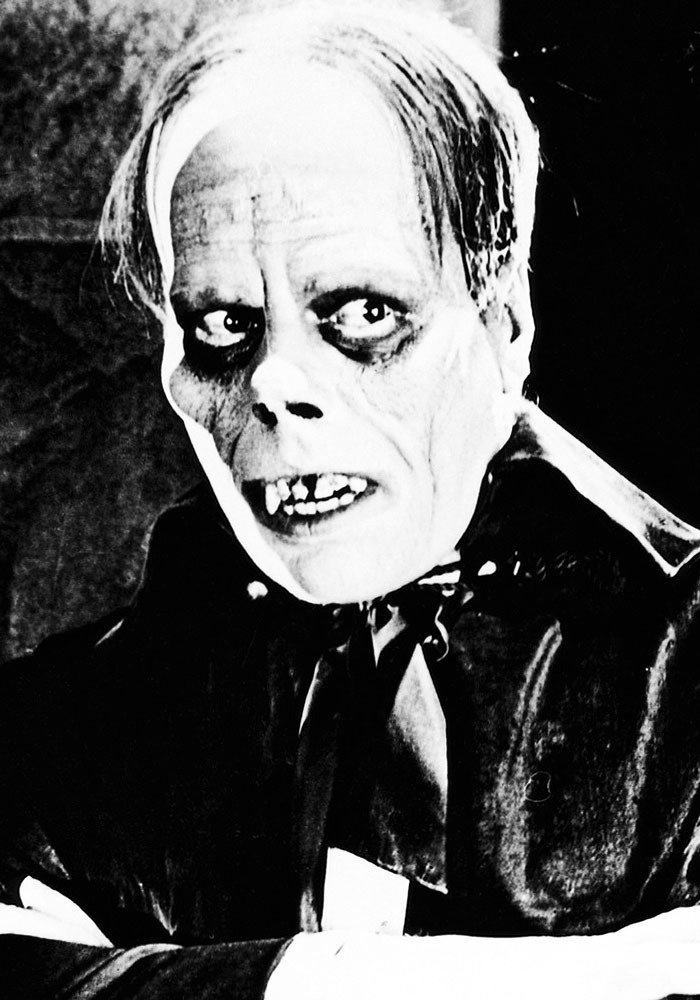 Zero at the Bone: Chilling Moments in Classic Films

My article title comes from Emily Dickinson; it is how she described the feeling of coming upon a snake as it slid past her in the grass. It is a feeling film makers have produced in willing audiences since the silent days. With its sensory presentation, film is the perfect medium for the thriller. While we often date the modern thriller from the premiere of Psycho in 1960, movies had been scaring the socks off people for half a century. In 1910, in fact, there was a one-reel Frankenstein with Charles Ogle as the freakish Monster.

My father always said the scariest moment in his life was one night around Halloween of 1932 when his brother jumped out of a darkened doorway and grabbed him. They had been to see Bela Lugosi in Chandu the Magician, and the movie had thoroughly unnerved him. Seen today, Chandu (the feature) is artificial and hokey, but to a suggestible nine-year-old its images of torture cells with collapsing floors, the victims holding on desperately to avoid the abyss, miniaturized doppelgangers, and a man locked into a mummy's coffin and tossed into a river were mesmerizing.

This piece visits horrifying highlights of six films from the studio era. Because spoilers do the most damage when they give away plot twists in thrillers, I'll list the films here: The Phantom of the Opera (1925), Star Witness (1931), The Mummy (1932), Treasure of the Sierra Madre (1948), Border Incident (1949), and Bad Day at Black Rock (1955).

The Phantom of the Opera: The Unmasking

Erik the Phantom is Lon Chaney's most famous role, and the scene in which Christine (Mary Philbin) pulls off his mask gave audiences in 1925 a heart-stopping jolt. Ninety years later, it retains its power; despite the fact first-time viewers today have no doubt seen stills of Lon in his Phantom make-up. It is a death's head, sunken, corroded, with piercing eyes, and, on film, it is animated by Chaney's empathic acting.

The unmasking scene is a fine piece of editing. Christine, imagining a mystery lover, reaches toward the mask, pulls back her hands, and then completes the action. We see Erik's face a moment before she does, for her face is lit with its final moment of romantic thrill. The he turns and she sees what we have seen, the bleached skin, cratered eyes, the squat nose and snaggleteeth. A face of horror. Once we have seen that ravaged face, we fall under the power of Chaney's performance, and the menace is merged with the emotional torment the Phantom suffers.

The film has its detractors, including the leading authority in all things Chaney, Michael F. Blake, who, while praising Chaney, calls it a 'mediocre melodrama.' He criticizes Philbin's acting and the direction of Rupert Julian. Chaney buffs wonder what Tod Browning would have done with the script, in pacing, stylization, and punching up the set pieces.

I share the high regard that such modern critics as Leonard Maltin, Robert K. Klepper, and Peter Kobel have for the film. Lon Chaney makes the film work. His performance overrides the picture's defects.

Star Witness: Terrorized by a Mob

In this Warner Brothers crime thriller, a gangster (Ralph Ince) wages a war of terror on a family that witnessed a murder he committed. It has been years since I've seen the film, but the scene in which Ince's gang kidnaps and assaults the head of the family is unforgettable. They all but beat him to death. I believe Grant Mitchell is the victim, playing a civilized middle class family man. In one startling shot he is picked up by the legs and swung head-first into a wall. Even by Pre-Code standards, it's explicit. The film's grimness persists, even when chucklesome 'Chic' Sales, as the family's fearless Grandpa, takes on the mob.

Ince is terrifying. He lacks the magnetic qualities of mobsters played by Cagney, Robinson, and Muni. He's charmless, pure evil, and he succeeds by creating brute fear in his victims. When he says he'll 'use your guts for wallpaper,' he means it.

The Mummy: Returned to Life

Boris Karloff is Frankenstein in the same way Weissmuller is Tarzan and Lugosi is Dracula: definitive, the standard against which we judge all others. But his work in The Mummy is just as thrilling. If years have passed since you've seen this, it repays to give a second viewing with Karloff's tightly controlled performance, Karl Freund's direction (in his debut as director), Charles Stumar's photography, and Jack Pierce's makeup. It's a horror film with a potent subplot of tragic love. Flashbacks, actually hypnotic visions, show us how Imhotep defied the gods in pursuing his love of a vestal priestess. As punishment, he was mummified alive -- a stunning scene, as his face is wrapped, leaving only his eyes staring out.

The mummy's awakening takes place in modern times as a young archaeologist (Bramwell Fletcher) translates a papyrus by lamplight. Behind him, Karloff reclines in his coffin. The mummy's eyes, which are nearly closed, gleam. One arm falls loose through the wrappings, then the other. The absence of music adds to the skin-crawling effect.

Cut to the papyrus. Imhotep's hand drifts over it. Fletcher gives a startled bark, and then bursts into maniacal laughter. He has become a madman. The mummy's exit from the burial chamber is shown in a shot of two winding cloths dragging across the floor. Freund masterfully provokes our dread by limiting our view of Imhotep. The film's power develops from these choices and Karloff's restrained intensity. The Mummy elevates its genre.

Treasure of the Sierra Madre: A Psychopath in Firelight

Treasure is one of the richest of movies. Early on, one is engrossed in the struggles of Dobbs (Humphrey Bogart) and Curtin (Tim Holt), two down-and-outers who have hit the skids in Tampico. They team up with a grizzled prospector, Howard (Walter Huston), and trek out into the mountains after gold. Midway in, the film depicts Dobbs' descent into paranoia. He believes Howard and Curtin are out to grab his share, and his violent streak surfaces culminating in a hair-raising scene out in the desert, where Curtin and Dobbs have camped for the night.

Dobbs is now completely over the edge, grimy, shiny-eyed, and itching with animosity. He tells Curtin (who has the only gun), he knows Curtin wants him dead, and only one of them can live. He taunts him by observing sleep will claim one of them, and that man will be at the mercy of his partner.

Bogart is a wild man in this scene, and the firelight makes it a nightmare. No one watches it without imagining himself in Curtin's place, stuck in the wilderness with a madman. Curtain must fight off sleep, although he is exhausted, or shoot the unarmed Dobbs, although he considers himself a decent man. Ironically, we earlier saw him resolve with Dobbs and Howard to murder an interloper.

Sheer dread hangs over the scene and its jarring conclusion. Compare it with many a contemporary thriller, and it's clear director and screenwriter John Huston did not need a license to show explicit gore to terrorize an audience. Dobbs' murderous anger chills an audience to the bone.

This Anthony Mann thriller follows government agents George Murphy and Ricardo Montalban on the trail of a gang smuggling migrant workers into the country. One does not expect an MGM action picture to emphasize brutality, but it came out in late 1949, after a year of Dore Schary as production head. Schary green-lit stories Louis B. Mayer found repugnant.

Because Border Incident is the least familiar film on my list, I won't describe its pivotal scene. How it happens, and who it happens to, make it a singular, noirish moment in MGM history. It would be gasp-provoking in any decade. Coming from the proudest and most tradition-bound studio, it signals the changes occurring in audience expectations and film makers' ambitions.

This terrific little picture, with a 78-minute run time, has Spencer Tracy arriving at a whistle stop in the desert to investigate the disappearance of a war buddy's father. He comes to realize the town (actually just a row of weathered buildings) is hiding a deadly secret. Three belligerent men dog his steps: Hector (Lee Marvin) is mulishly stupid and aggressive; Coley (Ernest Borgnine) is a murderous slob. Holding them both on a chain, but just barely, is Smith (Robert Ryan), played with flinty eyes and curt, contemptuous speech. Tracy is caught like Curtin at the firepit, but here he has three men looking for a chance to kill him, with no one brave enough to take his side.

Everyone who sees this remembers the chili scene. Tracy sits in the town’s little diner and orders a lunch. His three enemies show up. Coley gets in his face and begins to provoke him, forcing him to change seats, dumping ketchup into his chili, and braying, 'I'm half horse, half alligator. You mess with me and I'll kick a lung out of ya!' Borgnine is matchless in this scene, the most terrifying bully imaginable. When violence erupts, it is choreographed compactly by the director, John Sturges, the edits falling like the karate chops Tracy hands out. This is a classic fight scene.

While Borgnine is all brawn and stupidity, Robert Ryan is a scarier opponent, and Tracy faces him in the film's climax. Ryan with his rifle proves far more dangerous than Hector and Coley. Ryan is a master of the hard gaze, the eyes locked in cold, pitiless appraisal of his victim. In classic films, psychological horror can be the most devastating horror of all.