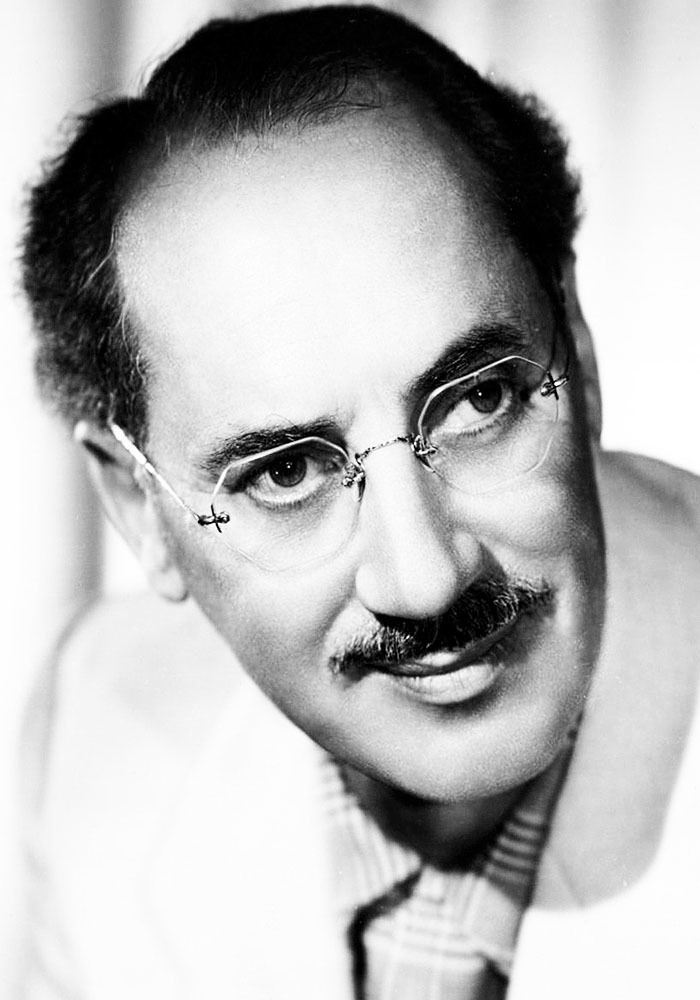 Vintage Groucho? You Bet Your Life!

Contestant: I'm a cartoonist...I'm working on a comic strip.

Groucho: If you want to see a comic strip, you should see me in the shower.

You Bet Your Life was on radio from 1947 and a TV series from 1950 to 1961. Groucho Marx resisted the concept at the start. After a legendary career with his brothers on stage and in films, the role of quizmaster seemed paltry. It must have looked like a career downturn.

But Groucho made it a quiz show like no other. It showcased his quicksilver wit, the speed and accuracy of his ripostes, and the loony improvisations he created when the mood struck. Considering the unsatisfactory movies he was offered in these years (Copacabana, Double Dynamite, A Girl in Every Port, The Story of Mankind), we are lucky to have hours of pure Groucho in old episodes of YBYL. It is one of the glories of '50s TV.

The show's pleasures are many. It works as a game show, sort of a '50s Trivial Pursuit. There's George Fenneman, the straight arrow announcer, always with clipboard in hand, clearly having the time of his life as Groucho's straight man. And there are the guests, a fascinating cross-section of society, who tell their stories in the interview section of the show. Because Groucho's support of civil rights was passionate, the guests included minorities and foreign nationals.

Most of all, there's Groucho. Wagging his cigar, batting his eyebrows, and gazing at the audience as he times each zinger; he has the instincts of a master comic. He interviews each pair of contestants with unfeigned interest, but finds double meanings in their answers. He has an inexhaustible fund of puns, double entendres, show biz trivia, and song fragments. Each interview is shaped like a routine. He frequently ends with an encircling move, referencing a key detail from earlier and twisting it into his final quip.

Groucho plays up to the young female contestants, reprising the lothario he played in his films. The show was filmed and edited from a full hour down to the 27 minute broadcast print, enabling the producers to edit out Groucho's saltier comments, although some snuck through.

Each collection is a three-disc set, with six episodes per disc, and many extras, including pilots of game shows that were proposed to Groucho as follow-ups to YBYL, radio broadcasts, and outtakes. Each disc includes one of the fabled collections of censored moments that were shown at sponsor's conventions. (They are tame by today's standards.)

Here are highlights of The Best Episodes.

Disc 1: Groucho's daughter, Melinda, appears with her schoolmate, Candice Bergen (age 11). They sing 'A Simple Melody' while Groucho sings counterpoint. Edgar Bergen steps out, and the dads join the daughters to play the game, with Fenneman asking the questions.

Hoot Gibson appears in a show from 1955. He and Groucho joke about their ages and whose career goes back the farthest.

Songwriter Harry Ruby appears and sings with Groucho. In another episode on this disc, Groucho goads Fenneman into singing Ruby's 'Hooray for Captain Spaulding,' and fills in what Fenneman can't remember.

Johnny Weissmuller appears, and Groucho asks for the Tarzan yell. Johnny obliges, and gives two respectable yells. This should put to rest the ridiculous story that it wasn't Weissmuller doing the yell in the movies, but some sort of trick audio track. This same show has some extended deviltry when Groucho interrupts Fenneman over and over in the middle of his introduction, delaying the next round of the game.

Harpo does a gag appearance in a 1961 show. He gets Fenneman to hold his leg and tries to shanghai a female contestant.

Disc 2: Joe Louis is a guest in a 1955 show where he shares childhood memories and career highlights with Groucho.

In a 1957 episode, a female contestant who clearly has a crush on Fenneman awakens the imp in Groucho. He interrupts the quiz to have her kiss Fenneman, then her quizmate, and finally Groucho himself.

An English guest inspires Groucho to sing an entire song in Cockney.

Antonio Cappasola, an organ grinder, appears on the show, and goes round and round with Groucho on how to pronounce his name. Cappasola has a comic touch. You'll think you're watching Groucho spar with Chico. His monkey appears, dressed as Groucho, and does the Groucho walk.

Harpo and Chico do a home permanent commercial with swing music.

Disc 3: Groucho has a go-round with another Italian American and gets even deeper into Chico territory.

Phyllis Diller guests in her first TV appearance. In a commentary recorded almost 50 years later, she watches herself and reacts hilariously ('This is before my face got fixed. I look like a bird!').

Groucho duels with a fencing instructor and invents a dozen bits of physical comedy during the match.

Teen actress Joy Harmon appears in a 1960 show, leading to this:

Groucho: Could you do the cheerleader thing that you did?

Harmon: Can I take my shoes off?

Groucho: Take everything off. This is America.

Highlights from The Lost Episodes:

Disc 1: The 1950 TV premiere of YBYL features a highly animated Groucho performing in shirtsleeves and has this priceless exchange:

Contestant: He (her future husband) didn't pay any attention to me for a long time...One day he finally noticed me for some reason or other.

Groucho (pounces): What was the reason?

Groucho (gazing into space): I know. But I won't tell ya.

Ramiro G. Gonzalez, whose halting English comes off like a Bill Dana routine, absolutely slays in a 1953 appearance. He was soon in demand as a game show contestant and character actor.

Ernie Kovacs is called up from the audience in a 1958 show. His nonstop run of silly comments inspires Groucho to heights of whimsy.

Disc 2: This disc is light on celebrity guests, but Groucho finds comedy in every sort of person. 11-year-old Melvin, with apple cheeks and a fendertop haircut, tells Groucho his mother does nothing all day, but 'she takes care of the four kids.' Groucho interviews a female stunt double who remembers drowning twelve times for Bette Davis in A Stolen Life. He interviews umpire Jack Powell.

Groucho: What are the requirements for an umpire?

Powell: An umpire must have honesty, integrity, good eyesight, and plenty of intestinal fortitude.

Groucho: Wouldn't it help if you knew a little about baseball?

Bill Lasky, son of Jesse Lasky, Groucho's old boss at Paramount, appears. Fifties Tarzan Gordon Scott guests in a 1955 show and discusses winning the part in a field of 2000 hopefuls. When Miss Sweden appears in a 1954 episode, Groucho's wolf persona goes into overdrive ('Kiss me, you fool!') but the young woman is clueless about most of Groucho's patter. Finally, for those who have always wanted to see a bare-chested Art Linkletter, he does a gag appearance in a lineup of body builders and falls victim to a Groucho zinger: 'I think the one on the far side is a woman.'