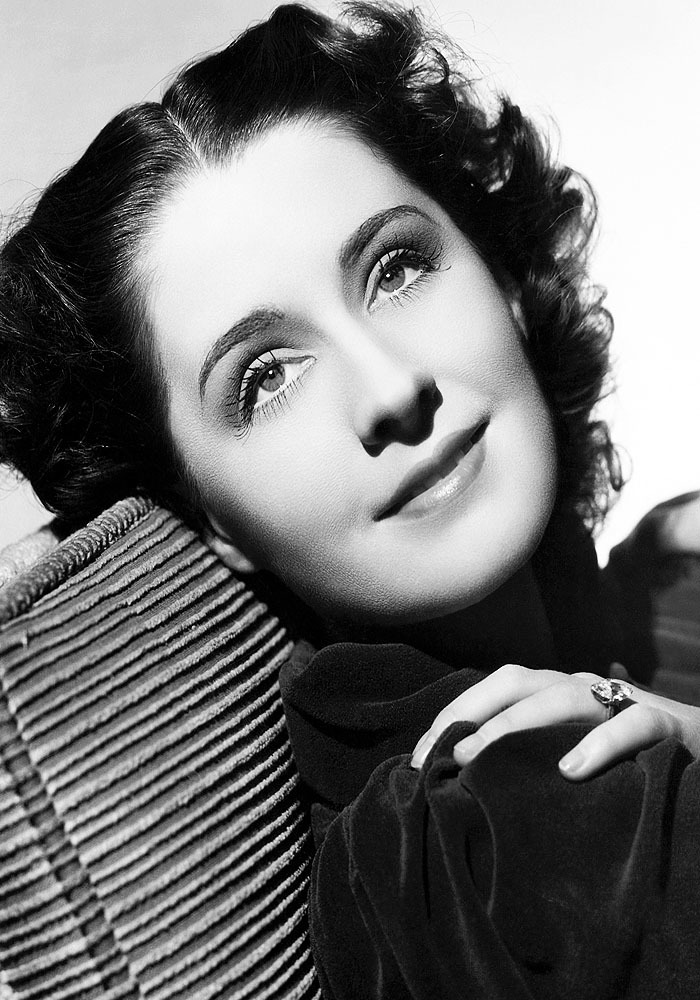 Norma Shearer is on the short list of MGM's iconic actresses, sharing a rarefied stratum with Garbo, Crawford, Harlow, and Garland, but she is the least remembered out of all them. Non-buffs know little or nothing about her. For decades her films were seldom screened or broadcast. Yet she was a top box office draw in early sound and had one of the best-managed careers of the studio era. TCM and DVD reissues have brought her triumphs back to us, and her fans today are as ardent as those who idolized her 80 years ago.

Norma was sleek. In many films, her coiffure is a simple bob pinned back, showcasing her aristocratic features. Her ladylike bearing creates an interesting tension in her more provocative roles. She was a glamour star, yet in key scenes in Let Us Be Gay and Marie Antoinette, she appears with minimal makeup, to devastating effect in the latter film. Latter-day critics, notably Pauline Kael, found her mannered, but Norma's acting gained in nuance in the second half of her career. She strikes stagey postures in some scenes, but she also brings off keen, emotion-filled line readings, sometimes simultaneously.

Her film career began with bit parts in 1920; she can be glimpsed in D.W. Griffith's Way Down East. She was a featured player by 1922, and a leading lady by 1924, co-starring with John Gilbert in He Who Gets Slapped, MGM's inaugural film. Norma's marriage to production chief Irving Thalberg in 1927 positioned her for her greatest years in film.

Norma's sound career ran from 1929 to 1942 and comprises twenty features. In those same 13 years, Joan Crawford made 35 films, Claudette Colbert 40, Carole Lombard 43, and Bette Davis, who didn't start in films until 1931, made 49. Norma's roles were carefully selected and prepared. While he lived, Thalberg found properties for her that extended her range and stressed both commercial and artistic values. Among her twenty sound features, we find her in edgy dramas (The Divorcee, A Free Soul), biography (The Barretts of Wimpole Street), historical epic (Marie Antoinette), adaptations of Broadway hits (The Women, Idiot's Delight) and ambitious stage adaptations by Noel Coward (Private Lives), Eugene O'Neill (Strange Interlude), and Shakespeare (Romeo and Juliet).

The novice viewer should start with one of Norma's prime vehicles, where her star power is supported by high caliber co-stars and MGM swank, as in Barretts, Romeo and Juliet, or Marie Antoinette. One who falls under Norma's spell in these settings will want to see the rest of her films.

Here are some high points of Norma's career, from the titles that are commercially available:

Silent Norma: Less than half of Norma's silents are known to exist. He Who Gets Slapped (1924) is well worth seeing, but she and John Gilbert are clearly in the shadow of Lon Chaney as a circus clown with a ghoulish agenda. Lady of the Night (1925) is silly stuff, with Norma playing a double role as bad girl/good girl. It's entertaining hokum, but hokum nonetheless. A Lady of Chance (1928), her last silent, works on its own terms as a tongue-in-cheek con game story, with Norma as a cool-witted embezzler on the prowl for gullible men.

The Divorcee (1930) has Norma's Oscar-winning performance, but not nearly her best acting. Much more subtle, measured performances were a few years ahead. See this one for a 1930s take on adultery, divorce, and the double standard. Norma has a classic moment when she informs her husband (Chester Morris) that she, too, has had an affair: 'I've balanced our accounts.' This was provocative stuff 85 years ago. An added attraction: Robert Montgomery as the ultimate playboy and cad.

Private Lives (1931) sees Norma and Robert Montgomery star as a couple who divorce, remarry others, reconnect, then carry on a volatile verbal and slapstick relationship. There are wonderful close-ups of Shearer in the balcony scene, and the couple's fight scene, in which they demolish a hotel suite, is hilarious. Private Lives stands with the best romantic comedies of the '30s.

Strange Interlude (1932) is a fascinating Hollywood attempt to film O'Neill, although the playwright is said to have loathed it. This is the play in which the audience hears what the characters are thinking at key moments. Shearer is at the height of her beauty. Her appearance in a belted raincoat and cloth bonnet must have sent women running to the outerwear racks. She plays Nina, a woman stuck in a loveless marriage with a man who may be insane. An unforgettable moment is when Nina's mother-in-law (May Robson) tells her women must pick their husbands like livestock farmers pick breeders. Strange Interlude also has Clark Gable, rather stiff as the doctor who knows Nina's secrets and loves her. (As a chaser to this film, watch the Marx Brothers' Animal Crackers, in which Groucho spoofs O'Neill's interior monologues.)

Smilin' Through (1932) is the ultimate tear jerker, a tale of doomed love that haunts the survivor. It was a huge hit, and with Sidney Franklin directing, and Fredric March and Leslie Howard in support, it is perfect for those who love Hollywood's romantic escapism.

The Barretts of Wimpole Street (1934) has Shearer teamed up with March again, as Robert Browning. This is the story of Browning's courtship of Elizabeth Barrett, and the opposition they face from her father (Charles Laughton, in a scene-stealing performance). Norma shows Elizabeth's growth from a submissive daughter to a woman of resolve with father and daughter having a climactic showdown. This makes a nice bookend to Olivia de Havilland and Ralph Richardson's psychological struggle in The Heiress. Barretts is a triumph for the cast and the production team.

Film guides often point out that Leslie Howard (Romeo) was 43 and Shearer (Juliet) 36 when Romeo and Juliet (1936) was made. Most viewers won't care -- and there is the old theatrical adage that an actress must be at least 30 to understand Juliet. Contemporary critics expected a fiasco, but the consensus was that the cast, especially Shearer, brought off a strong version of the play, with intelligent readings and a strong emotional charge. Today's viewer may feel the veteran actors (John Barrymore as Mercutio and Edna May Oliver as Nurse) run off the rails, but not the two leads.

Marie Antoinette (1938) is lavish. MGM sent buyers to Europe for antiques, and Norma wears over two dozen gowns in the picture, besides pounds of jewelry, crowns, and elaborate coifs. At the same time, Marie builds to emotional flash points. Its long detailing of Marie's strange marriage to Louis XVI (Robert Morley) culminates in keenly felt moments: Shearer's stricken look as the royal family is recognized in their attempted flight from France; Louis' visit with his family in their prison cell on what he and Marie, but not the children, know is the eve of his execution; the scene where the revolutionary guard come to take away her children; and the shattering denouement. And there is Tyrone Power, in the bloom of youth, as the Swedish count who strives to save Marie.

Shearer leads the cast as a smart modern woman confronted by adultery and vicious gossip in The Women (1939). Surrounded by comic chatterboxes (Rosalind Russell, Mary Boland, Phyllis Povah) and foxy seductresses (Joan Crawford, Paulette Goddard), she has the straight dramatic role, and she builds sympathy for her character in tender scenes with her daughter (Virginia Weidler) and war councils with her mother (majestic Lucile Watson). The film is an ideal showcase for late-career Shearer, sophisticated and self-assured. Classic scenes include Shearer learning of her husband's cheating from the prattle of a bird-brained manicurist (Dennie Moore); the showdown with Joan Crawford in a fitting room; and her declaration of war on her catty enemies: 'I've had two years to grow claws, Mother! Jungle Red!' The Women is a must-see.

After The Women, there were three more films for Shearer: the wartime suspenser Escape (1940) and two fluffy comedies, We Were Dancing (1941) and Her Cardboard Lover (1942). Then, like Garbo, Shearer left the field, leaving her fans with many fond memories. She deserves rediscovery by new generations of film buffs.