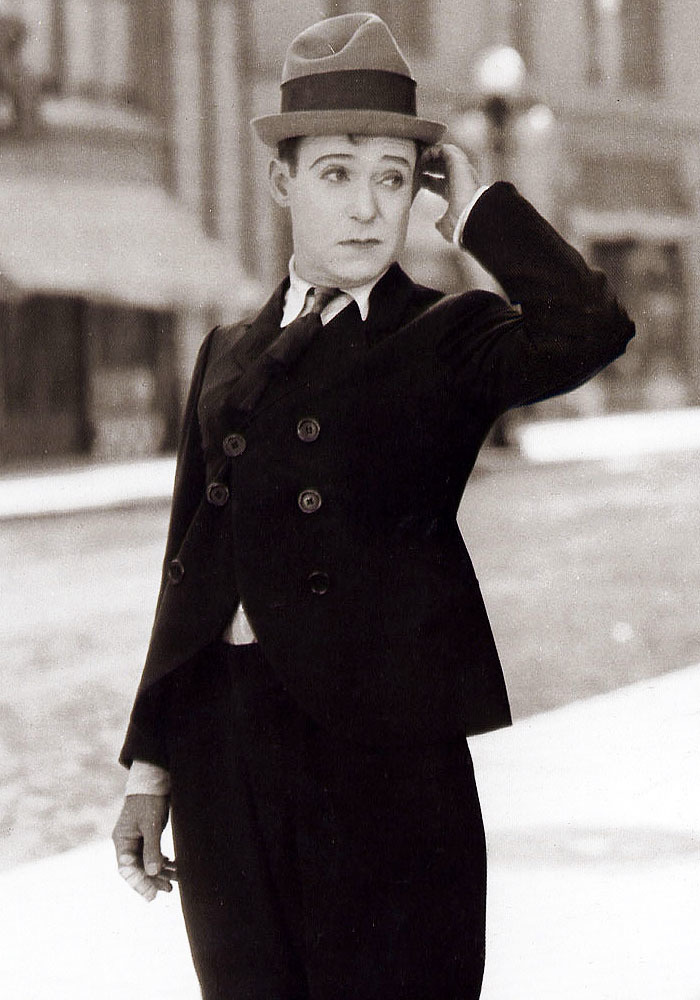 Our story so far: on September 5, 1949, Life magazine published a cover story entitled Comedy's Greatest Era, by James Agee. Virtually overnight, twenty years after its heyday ended, great silent comedy as a genre was rediscovered and placed on a pedestal that's been revisited by each ensuing generation. Agee's article crowned four Kings of Silent Comedy; we previously looked at Chaplin, Keaton, and Lloyd; in this concluding article, we'll turn to the one that's frequently cited as a precautionary tale on ego and movie stardom: Harry Langdon.

Langdon (1884-1944) hailed from Iowa, and found work as a performer drawing crowds for medicine shows, performing as a carnival acrobat, whatever he could find in front of a group of people. Eventually, he and his wife Rose worked up a vaudeville sketch in which he buys a new car over her objections; the car then proceeds to fall apart, explode, catch fire, run up the wall, etc. Sounds like a funny act, and they played it for years. Eventually, he got noticed by the movies, and settled in with Mack Sennett.

The short version of his story after that: His first five films were pilot movies or unreleased, and it was actually his sixth film that was the first to hit theatres. He left Sennett, graduated to features, did very well thanks to writer/director Frank Capra, decided he was Chaplin, fired Capra one morning, and by noon that day Langdon was washed up. He spent the rest of his career, not as Chaplin, but as Buster Keaton, appearing in Poverty Row shorts, supporting bits in features, Columbia 2-reelers, and writing Laurel & Hardy gags.

Well, that's SORT of his story. Many Langdon fans and historians are adamant that despite what Capra always said about Harry, Langdon had his own screen persona before Frank, and that his firing of Capra wasn't as detrimental to his career as his own ego was. They find value in some of his later work, and decry he didn't live long enough to be rediscovered.

Obviously, when you fire Frank Capra, you've done something not good for your films, generally speaking, and Langdon's fall was so fast it was more like a train wreck than a career downturn. Of course, part of that was the rise of talkies, and Harry's character isn't so much childlike in talking pictures, he's moronic in a way Laurel & Hardy really aren't.

They're simple, but not mentally impaired. Some of Langdon's '40s work, though, is quite good: I liked him in the few Columbia shorts I've seen him in, and in a feature called House of Errors where he was good enough that he might've had a career on into the TV era had he lived past 60.

Harry is an acquired taste, but when this was made (early 1926) I'd rank him behind Chaplin and Lloyd but ahead of Keaton (by a hair) in the comic hierarchy based on the quality of his films and how much they induce laughter.

There's a nice collection of his surviving silent shorts called Langdon Lost and Found; he typically played a child-like character who survives against impossible odds because he never seems to fully comprehend what danger/trouble he's in. It's the way Harry reacts (or doesn't) that makes this stuff so funny: a tree falls right in front of him? He stands there and looks at it for a couple of beats, finally comprehends the darn thing almost fell on him, and THEN jumps ten steps backward. See His Marriage Wowfor the best of the Langdon shorts.

In any case, let's pick up his tale when Langdon moved into features. His first (1925), directed by Harry Edwards, is called Tramp, Tramp, Tramp.

The Big Ginormous Shoe Company is gleeful about putting smaller mom-and-pop shoe companies out of business, and Harry and his Dad are one such company. When the large Shoe outfit sponsors a cross-country walk from Massachusetts to California to promote their shoes, Harry registers for the race to win the 5,000 prize - and to impress the beautiful woman on the shoe company's billboards, Joan Crawford, who's the daughter of the Ginormous Shoe Company president. Oh, and Harry's main competition in the race is the landlord threatening to evict him and his dad! And they're off....

The plot is the clothesline on which hang the gags, and Harry gets sidetracked on a prison road gang, on a fence dangling over the Cliffs of Insanity, and by a cyclone. Harry's character exists on a different plane of existence from the rest of us, a beat off, a page behind, and aware of what to react to and how to react but not quite certain when to do it. Invited to join a girl on a park bench, he sits everywhere else in the park BUT on the bench, looking at the girl each time to see if what he's doing isn't really what she meant for him to do. His influence on Laurel & Hardy and on Buster Keaton (watch this cyclone scene and you'll see) is obvious.

I find it interesting that the film does so little (more like 'nothing') with some comic opportunities; they introduce the evil landlord, then tell us he's the 'World's Champion Walker' and Harry's main rival for the prize, only to do nothing with that. That Miss Crawford is the daughter of the owner of the shoe company putting Harry's out of business and yet is canoodling with him is ignored as well. But that all somehow seems apropos; Harry is sort-of a real person, but really just a poor imitation of one; the film's plot is there, but only as an excuse for us to be able to enjoy some laughs.

Next up was The Strong Man (1926), Capra's first directorial credit, and not since The Kid (and not again until City Lights) can I think of a comedy with so much heart and so many laughs.

Harry's a doughboy in the Great War, way more accurate with his slingshot than with his Gatling gun. He ends up captured by a German strong man, who, after the Armistice, makes Harry his assistant in his 'World's Strongest Man' vaudeville act, bringing Harry to America, where he can search for the elusive Mary Brown, the woman whom he's never met but who wrote to him faithfully during the War.

The comic set pieces that follow include Harry looking for Mary; Harry dealing with smelly cheese on a bus; Harry crossing wits (or what he has that passes for wits) with a pair of crooks trying to use him as a foil; and the riotous finale, with Harry having to substitute for the strong man in front of an unruly audience.

The film is a charming, likeable, and often quite funny feature comedy that, like Harry, works at its own pace and does so quite perfectly. With the next film, another Capra called Long Pants (1927), things go weird, though. Is the movie subversive? A black comedy? Weird, odd, surreal, and twisted? I dunno, but it is darn funny, despite being... um...Well, let's go into the plot, shall we?

Harry is a little boy whose mom doesn't want him to grow up, so she keeps him clad in short pants. Harry spends his time reading great works of Romance and dreaming of being a great lover, and when Dad buys him his first pair of long pants he is out on the town, meeting a beautiful drug smuggler (!) on the run; he's smitten by her, and she kisses 'the boob' to get rid of him, leaving him infatuated.

His parents arrange a marriage for him to the Nice Girl next door, but Harry arranges to murder her on their wedding day so he can run off to the City and find the drug smuggler. No, no, you didn't read that wrong. Harry takes Priscilla Bonner out into the woods and tries to shoot her, but he fails (thankfully for her and all of us) and instead runs off to the City anyway, where he helps his lady love escape from prison and flee from the cops. Eventually, he realizes what kind of gal he's hooked up with, and heads for home and family.

The opening sequence is a montage of images illustrating Harry getting romance novels from the library without actually showing him at all, and it's a brilliant little piece that's funny without actually doing anything funny, a pretty good synopsis of Harry anyway.

Harry's reaction to stuff is wonderful, his pantomime is terrific, and some of the extended sequences are simply prime Langdon - when he wears his pants for the first time and sees the floozy, the film takes several leisurely minutes while Harry shows off his trousers and then tries to get her attention by posing and doing bicycle tricks; hilarious and unique. Harry's reaction to the fight that ends the film is a scream.

Some of the reviews of the time thought the film was tasteless, and it appears to have been a box-office failure, which may have partially led to Langdon's decision to fire Capra and take over directing himself. Meanwhile, Mack Sennett started releasing and re-releasing old Langdon films to capitalize on his former star's feature fame, which probably hurt the popularity of Harry's new movies.

In his next film, The Chaser (1928), Langdon is a carouser being sued for divorce; the Judge sentences Harry to wear a dress and act like a housewife for 30 days, so Harry tries to kill himself and then, failing that, runs away from home with Bud Jamison. Then he comes home and makes up with his wife, who's missed him.

The New York Times, in its contemporary review, said Harry was a good actor but that his director was rotten. (He directed this himself.)

First of all, know that this isn't a funny film. And I really find it fascinating that some of Harry's great proponents claim he was a genius ahead of his time and all of his standing and looking at the camera with a blank visage is some sort of Alain Resnais-like something. I only laughed twice during the entire film (Harry's flirtation with a woman at a picnic and Harry's reaction to his car falling off a cliff) and both of those laughs came in the movie's last reel, where I'm sure 1928 audiences were sleeping or sneaking across the hall of the multiplex to see something else. (And yes, I'm aware they didn't have multiplexes in the 1920s.)

Harry's obsession with death simply isn't funny, nor is his carousing. Some of the film is uncomfortably weird; nobody seems to recognize Harry in a dress is a guy, and the delivery men and door-to-door salesmen keep kissing him: are we supposed to infer they were doing the same to Harry's wife? Or what?

Audiences left him in droves (or in Fords, more likely) and First National barely released his next and final self-produced comedy, Heart Trouble, which has never been seen from that day to this. He went to Hal Roach for one season of not-good 2-reel talkies, and then to Educational Pictures for a bit (more not-good talkies) and then to Columbia, where he did some shorts. He co-starred with Al Jolson in a pretty good film called Hallelujah, I'm a Bum and subbed for Stan Laurel as Oliver Hardy's partner for one film when Stan was out in a contract dispute.

Harry passed away just before Christmas, 1944 and has been pointed to ever since as how not to manage your career. But new generations discovering his best work are sure to find something special and unique -- and very, very funny.