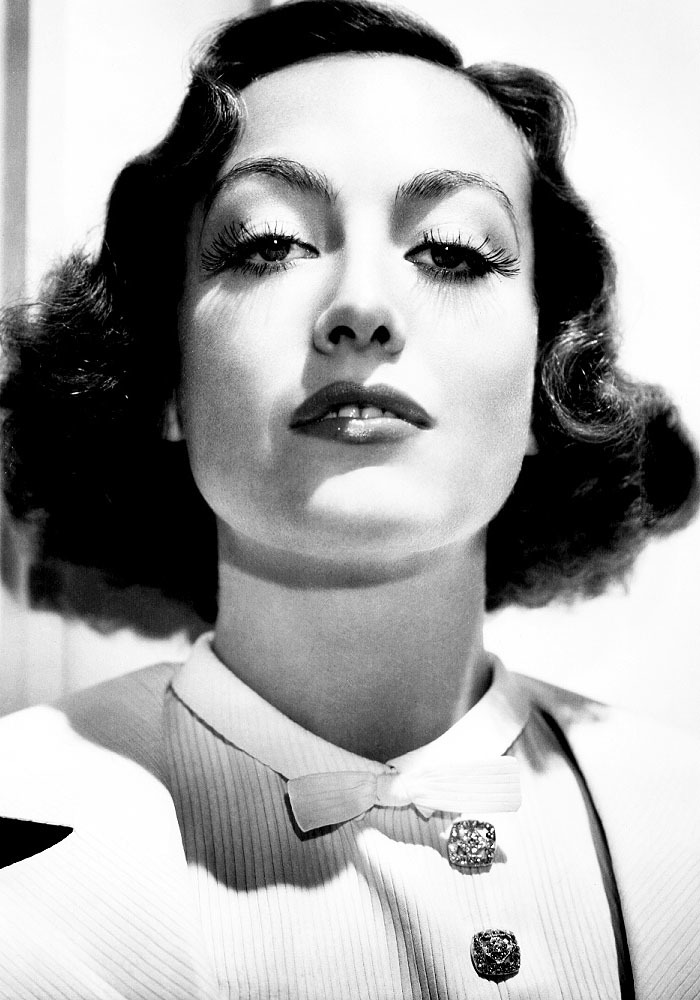 There is no better example of a movie star than Joan Crawford. Crawford was a leading lady by 1926 and was still playing leads at the end of the '60s.

Today it is easier than ever to see her films. Over 60 of her 82 features are in print, including six of her silents and virtually all of her films in sound.

Crawford watching is addictive. She makes a loud screen statement in every scene and dares you to look away. Some rules of engagement:

1. Expect a star performance. Joan credited John Gilbert with showing her that a star must be larger than life. She was known for getting so involved in tragic scenes that she'd be weeping long after 'cut' was called. While he worked as a scenarist at MGM, F. Scott Fitzgerald wrote of her, 'You can never give her such a stage direction as 'telling a lie,' because if you did, she would practically give a representation of Benedict Arnold selling West Point to the British.'

2. Pick your favorite Joan. She outlasted just about all of her contemporaries from the silents. Considering Lillian Gish and Gloria Swanson left the movies for entire decades, Joan stands alone. She was a star for three generations of fans - a flapper in the '20s, a determined shop girl in the Depression, an elegant society woman into the '40s, a tough Warners heroine for the postwar years, and a star of garish thrillers in the '60s.

3. Enjoy the Crawfordisms. She stood only 5'3,' but Crawford was imposing with her famous shoulder pads and high heels. And notice how Joan throws her head back to deliver key lines; in her '30s films, she often has the line 'Say, listen,' rolling the l to strong effect. In the '40s and '50s, Crawford must have lobbied her directors to shoot what I call the 'Crawford Shoulder Shot:' dialogue with Joan speaking to the camera and her leading man shot over her shoulder, feeding his lines to the back of her head.

Whether you take the full ride or customize your tour of Joan's movies, here are some fun stops to make:

The Unknown (1927) Joan is the ingenue in this Lon Chaney thriller, directed by Tod Browning. Amputation is the theme (or fixation) of the story, which is bizarre even for Chaney and Browning. Joan is persuasive in her first important role at MGM.

Our Dancing Daughters (1928) This is Joan's breakout film with her as a fearless party girl in this absurd and wonderful Roaring '20s melodrama. Also notable for Anita Page as the bad girl.

Paid (1930) Joan goes to prison and comes out seeking revenge. The plot points are ridiculous at times, but it's worth seeing for the flashy acting of the female cast members (Crawford, Marie Prevost, and Polly Moran.)

Dance Fools Dance (1931) In Joan's first teaming with Clark Gable; he's a gangster and her mortal enemy. The plot was inspired by a scandalous murder that occurred in Chicago months earlier. The picture opens with the famous yacht party scene of Joan and her friends stripping down to their skivvies for a night swim.

This Modern Age (1931) Joan is a blonde in this sizzling soap opera about a socialite who pays for her loose lifestyle and that of her even wilder mother (Pauline Frederick). Frederick had played leads in this sort of story back in the teens; it's fun seeing her reverse roles with Crawford.

Possessed (1931) Glossy soaper with Joan as the mistress of millionaire politician Clark Gable. Script was daring then and a fascinating artifact today. Joan's acting is confident and her clothes are the last word in fashion; she was a top box office star in '31 and this film was a smash.

Grand Hotel (1932) One of the earliest and best of the all-star films. Joan is a stenographer on the make among the rich and humble who flock to the title location. Modern viewers who know Crawford from her '50s and '60s roles are stunned by her vivacious appearance here. Her co-stars include Garbo, Beery, Stone, two Barrymores, and an eloquently understated dachshund.

Dancing Lady (1933) This was Fred Astaire's first picture, and Joan was his first screen dance partner. The main story is a romantic triangle of Crawford, Clark Gable, and Franchot Tone. Despite her early years as a night club hoofer, she had limited dancing skills, but this is no problem in the long finale, as she is surrounded by dozens of chorines on gargantuan sets. The Three Stooges wander in and out of the film, as do Nelson Eddy and Robert Benchley. Dancing Lady was a massive hit in '33. Magical moment: Fred and Joan sashay between two chorus lines in the hot jazz 'Heigh Ho' number, Fred in a cutaway and top hat and Joan in a gossamer gown topped with a gigantic feathered bolero.

Chained (1934) Trite story with the unlikely triangle of Crawford, Gable, and Otto Kruger. But this is the year in which MGM's makeup, hair, wardrobe, and lighting bring Crawford's glamour to a vivid peak. No one outside of a runway looks this good, but no matter, this is the fantasy world Hollywood creates. Key scene: Crawford and her co-stars gorge on a hacienda dinner then loosen their belts and heave sighs of relief.

The Women (1939) Joan gives her sharpest performance as the man-eater who takes down Norma Shearer's husband. Her showdown with Shearer in the fitting room is a highlight with her scathing comic dialogue. Even better is the long sequence in Crawford's bathroom as she soaks in an enormous tub, takes phone calls from her man on the side, and deals with a succession of intruders to her private lair. A pity there are so few comedies in Crawford's filmography.

A Woman's Face (1941) A lurid melodrama emphasizing character over glamour. Crawford rises to the occasion playing a woman whose scarred face makes her an outcast and, eventually, a criminal. The action finale is a bit much, but fans of melodrama and film noirs should see this.

Mildred Pierce (1945) Crawford's Oscar-winner, and a milestone film of the mid-'40s. Surrounded like she was in The Women with a cast of scene stealers (Jack Carson, Zachary Scott, Eve Arden and Ann Blyth), she gives an observant performance as a career woman whose success is torpedoed by rapacious family members. Michael Curtiz's direction and Ernest Haller's photography make this an eye-popping classic of black and white Hollywood.

Humoresque (1946) Crawford entered the late bloom of her glamour years as an alcoholic cougar who sets her sights on a young violin virtuoso (John Garfield). Ernest Haller was again the cinematographer, and his rich imagery blends with the music score to overwhelm the senses.

Flamingo Road (1949) Crawford as a carnival dancer embroiled in scandal in a Southern town dominated by a pompous sheriff (Sydney Greenstreet) is great stuff. Crawford gives a rangy, persuasive performance, even giving Greenstreet a slap; he throws a telephone at her head.

It's a Great Feeling (1949) A comedy with Dennis Morgan, Jack Carson, and Doris Day, with a hilarious Crawford cameo that's too good to spoil with a description. See it for proof that Joan could cheerfully spoof herself.

Autumn Leaves (1956) She had a telephone thrown at her in Flamingo Road and here it's a typewriter. Ouch!! She gives a heartfelt performance as Millie, a woman attracted to a much younger man (Cliff Robertson) who develops symptoms of psychosis. It's not a glamour part, and Crawford nails it. Unforgettable moment: Crawford cussing out her in-laws (Lorne Green and Vera Miles.)

What Ever Happened to Baby Jane (1962) The ultimate diva smackdown. Fun to watch simply to contrast the acting strategies of Bette Davis (full-bore Guignol) and Crawford (understatement.)

I have neglected many films which are favorites of Joan's fans. Even an outre kitsch wallow like Female on the Beach (1955) is a bonbon. (Joan to beach stud Jeff Chandler: 'I wouldn't have you if you were hung with diamonds -- upside down!') The star career Crawford spent her life creating has left a body of work that is an archive of the dream factory.