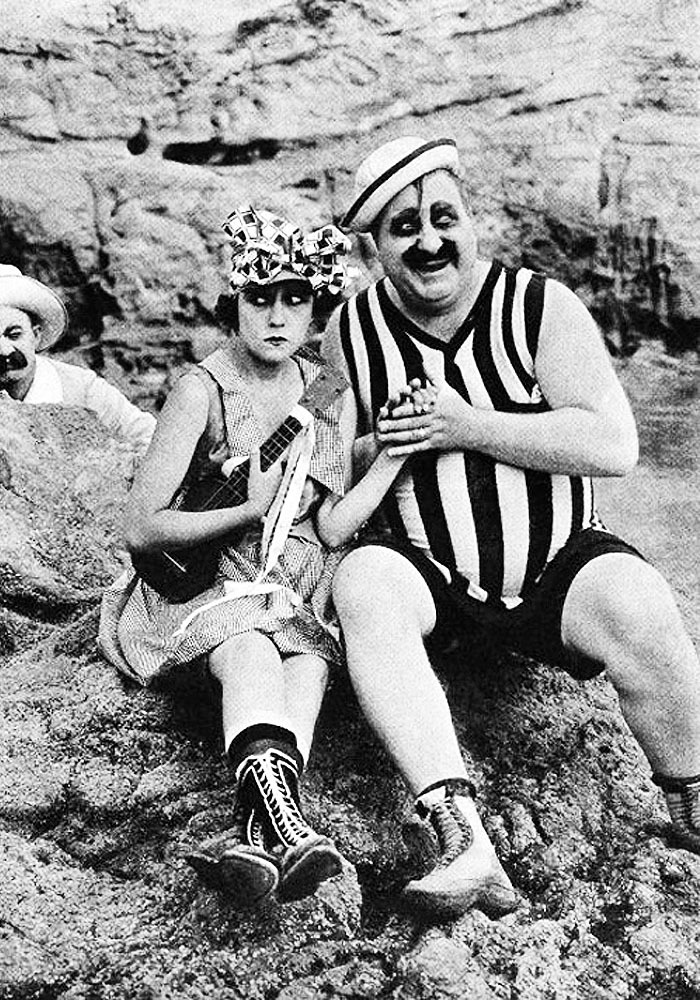 Silent Cinema: A Not-So Quiet Trip to the Beach

Beach movies may be intimately associated with bikinis and post-war nostalgia but the fact is motion pictures have been going on vacation to the ocean from the very beginning; surf, sand, swimsuits and an excuse for a bit of fun. Who can blame filmmakers for taking advantage of the setting?

To get into the summer spirit, here are a selection of silent films that take full advantage of their beach setting, a combination of famous and obscure, comedies and dramas. Best of all, they are a great deal of fun.

The early days of comedy

Mack Sennett was the king of slapstick in his heyday and the Keystone Cops are still considered a pop culture landmark. Of course, Sennett did not just have comical police wielding clubs. He also had lovely young women in swimwear who always seemed to be frolicking in the water just in time for the camera crew to capture them at play. Sennett's Bathing Beauties were a draw for his comedies for years and even featured players had to take their turns in swimming gear.

Gloria Swanson denied that she was ever a Bathing Beauty -- she merely posed in a swimsuit -- and she has a point. After all, if swimwear is the only requirement to be a bathing beauty, then Mack Swain must have been one too.

Two of Keystone's biggest stars, Mabel Normand and Roscoe 'Fatty' Arbuckle, starred in a particularly cute beach comedy in 1916. Fatty and Mabel Adrift tells of a pair of newlyweds who make the fateful decision to honeymoon at a cottage by the ocean. Al St. John is a jealous rival who sets the house adrift, fulfilling the film's title. There is some cute business with the floating cottage but the comedic chemistry between Normand, Arbuckle and St. John is the real centerpiece of the picture.

Of course, the beach comedy was not exclusive to America. In the 1913 French comedy Max Takes a Picture, Max Linder spends the picture attempting to take a swimmer's photo in her bathing costume. His frenzied efforts and her attempts to evade him create a light and charming comedy short. Linder is as dapper as can be in a light cardigan and linen trousers, surely the best dressed man on the beach!

Legends on the beach

Island, beach and Hawaii-themed films were popular in the 1920s and they came in every flavor from serious to frivolous. There are many fun films to choose from but you can't go wrong with Hula, Clara Bow's 1927 romantic comedy. Bow plays a mad young miss born and raised in Hawaii and who spends her days riding and swimming until she falls for Clive Brook.

Their meet cute scene is particularly Bow-ish, with Clara bursting into Brook's room to catch her runaway dog and diving under his bed before he can gather his wits. Then she openly ogles at him and tries to show him the boo-boo on her thigh. She follows this up with a rather provocative hula performance. It's a silly plot but all in grand fun and Bow's fans should find plenty to love.

Another silent movie legend took to the beach in 1918. Rudolph Valentino's career was still in its infancy when he took the role of the villain in The Married Virgin. In order to win over a rich heiress, Valentino frolics on the beach of Coronado, the same setting made famous by Some Like it Hot. It's all terribly kitschy, but in a fun way, and we also get to see Valentino in an abbreviated swimsuit, a real draw for many viewers, though your mileage may vary.

The beach isn't always a place of fun and romance. Sometimes, it's a perfect place for murder. The Mystery of the Rocks of Kador is a 1913 French mystery set mostly on the beach. Director Leonce Perret creates a wonderfully menacing atmosphere under the bright sunshine and the movie's visual sophistication is an enormous part of its appeal. There is an eerie scene in which the film's heroine wakes up in a small boat floating on the water with the body of her lover by her side. The image would not be out of place in an Edward Gorey illustration.

Speaking of mysteries, no list of this kind would be complete without The Mystery of the Leaping Fish, Douglas Fairbanks' 1916 comedy. Doug plays a detective called upon to uncover an opium smuggling ring. The key to the investigation is a small shop that rents out giant inflatable fish -- innocuous toys used to smuggle the drugs. There's no point in discussing the plot because it's just a mad bit of nonsense designed to hang drug jokes on.

It's certainly a film to throw silent movie doubters off balance as they have likely never seen anything like it. Even silent movie fans can be taken aback by the frank use of illegal substances. And, in keeping with the beach theme, Fairbanks dives into the ocean and gets his head stuck in the mud of the sea floor. Poor fellow.

Bessie Love is the leading lady of The Mystery of the Leaping Fish but it wasn't her only time on the beach. She plays an adorable castaway in the dark drama The Sea Lion, starring Hobart Bosworth. Bosworth plays a bitter sea captain who hates everyone and everything since his wife left him for another man.

Love is discovered on a desert island and her charming innocence begins to melt the old sea dog's heart. He begins to fuss over her like a father and it seems like she may save his soul. Then a few secrets from the past are uncovered and everything goes south. A bit on the dark side but sometimes the sunshine gets to be a little bright and we need the darkness as a break.

The silent era created many, many more fun summer films and these are just a few of my favorites. What are your favorite beach films?